Capacitor Charging and Discharging when connected to the ground

When we charge a capacitor using a battery and then remove the battery, the plates of capacitor becomes charged. One holds positive charge and the other one gets equal negative charge. o. k. ?

Now consider a situation when we connect 4 capacitors A,B,C,D of equal capacitance in series and connect them to a 10 Volt battery.

My question is why in this case negative charge climbs on this positive plate of D and makes its potential zero ? But such thing does not happen when we connect positive plate of a charged capacitor to the ground.

The net charge of any of those internally connected pairs of plates is always zero. That is, when you charge the capacitors, charge doesn't leave the wire between C and D, it only moves along it, and is held in place by the electric field of the adjacent plates. If a circuit is completed that allows charge to flow from D's negative plate to A's positive plate, the charges will move back to the right place, but the net charge of the 4 capacitors will always be the same.

Connecting the positive terminal of A will not allow charge to flow back from D, so nothing will happen. Similarly, connecting the wire between C and D won't make charge flow in or out of it, at least not in any way significant to the circuit. It only changes the reference for where we make our measurements from.

That common reference point is called "ground" or "common", and can be any point in the circuit, as long as all other voltages are measured relative to it: 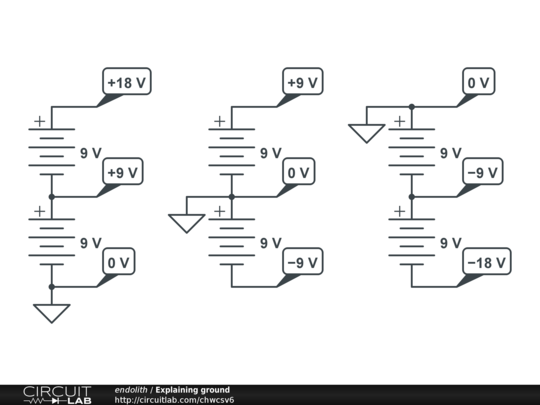 These are all identical circuits. The charge on the pins is identical, the voltages between pins are identical. The only difference is which pin we choose to call ground while measuring. Typically you would choose the bottom or middle, like the first or second pictures, but this is just a convention.

When you "charge" a capacitor, have you added charge to the capacitor? No. The total charge of the capacitor is always the same. You've just moved some of the charge from one plate to the other. The word "charge" in this case just means "to fill up with energy", just like you can "charge" an inductor with current or "charge" a scuba tank with air or "charge" a cannon with gunpowder. It's an unfortunate terminology.

It is possible to add charge to one plate of a capacitor, but you won't be able to add very much. It's like charging a metal ball. In this case, you're connecting a voltage source between the Earth and the ball, and moving charge from the Earth to the ball. You're charging a capacitor made up of the Earth as one plate, and the ball as the other. The capacitance of this capacitor is very small, because the "plates" are so far apart, so to move any noticeable charge, you need to use thousands of volts.

For flow of charge, the circuit should be closed. In open circuit, no charge flows. If we connect both the capacitor plates it makes closed circuit, charge flows in the circuit, as a result charges on the plates neutralizes to zero.

If only +ve plate of the capacitor is only connected to ground there is no closed circuit. no charges flows from the ground.

It really helps answer this question if you draw the entire circuit, including Earth and any parasitic capacitances between each conductor/component and the Earth.

For example, if an inductor is in parallel with a resistor, and a decaying current is producing 10V across them ...what if the entire circuit is charged to 5VDC wrt earth? You have a charged resistor and charged inductor involved: an inductor treated as one plate of a capacitor, the other plate being earth.

DON'T DON'T DON'T ask questions about capacitive circuits at this point, since that easily forms a direct road to total confusion. First attack any hidden misconceptions by asking yourself about charged-up resistors, wires, batteries, inductors. Each component becomes one plate of a capacitor, where the other plate is Earth.

Once you've explored the topic of "one-plate capacitors," and understand what's going on, then you probably can approach charged-up capacitors without having everything totally derailed by your prior misconceptions.

Charging up an entire capacitor, treated as a unit, is no different than charging up an entire wire, or a resistor, or a coil. You treat each of these as one plate of an approx. tenth-picofarad capacitor. Think: what's the value of a capacitor where one plate is a half inch across, the dielectric is a yard thick, and the other plate is the ground surface?

Then take a look at: engineer's capacitor, a metal sphere with an extremely narrow gap sliced through it.

Not the answer you're looking for? Browse other questions tagged homework-and-exercises electricity electric-circuits capacitance batteries or ask your own question.

0
Capacitors discharging in series
14
Will a charged capacitor discharge if one lead is connected to ground?