How does magnetic hysteresis (ie. the B-H curve) transform the input-output of a guitar pickup or speaker?

I understand that magnetically dependent equipment like a guitar pickup or speaker are affected by magnetic hysteresis.

Here is an article discussing the effect on speakers for example. That article summarizes its etiology pretty well and shows a B-H curve they measured of: 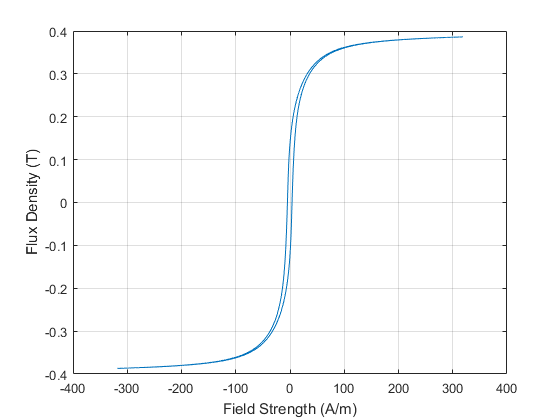 As you can see there is a gap between the upswing and downswing (hysteresis) as well as a very strong saturation effect in flux density (B) when driven to major extremes of field strength (H).

A guitar pickup should also be subject to the same hysteresis and saturation effects of magnetism. A pickup's function is summarized as:

So I believe a guitar pickup is measuring fluctuations in the magnetic field as the string moves up and down within the range of the coil. Faraday's law states that the electromotive force (EMF) is given by the rate of change of the magnetic flux:

where $E$ is the electromotive force (EMF) and Φ is the magnetic flux. I believe the EMF represents directly the voltage out of a guitar pickup for example.

Let's say you are trying to simulate the input-output transform from the BH hysteresis/saturation curve of an audio signal going through a magnetic device like a speaker or guitar pickup. For a speaker you would have as input the audio signal and for a pickup the amplitude/velocity of motion of the string fragment moving up and down within the range of the transducer or magnetic field.

How do these "input amplitudes" relate to the BH curves to dictate the output effect?

What I mean is for example, if the $x$ axis of a BH curve relates to your input signal, and the $y$ axis relates to the output, what is the relationship? Could $x$ (H) be taken directly as your input signal (input audio for speaker or amplitude/position of string fragment for pickup) and $y$ as your output signal directly?

The part that throws me off is they say EMF is the time derivative of magnetic flux. If for the pickup, H (magnetic field strength) is directly related to the amplitude of the string position, then you transform that amplitude of string motion by the BH curve into B (flux density), you'd then have to take the time derivative of B to get EMF, which will no longer be an "audio signal."

The only way I see to get an audio signal out is to transform the input/output directly (ie. string position in (H) = voltage out (B)).

How does this work? Thanks.

In a loud speaker a current carrying coil is driven by the fixed magnetic field from a permanent magnet. Hysteresis is not a problem. In the guitar pickup, the external field may vary with the position of the wire. This may put some variation in the field from the wire.

R. W. Bird is right. Magnetic saturation effects do not occur in the loudspeakers or pickups used in electric guitars, because they are permanent magnets and they are not being alternately magnetized and demagnetized as they function.

There is however a significant number of other saturation effects which act very strongly in guitar amplifiers- especially ones that use vacuum tubes- which are responsible for their tonal characteristics. In general they all act in the same way: as you put a stronger and stronger signal into the amp and speaker combination, there comes a point where for example the input tube hits its limits, runs out of poop, saturates, and fails to follow the peaks of the input signal. Those peaks get smooshed down, an effect known as clipping, and the clipped signal gets frequency content (harmonics) added to it that the original signal did not have.

That clipping response is what you pay thousands of dollars for when you buy an old-school tube-powered guitar amp from the 1950's or, for example, one of my own guitar amp models that I build as a hobby.

Tube clipping in the preamp stage of the guitar amplifier is just the beginning. Every individual tube stage of the guitar amp circuit has its own unique topology and will clip in its own idiosyncratic way, adding the the general scrum. In addition, when the tube amp's power supply nears its design limits, then it too begins to "choke" and the overall output power of the amp can rise no further, an effect known as "sag"- which alters the amp's tonal response some more.

Since the output transformer (which matches the high impedance of the tubes to the low impedance of the loudspeakers in a tube amp) is electromagnetic, its core can saturate when driven hard and hence add its own brand of clipping to the signal path.

0
How is this the graph of induced emf against angle for a rotating coil in a magnetic field?
5
Flux cutting and flux linking?
3
Inductive sensor - How does it work?
0
Can you demonstrate Faraday's Law using self induction
0
Does a dynamic microphone produce a derivative of the input sound waveform?
1
How is an EMF induced in a coil? Is this a correct explanation of induced emf and Lenz's Law?