The Christoffel symbols are symmetric with respect to the lower indices. This property is based on the geometric condition of path independence of the incremental vector. (Geometry of the flat space supports this property.)

See the attached image for the verification of symmetry of basis vector in a curved space. But this leads to contradictory results for the unit vector derivatives.

It therefore becomes difficult to write the expressions for the unit vectors and define a coordinate system for the curved space. Hence, it is difficult to write a force vector or any other vector. To overcome this problem, it is assumed that the space is normally curved and approximately flat in a local inertial frame. This assumption can help us to write the vectors locally, but still not sufficient to provide the geometrical justification for the Christoffel symbol symmetry in a curved space.

Should we attempt to get desired results (similar to the Schwarzschild metric results) for planetary orbits from the three-dimensional flat-space Lagrangian analysis, by making appropriate modifications in the potential function? 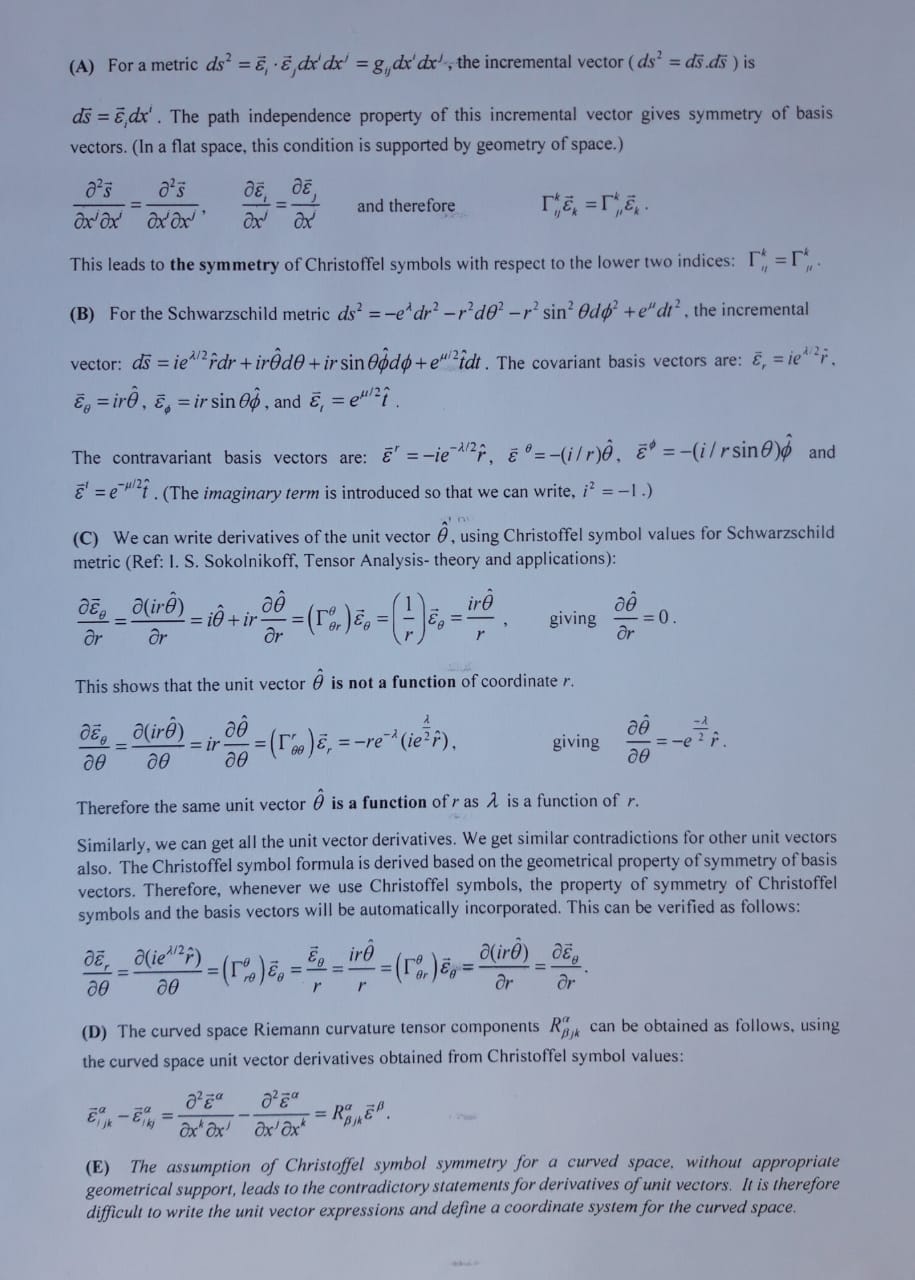 I don't actually understand what it means to "draw a geometrical picture of the four-dimensional curved space-time to write an appropriate Christoffel symbol formula." The answer to the title question,

is no. The Christoffel symbols are symmetric in their lower indices by definition.

You're always free to do this. However, in general the basis $\mathbf e_\mu$ is not a coordinate-induced basis, meaning that there is no possible coordinate system $y^\mu$ such that $\mathbf e_\mu = \frac{\partial}{\partial y^\mu}$. As a result, the basis vectors may not commute with one another, which implies that the connection coefficients as expressed in this basis will not have symmetry in its lower indices. However, note that using the definition I gave above, these connection coefficients should not be called Christoffel symbols, because the latter specifically refer to a coordinate basis; instead, the name spin connection is typically used. For more information about this, see this nice answer by ACuriousMind.

$^\dagger$Whatever resource you're using apparently incorporates the imaginary unit such that the metric components are $\delta_{\mu\nu}$ rather than $\eta_{\mu\nu}$. This seems misguided to me, as it obscures the geometrical nature of the theory.

Not the answer you're looking for? Browse other questions tagged general-relativity differential-geometry metric-tensor symmetry tensor-calculus or ask your own question.

8
Energy-momentum tensor and covariant derivative
2
How to properly construct the electromagnetic tensor in curved space-time?
3
Prove Christoffel Symbol Identity
0
Can we modify classical total energy equation to get desired results (Schwarzschild metric results) for planetary orbits in a Lagrangian analysis?