Why is the power of a car limited?

As an introduction this is what's written in my textbook:

(as distance over time = speed)

Note: If the power is constant and the body is accelerating then the speed is changing thus the driving force must also change to keep the power constant.

And in most of the questions we solved in class we assume that the power (of a car) is constant and the "note" in the text I mentioned explains how it will be constant and I understand that.

What I don't understand is why will it be constant in the first place? Shouldn't the car exert the same force all the time— so the speed will increase increasing the distance— and thus the work done will increase as time passes and the power will keep increasing?

My teacher informed us that we "assume" that the power is constant and that it variates between a certain range.

• Yet why does the power have to be limited to a certain range? Why doesn't it increase forever? Or at least increase until it comes to its maximum speed due to air resistance?

• Why does speed decrease when the driving force gets bigger even when there's no friction to prevent the car from speeding up forever?

• Yet why does the power have to be limited to a certain range? Why doesn't it increase forever? Or at least increase until it comes to its maximum speed due to air resistance?

This has to do with how an internal combustion engine works.

The power generated by an engine depends on, among other factors, how well the engine can "breathe" that is whether it is getting enough air through the intake valves. As the rpm of the engine increases, it needs more and more inflow of air, but the intake valves of engines can only provide so much airflow.

This is the reason that automobile engines can provide power only within a certain range of rpm.

As you can see in the diagram below (which shows the power curves for both a gasoline and a diesel engine), the power starts to increase with rpm , but after a certain rpm it starts to plateau and then decreases 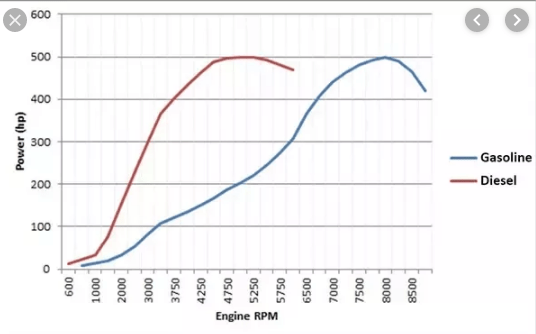 A car's engine turns the energy stored in gasoline into kinetic energy. How fast it does that is essentially the car's power (energy released divided by duration). A car engine usually takes several hours to burn a tank of gasoline, and is limited by the size of the combustion chamber, diameter of the fuel lines, air intake, and a bunch of other physical factors that limit how fast the engine burns gasoline and turns it into kinetic energy. If a car's engine had unlimited power, it would mean that you could burn an entire tank of gasoline in a fraction of a second, releasing all the energy at once and accelerating the car at an unrealistic rate. This is not possible - pressing harder on the accelerator won't make the engine suck up the entire fuel tank at once, there is some limit on how fast it can burn the gasoline. When you "floor it", the car is operating at its maximum power output, turning gasoline into kinetic energy as fast as it physically can. In most physics problems, we assume that the car is always flooring it, accelerating under the condition of maximum, constant power output.

Power is work done per unit time. When we say there is constant power (or in a limited range) we actually mean work done increases linearly with time, that's it.

What I don't understand is why will it be constant in the first place? Shouldn't the car exert the same force all the time— so the speed will increase increasing the distance— and thus the work done will increase as time passes and the power will keep increasing?

I think you are a little confused here. "Power is constant" is a situation which we are considering here. This is the case that your book decided to cover first and this is also where we get the formula and definition for "power". When we are clear with all that we can go on to variable power and how to deal with those.

So, now we move on with the assumption that power has to remain constant.

How do we achieve that?

I think your book answers that question pretty well

To answer your last two questions you can consider this -

Say power is applied by the car due to which it moves forward. Now the power produces some force, and due to the force there is acceleration and that implies there is an increase in speed. The relation between speed and power is not linear, the same constant power can increase speed to a much great extent later, then what is increased in the first few seconds. But all of the increment happens if power isn't constant.

But here it is.

So some balancing will be done to keep the power constant(That is just the case we are considering for now, in your book and the example). Like if force increases speed will decrease and if speed increases force will decrease.

1.Consider for a moment a car applying a force by the virtue of its internal mechanism, let just about an equal amount of force be applied on it by the force of an external factor say 'wind'. Now the car just about moves with some small speed and as it keeps covering the distance, the work done by the car keeps increasing and so does time. Hence, Power is constant.

2.Power is limited to a range as after some time it becomes impossible to match up with the passage of time. This is just the efficiency of the car at hand.

3.There is air resistance, and again energy wasted by the car's inefficiency.

Yet why does the power have to be limited to a certain range?

Aside from the power limits of car itself, as stated in @silverrahul answer, power is limited because there is an upper limit to the driving force on the car equal to the maximum possible static friction force between the tire(s) of the drive wheel(s) and the road, which is given by

where $\mu_s$ is the coefficient of static friction between the tire(s) and the road and $N$ is normal reaction force of the road on the tire(s). Once $F_{max}$ is exceeded, the tires begin to slip preventing acceleration.

Neglecting air resistance, the static friction force is the only external force acting on the car. It acts forward and is equal and opposite to the backward force of the tire on the road due to the torque applied to the wheel(s), per Newton's third law.

Not the answer you're looking for? Browse other questions tagged forces classical-mechanics power or ask your own question.

2
What does the equation $P=\vec{F}\cdot \vec{v}$ really mean?
0
what causes a decrease in velocity?
1
infinite power from constant force?
0
Acceleration with zero initial power?
0
Behavior of force, velocity and acceleration when the power output becomes constant
0
Why must the driving force on the car increase to keep the acceleration constant?
0
Why is Power caused by the driving force?