Euler-Lagrange's equations for a Lagrangian $L$ read $$\frac{d}{dt}\frac{\partial L}{\partial \bf v} = \frac{\partial L}{\partial \bf x} .$$ More precisely, the statement is that a trajectory $\gamma:\mathbb R\to M$ that minimises the corresponding action $\gamma\mapsto \int L\circ d\gamma$, satisfies the equation $$A_L[\gamma] \equiv (\partial_{\bf x}L)\circ d\gamma - (\partial_{\bf v}L\circ d\gamma)' = 0.\tag1$$ Here, $M$ is the configuration space; I'm thinking of the Lagrangian as a map $L:TM\to\mathbb R$ defined on the tangent bundle of $M$ (though I suppose this is strictly the case only when $L$ does not depend explicitly on the time), and the differential is understood as the mapping $$d\gamma:\mathbb R\to TM:t\mapsto (\gamma(t),d\gamma_t(\partial_t))\simeq (\gamma(t),\gamma'(t)).$$

In (1), I defined the operator $A_L$ mapping curves $\gamma:[a,b]\to M$ into functions $[a,b]\to\mathbb R$. Euler-Lagrange's equations, in terms of this operator, thus say that if $\gamma$ is stationary for the action, then $A_L[\gamma]$ is the zero function.

I am going to use the $\infty$-jet formalism (one could also work with finite order jets but that's actually more complicated), and consider higher order variational problems as well as the case of multiple independent variables.

The dynamical field in the variation problem is identified with a (smooth) section $\phi\in\Gamma_X(Y)$, $\phi:X\rightarrow Y$, $\pi\circ\phi=\mathrm{id}_X$. One could work with local sections as well, but I don't want the added notational shenanigans involved.

In a fibred chart, the section is described by the local functions $\phi^\kappa=y^\kappa\circ\phi$ (components).

Finally, there is a mathematically rigorous way to take the limit $J^\infty Y$ as the jet order $r$ goes to infinity. This space is an infinite dimensional manifold, but it works almost exactly like a finite dimensional manifold. According to the conventions I use, all functions and differential forms on $J^\infty Y$ are globally finite order (i.e. they are induced from some finite order jet space).

The differential double complex $(\Omega^{\bullet,\bullet}(Y),d_H,\delta)$ is the "bare" variational bicomplex associated with $Y$. 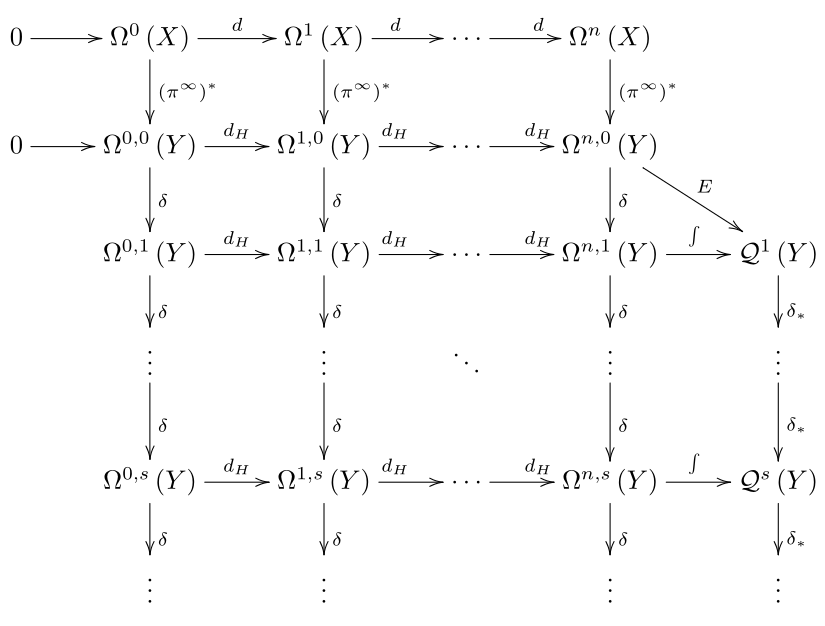 I have denoted the quotient projection $\int:\Omega^{n,s}(Y)\rightarrow \mathcal Q^s(Y)$ as an integral symbol.

These vector fields represent field variations. That is if $\phi:U\rightarrow Y$ is a local section ($U\subseteq X$ open), then $\delta\phi=\Xi\circ\phi$ is a field variation in the usual sense.

It turns out (via the usual integration by parts argument) that as long as the vertical vector fields $\Xi_1,...,\Xi_s$ have support within $D$, then this functional is insensitive to adding a $d_H$-exact term to $\omega$ (remember that $d_H$ is basically taking total divergences!)

Such integral functionals are in one-to-one correspondance with elements of $\mathcal Q^s(Y)=\Omega^{n,s}(Y)/d_H\Omega^{n-1,s}(Y)$ for this reason.

This explains why $E=\int\circ d$ - the "formal integration", which is just taking the quotient essentially performs an abstract integration by parts.

By manually performing the integrations by parts, we arrive at the formula $$ E(L)=\int\sum\frac{\partial^S\mathcal L}{\partial y^\kappa_{I}}\theta^\kappa_I\wedge\nu=\int\sum(-1)^{|I|}d_I\frac{\partial^S\mathcal L}{\partial y^\kappa_I}\theta^\kappa\wedge\nu. $$ The latter expression is essentially a "canonical form" of $E$. Remember that the integrals here are purely symbolic and they just denote the quotient projection.

There is yet another approach which is probably closer to what OP considers geometric and is often favoured in the finite-order approach. Nontheless, I can define them in the $\infty$-jet formalism as well, and it is actually simpler to do so.

An $n$-form $\rho\in\Omega^n_\infty(Y)$ (usually not of pure bigrade) is called a Lepage form if it satisfies the fact that $p_1d\rho$ is $\pi^\infty_0$-horizontal, that is in a local chart it's $1$-vertical component has the form $$ p_1d\rho=\varepsilon_\kappa\ \theta^\kappa\wedge\nu, $$ i.e. this is basically a source form. This condition is completely invariant. Such forms have some rather salient properties. For example if two Lepage forms $\rho$ and $\rho^\prime$ have the same horizontal part, i.e. $h\rho=h\rho^\prime$, then we also have $p_1d\rho=p_1d\rho^\prime$, i.e. the $1$-vertical part of their exterior derivatives are also the same.

If one has a Lagrangian $L\in\Omega^{n,0}(Y)$, then a Lepage form $\rho$ is a Lepage equivalent of $L$ if it satisfies $L=h\rho$, i.e. the Lagrangian is the horizontal part of the Lepage form.

One can then prove that every Lagrangian of order $r$ has a globally defined Lepage equivalent of at most order $2r-1$.

Then the Euler-Lagrange form associated to the Lagrangian $L$ is given by $$ E(L)=p_1d\rho, $$ where $\rho$ is any Lepage equivalent. This expression is a lot nicer than the previous $E=I\circ d$, since the interior Euler-operator $I$ is quite complicated and somewhat "unnatural" in the sense that it is defined purely in local coordinates as a specialized integration-by-parts operator, it just turns out to be globallly well defined. By contrast, for Lepage equivalents, the definition $E=p_1\circ d$ is more natural, since the projection $p_1$ is easy to calculate and comes naturally from the structure of the jet bundles.

The $\Theta_L$ is called the principal Lepage equivalent of $L$. The problem with it is that it is usually not well-defined globally, thus the correction terms $d\eta$ and $\mu$ are usually needed. However when the order of the Lagrangian is $1$ or $2$, then $\Theta_L$ is globally well-defined and "covariant". In this case it is usually called the Poincaré-Cartan form associated with $L$.

Edit: As per OP's request, here is a simpler (less technically demanding) formulation for $n=1$ and $r=1$, that is for Lagrangians of order 1 with only one independent variable.

Not the answer you're looking for? Browse other questions tagged lagrangian-formalism differential-geometry field-theory variational-calculus functional-derivatives or ask your own question.