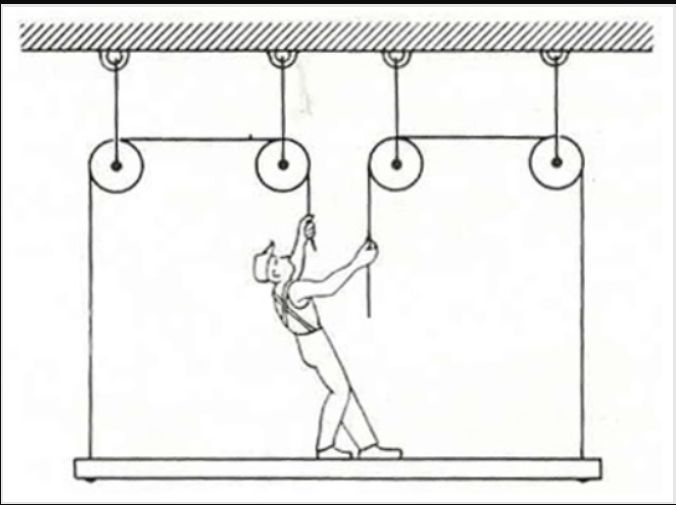 We are learning Newton laws in the University and were given the following problem: In the system described in the image, the man is pulling two massless ropes with a force of $F$ each. We are required to calculate the acceleration of the system.

And I can't quite wrap my head around how the force the man put essentially "doubled". I was given an answer of how the tension in the rope needs to be uniform through the entire rope - so with accordance with Newton second law each rope is pulling the man upwards in equal force, but also the bottom of the rope pulls up the platform in an equal force, so it adds up to $4F$.

I was hoping you could help me make sense of this problem because it doesn't sit well with me.

That's one thing that you can make a pulley do. There is no "conservation of force", so systems like pulleys and levers can increase or decrease applied forces. The increased effect of and applied force by a machine is termed mechanical advantage. Because the work done is conserved, that means if a pulley changes the force required, the distance moved by the rope system changes as well.

In this problem the person on the platform is pulling each rope with a force $F$, for a total by the person of $2F$. And we can assume that if the system is moving, the rope is pulled some length $l$ past the grip point.

Think of the scenario where the two ropes at the ends are fixed to the pulleys (so they don't roll) and the person is not holding on to the ropes. In this case, the two ropes each have a force $|F_1| = g(m_1+m_2)/2$ applied to them, and by Newton's third law, each applies $|F_1|$ to the platform.

Then, instead of fixing the two ropes to the pulleys, attach both ends of each rope to the platform (the person is still not holding onto the ropes in the middle, they are just directly attached to the platform). Then, each rope end must have $|F_2| = g(m_1+m_2)/4$ applied to it, and by Newton's third law, each applies $|F_2|$ to the platform.

What is the force that the two middle rope ends exert on the person?

What is the force that the other two ends of the rope exert on the platform?

Then, what is the total force exerted on the platform+person system by the ropes?

Each rope is pulling up on the man and on an end of the platform.

5
Tension of rope. Different Answers?
6
Pulley-rope tension question
0
Tension in the same string between different masses
0
Two solids linked by a rope not under tension, I apply a force on them. Is Newton law valid applied on the ensemble?
0
Tension in strings which accelerate 3 masses
1
Why is the tension on both sides of an Atwood machine identical?
1
Net force on a mass when a string (massless) is cut