Why is a relativistic observer required to show that FTL communication breaks causality?

Physics Matt has a blog on the issues with FTL communication.

At one point they use an example of a relativistic observer seeing a FTL message arrive before it is sent, to show how causality is broken.

However, the destination that is receiving FTL message will already see the message before the inciting event happens according to them.

Why is the extra observer needed for this? They say:

They hear about it early because to them it hasn't happened yet. 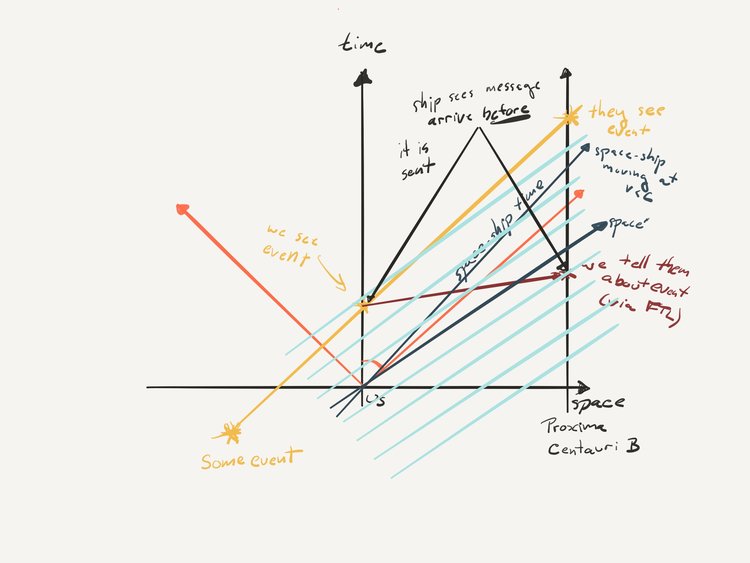 .
Ship sees message arrive before it is sent

The lines of constant time for the ship show they arrive at the destination after the message is received, but from their point of view on arrival the message hadn't been sent yet.

They show that you could, from the destination end send out a light speed message to say they got the FTL message. The Relativistic observer receives it before they arrive, but that is still after the initial event happens... causality preserved? Yes, the initial light hasn't reached yet, but that's exactly the same situation without the relativistic observer. We already lost simultaneity due to the distances involved (if the two static frames of reference were just good at co-coordinating (i.e. not relying on FTL messages) sending out a signal, it would looks like the destination sent theirs out early.)

How is this different to the case without the relativistic, third-point of view?

Two observers at rest relative to one another (as Proxima Centauri and the Earth are assumed to be for the purposes of the blog post you referenced) certainly can keep their clocks synchronized. For example, if they are 4 light years apart and Earth sends a radio message that says "it is now noon on January 1, 2100" then when the receiver gets the message they can set their clock to "noon January 1, 2104" and be confident that it will agree with the Earth clock up to the error accumulated over 4 years (which for a modern atomic clock would be less than a microsecond).

Since relativistically moving observers have different definitions of simultaneity, they disagree on the times assigned to events that are separated in space. The difference in times depends on the spatial distance. If the events are "close together" then at least they can agree about which came first, even though they might disagree on how much time elapsed between them. But for very distant events (so far apart that light could not have travelled between them) then even the ordering of the events could be in dispute.

Not the answer you're looking for? Browse other questions tagged speed-of-light faster-than-light causality or ask your own question.

4
Can FTL-Communication between two points in the same frame of reference break causality?

36
How does "warp drive" not violate Special Relativity causality constraints?
0
Why is light different than sound in terms of the assumptions we make regarding causality?
2
How does a world line of an Alcubierre drive look like?
4
Can FTL-Communication between two points in the same frame of reference break causality?
0
Causality (time travel) question