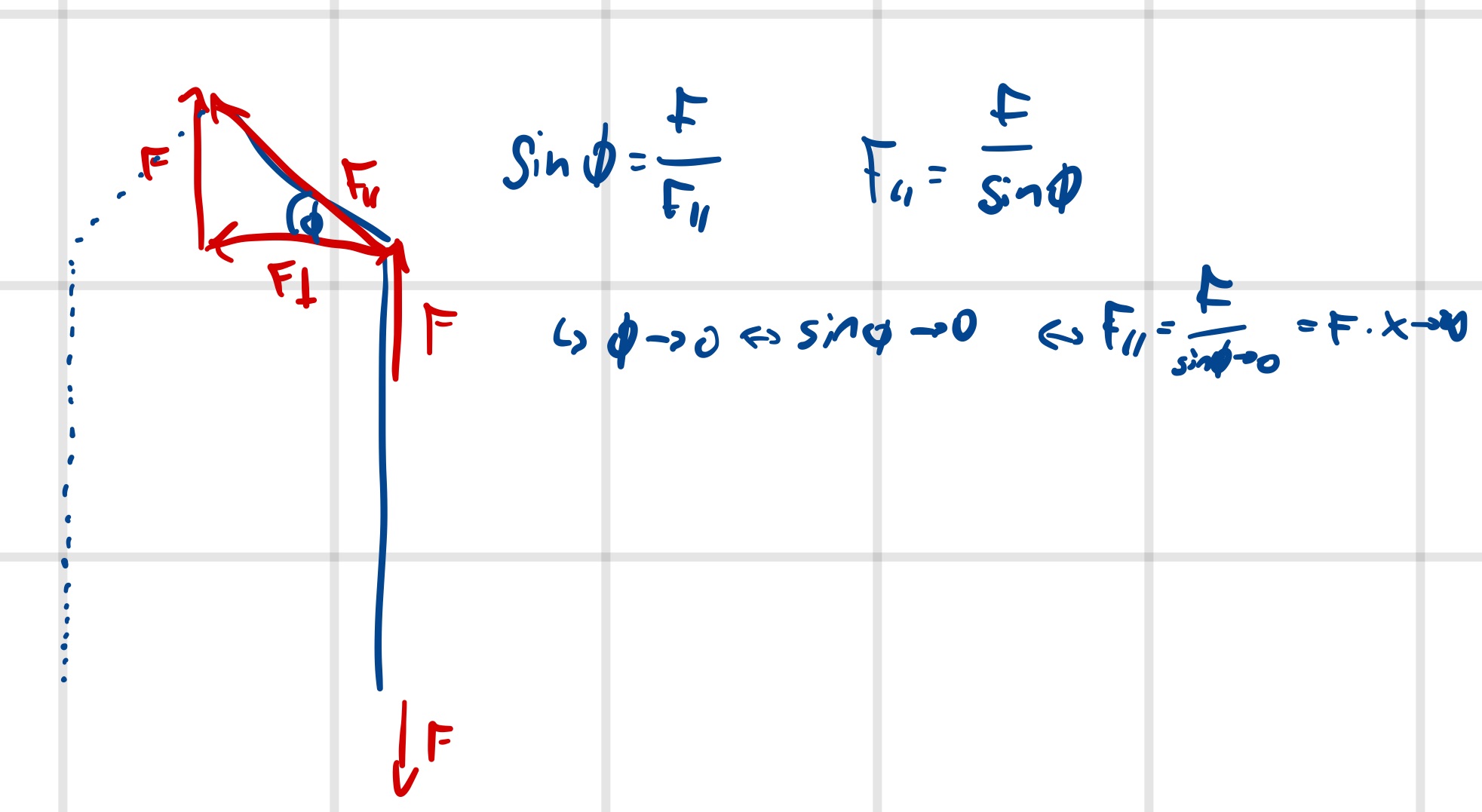 I went climbing with a friend of mine the other day. And To be able to toprope two different routes that where next to each other he set the diversion up like in the scenario B I sketched in the attached image.

Now, I somehow feel like that will put hella stress on the rope, and possible on the anchors, because the rope is running (almost) horizontally for a few meters. I'm not sure if that's right, though.

Is it a similar scenario force-wise as in the 3rd pictures on Ben's answer on this post:https://outdoors.stackexchange.com/questions/5425/why-should-the-angle-in-a-rope-attached-to-two-anchors-be-60-degrees-or-less ?

Can anyone tell me what the forces are and how to calculate the forces that act on the rope and the anchors in the 3 different scenarios I sketched?

The blue circle in A and C are where the rope is fixed, the U-shaped symbols is a (assumed frictionless) rope diversion. 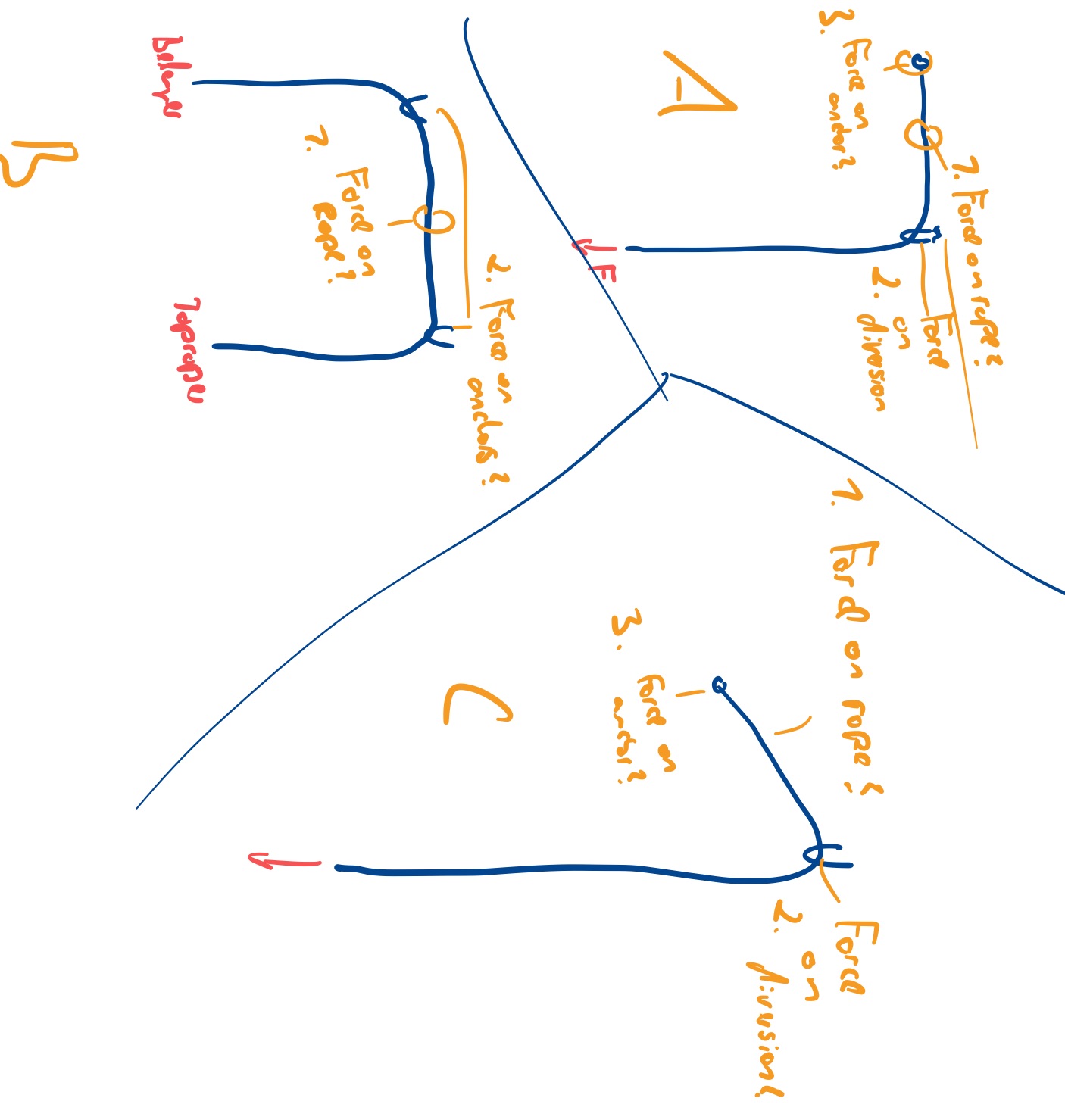 You are good with what you have picture as far as excessive force is concernced.

In an idealized case (no friction), the tension in the rope is the same everywhere. Friction can reduce this.

Suppose you had just one anchor and were leading straight up. You fall and the rope forms a sharp U. In an idealized case, the tension in both sections of the rope is the same. Both sections pull down on the anchor. The anchor takes twice the force you or the belayer take.

Suppose you are following straight up. You fall and the rope stays straight. In this case, the anchor takes no force. Nothing would change if the anchor wasn't there.

In your scenarios A and B, you have a 90 degree bend. The force on the anchor is between the two. In this case, it would be about 1.5 times the force you feel in a fall. In scenario C, the bend is sharper. The force is closer to 2.

Calculating forces is not a reliable thing. Friction is not $0$. That often reduces forces. For example, the rope rubs on the rock and the rock holds back a moving rope. The rock helps you belay.

Friction can hurt. The rope rubs on an anchor. The anchor slows the rope, but the rope pulls on the anchor. Often this is bad because the anchor was placed to support a downward force, but friction from a moving rope is in some other direction.

Also climbing ropes are designed to stretch. This slows you to a stop more gradually than a non-stretchy rope. A smaller force slows you over a longer time.

A long rope is stretchier than a short rope. For this reason, a short fall can produce a harder jerk than a long one.

Not the answer you're looking for? Browse other questions tagged forces free-body-diagram or ask your own question.

0
What is the net force acting on a climbing man by the rope?
6
Tension of rope. Different Answers?
2
When do we assume that a rope has different tensions in different places?
0
Laws of motion while climbing a rope
1
Internal and external forces
0
Forces acting on two blocks of different masses and their relations (Newton's Laws)
0
Can two people playing tug of war pull on a rope with different forces?
0
Forces in a redirected rope where both strands are loaded