Had the centrifugal force of the rotation of Earth in the past forced liquid, hot Pangea to be positioned near the Equator?

Without detailed knowledge of the involved material properties (which I don't have, sadly) it is difficult to say for sure. But I see several points that make this scenario seem unlikely to me.

Since the earth's crust is mostly solid, this is not just a question about the liquid state. First, the centrifugal force would have to be strong enough to exceed the ultimate strength of the crust material (probably something involving large proportions of Silicon Dioxide, but of course this doesn't tell much about ultimate strength, due to varying other components and microsctructure) for tangential redistribution to take place.

Then the known plate tectonic motion is driven by convective flow in the earth's mantle, which is affecting lithospheric plates due to some (effective, because the mantle is also quasi-solid) viscosity. If the centrifugal force were to have an influence on plate tectonics, it would have to be stronger than these viscous forces. On the other hand, the liquid water on the earth's surface is certainly experiencing orders of magnitude smaller viscous forces than the mantle. So it is much easier for water (i.e. the Tethys ocean) to accumulate at the equator, if tangential redistribution were a topic.

However, the most important point is, that centrifugal force does not only affect the earth's crust, but also the mantle, and since the crust has only a tiny thickness and the mantle is "more liquid" than the crust, it is more likely that the mantle will just buckle subject to the centrifugal load, which is already enough to restore force equilibrium. This slight ablation of the earth is what can actually be observed today, and I would see no reason why it should have been qualitatively different in the past.

Given all that, I would say it is rather unlikely that Pangea was drawn to the equator.

Earth is slightly bulged at equator side due to centrifugal force, so it's not perfectly round as shown in globe: 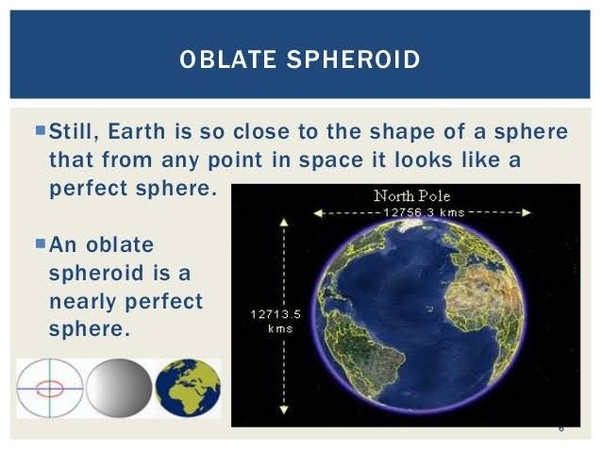 And about Pangea, it is fair to assume that the centrifugal force has some effect; yet I think more geological factors should be considered. This Wikipedia article is also useful for your question.

About the centrifugal effect:

Before contracting into a planet the proto-Earth was a proto-planetary disk. As the planet formed this disk slowly became more spherical. Because of the rotation it did not contract all the way to spherical.

Currently the equatorial radius is about 20 kilometer more than the polar radius. That means that to move from the Equator to the poles is to move downhill.

At 45 degrees latitude the local plumbline does not point towards the Earth's center; there is an angle. The angle is about 1/10th of a degree.

In order to circumnavigate the Earths axis a centripetal force is required. The downhill slope provides that force. At 45 degrees latitude the ratio is about 1/580. Take your own weight, divide that by 580. That gives the amount of required centripetal force (the amount of force in the direction perpendicular to the local plumb line.)

The forces that move the tectonic plates are due to drag from convection cells underneath the plates.

The plates are effectively floating on top of the earth layers underneath. The equatorial bulge of the Earth is such that there is no tendency to drift to the Equator, nor a tendency to slump to the poles.

The equatorial bulge is just right because the Earth contracted until a point was reached where further contraction would cost more energy than would be gained.

Not the answer you're looking for? Browse other questions tagged earth planets centrifugal-force geophysics liquid-state or ask your own question.