Interpretation of the tangent basis

I learned that for a Manifold the tangent basis in a point are the partial derivative in the coordinates direction. I understand that there aren't problems in defining these object and that they form a vector space, but can you give me a geometrical intuition about their meaning? I suppose that if the Manifold is the $R^3$ space these concepts should agree with the classical description in which vector are arrows so there should be a connection. 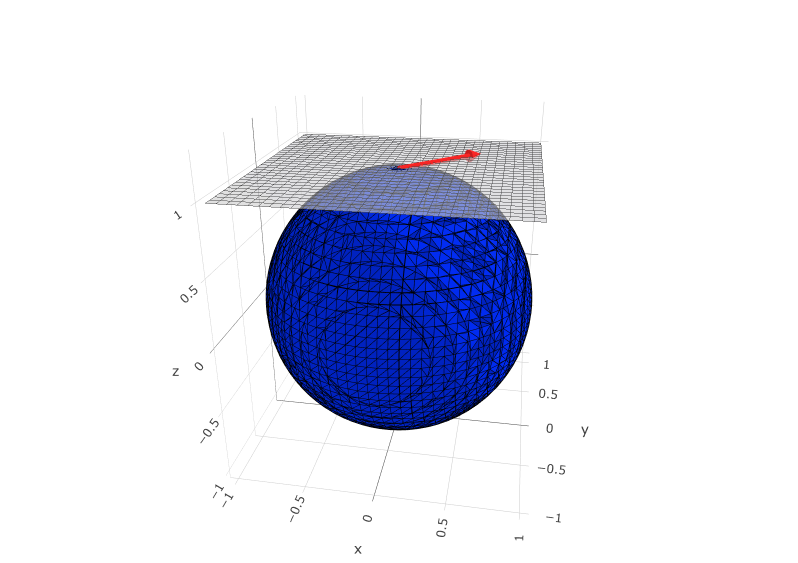 It's not hard to see that for a generic space, this could very quickly become extremely annoying. $\mathrm S^2$ is extremely simple, and can be embedded in an obvious way in $\mathbb R^3$ - contrast this with e.g. the 2-torus (which is also simple, but whose embedding is slightly less so). It's true that an arbitrary manifold can be embedded in some $\mathbb R^n$ (though figuring out which $n$ is not always trivial), but the prospect of embedding a 4D manifold into e.g. a 6 dimensional space and then having vectors with $6$ components subject to 2 algebraic constraints which depend on position is ... not appealing.

So, in differential geometry one tends to take the latter approach. Tangent vectors to a manifold are defined as directional derivative operators (evaluated at the point to which they are attached); from this point of view, in a coordinate chart $\{x^i\}$ the partial derivative operators $\frac{\partial}{\partial x^i}$ constitute a natural and convenient basis for each tangent space.

Consider a surface like a sphere. What is the tangent space at some point? It would be a vector space corresponding to different directions and speeds one can move at, at that point. In 3-space these would all correspond to vectors along the tangent plane (the local horizontal plane) to the point. Now, if you move to a different point on the sphere you will get a different bundle along that tangent plane: each vector space is separate from each other.

We need to define some basis vectors for these spaces, and this is where the tangent basis comes in. Normally we just take the differentials of the local coordinates and get basis vectors for every tangent space. As a bonus, since coordinates of nearby points tend to be similar, there is some relation between vectors in one tangent space and another one; setting up this connection is usually the next step.

(One can be more careful and distinguish between 1-forms and vectors; $\partial_x$ is a very different thing from $\mathbf{e}_x$ but in simple cases there is an obvious 1-to-1 map between them.)

Not the answer you're looking for? Browse other questions tagged differential-geometry vectors curvature vector-fields or ask your own question.

13
How can a set of components fail to make up a vector?
8
Intuition behind differential operators as the basis vectors of a manifold (space-time)
1
Coordinate vector fields associated to normal coordinates
8
General Relativity: is Tangent Space Always Flat?
1
Transporting Tangent Vectors when Taking Lie Derivatives
6
How are vector quantities in three dimensions (velocity, electric field, etc.) modeled in mathematical physics?
2
Why do the tangent vectors of coordinate curves correspond to the coordinate basis vectors?
1
Why can't a non-coordinate basis be expressed as derivatives with respect to any coordinates?