How to find the falling time of an object when acceleration is not a constant? [closed]

Ask Question
Asked 25 days ago
Active 24 days ago
Viewed 640 times
8
$\begingroup$
Homework-like questions and check-my-work questions are considered off-topic here, particularly when asking about specific computations instead of underlying physics concepts. Homework questions can be on-topic when they are useful to a broader audience. Note that answers to homework questions with complete solutions may be deleted!

Now my question is: How to calculate the falling time of the object from the peak height (70,000km) until it reaches the ground? Acceleration is not constant here. 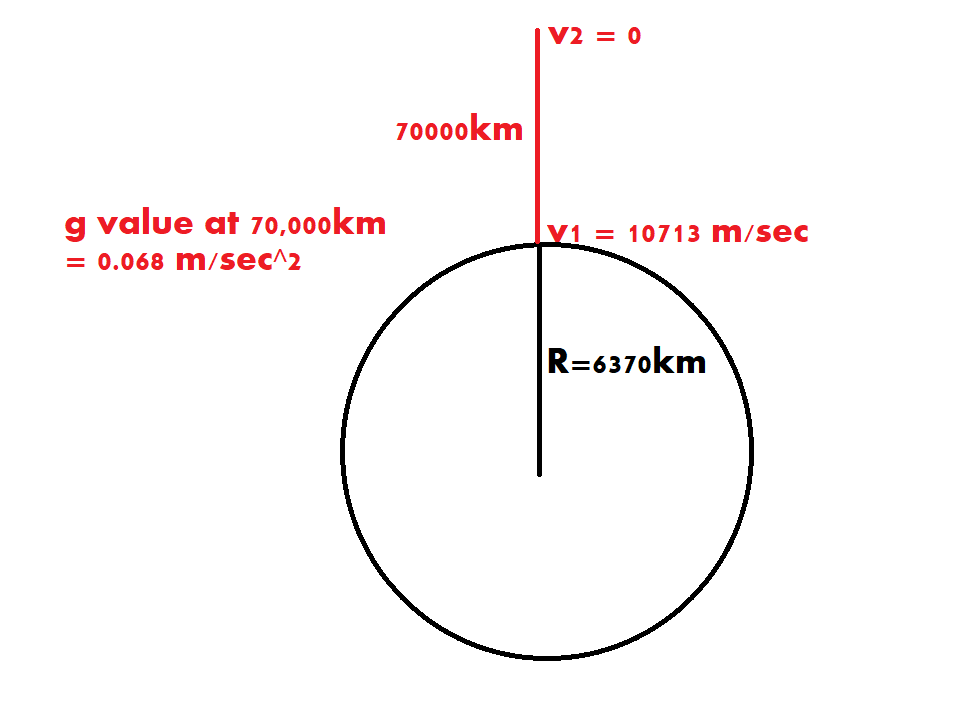 Even when acceleration is not constant one can apply conservation of energy.
Let the gravitation potential energy of the earth-object system at the highest point be $-C_1$.

By conversation of energy

Here I will explain only an alternative procedure to compute the fall time from the maximum height. However, I have to say that the other answer that uses energy is much simpler.

If you want to figure this out "without calculus", there's a way you can get a good numerical approximation using a computer.

If you take a "sufficiently small" interval of time $\tau$, then the acceleration and the velocity of the object will be approximately constant over that time period. This means that you can use the uniform acceleration equations over that time period. For example, let's suppose that you know what the initial position $x(0)$ and the initial velocity $v(0)$ are. Assuming that you know the relationship between $x$ and $F$, this means that you can infer the acceleration at time $0$ as well. Applying the uniform acceleration equations, we have $$ v(\tau) \approx v(0) + a(0) \tau \qquad x(\tau) \approx x(0) + v(0) \tau + \frac{1}{2} a(0) \tau^2 \approx x(0) + v(0) \tau $$ In the second equation, we can drop the second term because we are assuming that $\tau$ is a "small" amount of time, and a term that is a small number squared is an even smaller number.

Of course, you wouldn't want to do all of this gruntwork by hand. (Though people, often women, did do such gruntwork by hand in the past. A "computer" used to be an occupation, not a device.) But if you're familiar with a programming language, or even if you have a passing familiarity with Excel, you can probably get a computer to do these calculations for you in pretty short order.

What I have described above is what's called the Euler method for numerically solving differential equations. It is perhaps the easiest method to understand. It is also perhaps the worst possible method of its type for solving such equations, since the errors in the approximations are relatively large and in some circumstances can even grow with time. If $\tau$ is small enough, this is generally not a problem, but that means that you have to take a lot of really small time steps to get a solution that spans an interesting amount of time. There are much more sophisticated algorithms out there, and entire libraries of computer functions devoted to solving them. If you understand the Euler method and are interested in using more sophisticated & accurate techniques to solve similar problems, there are plenty out there for you to research.

Change in kinetic energy is due to work done

and since acceleration is a function of position $a(x)$, the above integral wil give you the velocity-distance relationship $v(x)$.

I will only outline an answer for now.

The object is on a suborbital trajectory. Classically this just means the objects or it is a 2 body gravitational orbit like earth and moon except the periapsis is lower altitude then the surface of the earth. Describing orbital characteristics is the same.

Now there is usually no time parameterization of the orbit. One usually has to use an approximation method like newton's method, to get the actual angle (true anomaly) from the circle angle (mean anomaly) for times ellapsed past an epoch (known position). This is due a interesting term which involves sin function, and there is no way to algebraically solve.

So basically, object experience known not necessarily constant acceleration is simple. Object orbiting from gravitational field is not so simple. It gets into transcendental functions, non linear pdes etc. That's classical gravity and differential equations for you.

Integrating twice based on acceleration due to gravity. (Keplar could also be used, but the result is the same). m1 = mass of earth m2 = mass of object, so much smaller than mass of earth it can be ignored

r is distance between the two objects

v is combined closure rate of the two objects towards a common center of mass.

Not the answer you're looking for? Browse other questions tagged homework-and-exercises gravity kinematics acceleration or ask your own question.