This is one of those "what if" fantasy world type questions. I like hard sci-fi so please no "well, you changed one thing about the world so now anything goes." :)

What if the Higgs had no vev?

That is essentially this question and I was charmed by Ron Maimon's excellent answer to it, but I was under the impression from this statement of his:

The massless electron will lead the electromagnetic coupling (the unHiggsed U(1) left over below the QCD scale) to logarithmically go to zero at large distances, from the log-running of QED screening. So electromagnetism, although it will be the same subgroup of SU(2) and U(1) as in the Higgsed standard model, will be much weaker at macroscopic distances than it is in our universe.

The combination of a long-ranged attractive nuclear force and a log-running screened electromagnetic force might give you nuclear bound galaxies, held at fixed densities by the residual slowly screened electrostatic repulsion. These galaxies will be penetrated by a cloud of massless electrons and positrons constantly pair-producing from the vacuum.

and recently reading about the log running in Shifman, Advanced Topics in Quantum Field Theory, that massless QED would be very weak at macroscopic distances. Of course, log running is slow so this seemed a little odd as well, so I decided to calculate. 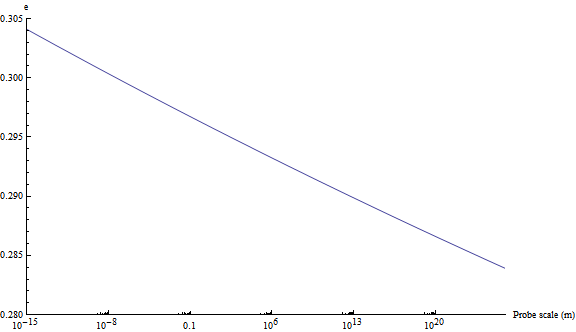 Note the scale. So the log running really is slow. Even at the Hubble scale the effective charge is only reduced by about 6%! Including $N$ massless charged flavours multiplies the beta function (yeah?):

so the coupling becomes

For the SM $N=3$ (assuming all the charged mesons are above 1 MeV - is this true?) this increases the running, but not much: 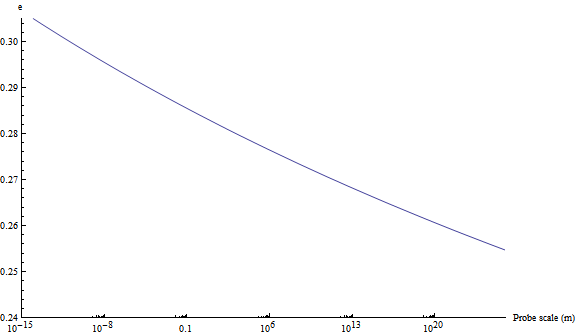 So EM is still sizable at cosmological distances if:

This was somewhat surprising to me, though perhaps only because I misunderstood the assertion. It is certainly the case that atoms blow up (Bohr radius $a\sim1/\alpha m_e\to\infty$) so life is definitely not as we know it, but EM is still an important interaction at large scales - large enough to expect matter to form neutral conglomerates much smaller than galaxies. It is not at all clear to me that the dominant effect is an electrostatic repulsion that would stabilize any kind of nuclear bound galaxy. So:

What is the real phenomenology of the Higgs-less SM? Can anyone elaborate on Ron Maimon's vision?

Let me start with a minor comment: what people refer to with 'higgsless' has a very very different meaning than no vev. It is in fact the opposite, vev non vanishing but no Higgs boson propagating.

Said this, I'd like to point out that even with no elementary Higgs field taking a vev for the Mexican hat potential there is another Ew charged doublet that picks vev of the order of $f_\pi$ of QCD, namely the composite operator $Q_L u_R$ made out of the left doublet $Q_L$ and the right-handed singlet $u_R$. In other words, chiral symmetry breaking of QCD will induce a small vev, about a factor of about 1000 time smaller than the actual EW scale of the SM. Thus QCD will nevertheless provide an IR cutoff even with no Mexican hat potential for the elementary H.

It is small wonder there is no definitive answer to this question here. But I can pass along the best answer I got.

I asked the same question, in a slightly different format, to a blog "Of Particular Significance" that is popular with Physics Stack Exchange. My question was whether the famous Goldstone Mexican Hat potential had a value of 245 GeV at the rim (vacuum expectation value) of the hat?

The answer given there (by Matt himself) was in effect: "no". The energy associated with the rim of the hat is still the same as the energy Goldstone himself posited long before the Higgs was discovered. Its value is zero.

Astrophysicists really need this value in order to make sense of the 10^116 discrepancy in the estimation of the dark energy. The bottom line seems to be that science doesn't know whether the energy of the vacuum is the equivalent of a proton mass per cubic meter, or something much larger, as suggested by the Higgs formulation of the vacuum expectation value.

To Matt's answer I would only add that 245 GeV would make perfect sense, relatively speaking, to a free Higgs energy of 126 Gev. This is analogous to the idea that while a single photon, all by itself has indeterminate energy, the energy of two photons traveling in opposite directions will always have a defined energy that can actually be observed. Think Doppler shift. How would an observer know if a single photon was red or blue shifted (different energies), or even there at all, depending on inertial reference frame. The situation is much different with two photons, and I suspect, also with two Higgs bosons, and for the same reason.

Not the answer you're looking for? Browse other questions tagged quantum-field-theory particle-physics standard-model higgs or ask your own question.

27
What happens to matter in a standard model with zero Higgs VEV?
7
Bound State of Only Massless Particles? Follows a Time-Like Trajectory?

10
More questions on string theory and the standard model
14
How to interpret vacuum instability of Higgs potential
3
How to find the Higgs coupling with a mixing matrix?
5
Renormalization and the Hierarchy Problem
4
Do Standard Model Yukawa couplings depend on the gauge choice?
5
One-loop effective potential of Standard Model
1
Physical observability of running couplings