Does the mass of a particle change when emitting a photon?

question is in the title. It came up since we're currently dealing with 4-vectors and collision/decay processes.

At a first glance I thought that it should be possible because of the energy/mass equivalence but then again I don't think that a electron can lose mass when emitting a photon since it's such a fundamental property of it.

Would be great if someone could help me out with this question! Lot of thanks in advance!

A free electron cannot emit a photon. When we say an electron emits a photon it is usually bound in an atom and it is really the entire atom that emits the photon. In order to do so the atom must be in an excited state, and yes its mass does change when the photon is emitted.

Here's an answer using some relativistic reasoning,
as well as making contact with the previously given answers.

Yes, the [invariant rest] mass (assumed nonzero) must decrease when the particle emits a photon.

This follows from the conservation of total 4-momentum, which I diagram below.
(This diagram is basically one used for the Doppler effect (think Bondi’s k-calculus).) 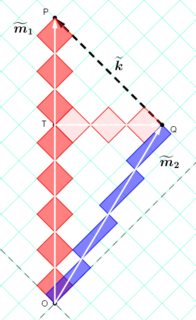 In the example diagrammed in the frame of the initial particle,

The invariant mass (which is meant when talking about the mass of a particle in physics) does not change, it is an inherent property of the particle. The "relativistic mass" does change (since the electron's kinetic energy changes).

As noted in a comment and the other answers, a free electron on its own can't simply emit a photon (since 4-momentum conservation can't be fulfilled for such a process).

Nevertheless, my statement remains true if we specify the right scenario. We assume a third body to make the conservation laws work out. This is, e.g. the case in the bremsstrahlung process, where an electron emits a photon while being redirected in the electric field of a nucleus. The energy and momentum transferred to the nucleus allows the conservation laws to be fulfilled. We don't care about the nucleus, and have a process where an incoming electron emits a photon, and continues to travel as a free electron.

Yes. For example the mass of a hydrogen atom in an excited state changes when it emits a photon and transits to a lower state.

The invariant mass of the electron does not change. However, free (isolated) electrons cannot emit photons. Emphasis on isolated. When we talk about electrons emitting photons, we usually mean a quantum mechanical system, that is, an atom, molecule or just a nucleus emitting a photon.

Can a free particle ever emit a particle?

Yes, contrary to popular belief, even nuclei (being QM systems comprised of quarks and gluons) can emit photons.

Now back to your question, whether the mass of the emitting QM system changes or not.

The answer is yes. The rest mass of the atom or molecule or nucleus (in its own rest frame) does get reduced by the amount of energy of the emitted photon (please note there are exceptions where a molecule's vibrational or rotational or translational energy is transformed into a photon).

Why? This comes from the law of conservation of energy. Now you are asking why the rest mass (of the QM system emitting the photon) decreases, and the mass energy equivalence shows you, that if the energy of the emitting QM system (atom, molecule or nucleus) decreases in its own rest frame (and it does when emitting a photon), then its rest mass has to decrease too. The electron's rest mass does not change, it is invariant.

Not the answer you're looking for? Browse other questions tagged special-relativity radiation or ask your own question.

25
Decay of massless particles
6
The Dual Cloud Chamber Paradox
9
Does the (relativistic) mass change? Why?
0
Recoil velocity and mass of particle after absorbing photon
5
When particle number can change in quantum physics?
0
Introduction to Special Relativity Question - Momentum Conservation
4
Applying the principle of equivalence to an accelerated frame
2
What is the mass of Photon or Light Particle?
2
Is the Timing of Alpha Particle Radiation Perfectly Random?