Why is total energy not constant in a graph plotting potential and kinetic energy against distance?

The context is orbital mechanics (moving objects away/toward planets, for example). The following graph confuses me: 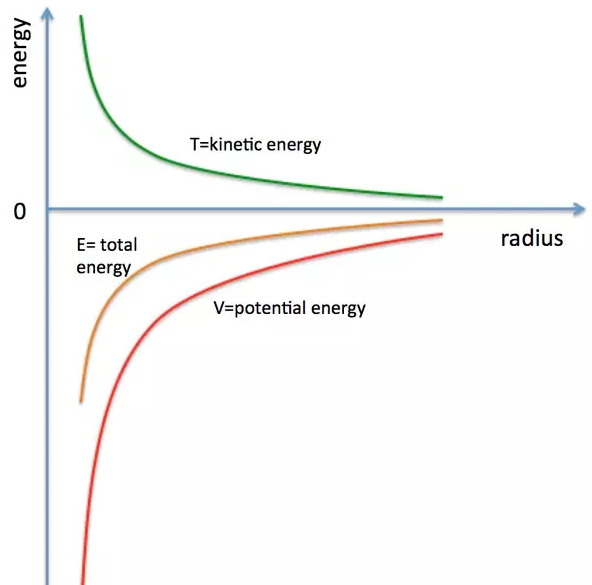 How come total energy isn't a straight, horizontal line? Due to conservation of energy? I would think that E total = E kinetic + E potential = some constant value.

I've having quite the conceptual confusion.

In class we learnt that if we move a satellite to a higher orbit, the satellite's total energy is the same (it lost kinetic energy, gained potential energy, E total unchanged).

It sounds like you misunderstood what was said in your class. Assuming circular orbits for simplicity, larger orbits have more total energy than smaller orbits.

Since the orbit is circular and no forces are acting on the satellite except gravity, the gravitational force provides the necessary centripetal force, which allows us to equate $$ \frac{mv^2}{r} = \frac{GMm}{r^2}$$ Multiplying by $\frac{r}{2}$, this implies that the kinetic energy is equal to $\frac{GMm}{2r}$. We can add this to the potential energy to obtain the total energy $$E = -\frac{GMm}{2r}$$ So we see that increasing the orbital radius causes the energy to become less negative, i.e. it increases.

This result can be generalized by the virial theorem, which says that the average kinetic energy of an object in a gravitational orbit is minus one-half of its average potential energy. This result holds for general orbits and reduces to our result for circular orbits, in which the kinetic and potential energies are actually constant.

Not the answer you're looking for? Browse other questions tagged newtonian-mechanics newtonian-gravity energy-conservation orbital-motion potential-energy or ask your own question.

3
Conservation of Momentum/Energy collision Problem
3
Elastic collision in two dimensions
1
How gravity can give energy for unlimited time?
48
Why do many people say that virtual particles do not conserve energy?
0
Kinematics contradicting conservation of energy?
0
Can a body under weightlessness detect if it's under free fall or under a zero gravity field?