Should not we apply pseudo-forces all the time as the Earth is a non-inertial frame of reference?

Clearly, the Earth is accelerating (as it has centripetal acceleration), and thus it is a non-inertial frame of reference. Then, why don't we use pseudo forces all the time? My teachers told me that the effect produced by the centripetal acceleration of the Earth on our calculations is negligible and hence we can safely neglect pseudo force. But how? I want rigorous proof with examples that show exactly how much we are compensating in exchange for neglecting that the Earth is a non-inertial frame of reference.

The way to properly answer your question is, for lack of a better word, by enumeration. Consider all the ways the Earth moves, compute the fictitious forces corresponding to them and check that they are negligible for the problem at hand. "All" is a strong word, but we can do quite well by looking at what goes into the expressions so that we can tell which ones are the most relevant.

The various motions can be all interpreted as compositions of rotations, so we can use the expression listed at the end of this Wikipedia section: the three kinds of fictitious force acting on a body of mass $m$, moving at velocity $v$, at a distance $r$ from the origin of the rotation (which happens at angular velocity $\Omega (t)$) are

I'm saying "maximum" so we have an upper bound, which is attained when the vectors appearing in the vector products are perpendicular. Now, what is left is to take the system at hand, estimate the forces, and finally see how they compare to the precision of your experiment.

The velocity is dependent on your specific experiment: for concreteness' sake, let us assume we are considering things moving at $10 \mathrm{m/s}$ at most (as much as a fast cyclist, for instance). With these numbers, let us compute accelerations instead of forces (removing the $m$, so that our considerations generalize for any mass):

So, take the experiment you want to perform, make some Fermi estimates like these, and see whether you can experimentally detect these effects! If it turns out you can, you should look at how exactly they affect your object since they are quite different: the full aforementioned expression shows how to determine their direction as well, and sometimes you might not be able to disentangle their contribution from something else. For example, if you are on the Equator the centrifugal force points radially outward, so it is equivalent to a decrease in the effective gravity at that point.

On the other hand, the Coriolis force deflects the motion of a particle, so it is easier to detect - it is the driving principle behind the Foucault pendulum. This experiment also illustrates the point that, while the accelerations are generally small, if you let them act for a long time their cumulative effect can be rather large.

This procedure (estimating the typical size of the corrections) is quite general: it can also be applied to check whether it makes sense to use Newtonian mechanics in your case, or if you should account for general relativity, quantum mechanics or some other more complicated theory.

There's two things you might mean by "centripetal acceleration of the Earth", but it turns out that you don't really need to worry about either one under most circumstances.

(Aside: the two only "more or less" cancel out because at most points on the Earth, you are actually slightly closer or slightly farther from the Sun than the center of the Earth is, and so you accelerate at a slightly smaller or larger rate than the Earth does. These small differences are the basis for understanding tidal forces.)

(Aside: this implies that the gravitational acceleration $|\vec{g}|$ actually varies from point to point on Earth's surface, since the magnitude of $\vec{a}_\text{rot}$ is larger near the equator and smaller near the poles. This effect is amplified by the oblateness of the Earth—which is itself due to the rotation of the Earth—with the result that $|\vec{g}|$ varies by about 0.03 m/s2 over various points on the Earth's surface.) 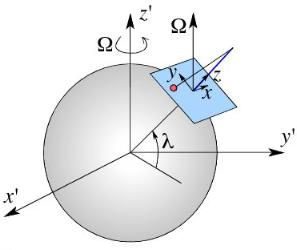 your pseudo forces are:

I don't think there is rigorous proof as these things depend more or less on the experiment, you are performing and the accuracy you needed. If you need more accurate results or it might possible that your experiment is a long time range, So you want to include these effects.

But Less talks few examples, Maybe we wanna look at gravity that is effective gravity due to centrifugal force.

Quoting Wikipedia: The surface of the Earth is rotating, so it is not an inertial frame of reference. At latitudes nearer the Equator, the outward centrifugal force produced by Earth's rotation is larger than at polar latitudes. This counteracts the Earth's gravity to a small degree – up to a maximum of $0.3$ % at the Equator – and reduces the apparent downward acceleration of falling objects.

One more example can be the Coriolis force. You can look for my answer which does the calculation (it's too approximate but convey the thought).

Does the Coriolis force act on all objects?

For more accurate calculation look for Exercise 9.9 Train on Track in Introduction to Mechanics by Klepner.

A 400-ton train runs south at a speed of 60 mi/h at a latitude of 60◦ north. What's the magnitude of horizontal force?

Not the answer you're looking for? Browse other questions tagged newtonian-mechanics forces reference-frames acceleration or ask your own question.

0
Why Earth is taken as Inertial Frame?
16
Did relativity make Newtonian mechanics obsolete?
7
Does the Coriolis force act on all objects?
2
Does Acceleration due to Gravity take into consideration the centrifugal acceleration due to Earth's spin?