What at "constant state variable" mean in thermodynamics?

For example suppose we heat a gas inside a container at external pressure of $1$ atm. The differential of th enthalpy is:

and for finite changes:

From the second equation because $VΔp=0$ (no matter if the pressure were homogeneous inside the container at all times) and by using first law of thermodynamics $ΔH=Q$. So the heat is the same no matter if the process is quasi-static or not because what matters is the final and initial state. Lets say we have also measured the temperature difference between these two states. Then $C_p=\frac{ΔH}{ΔΤ}$.

But this can't be correct because as we know heat capacity at constant $p$ is defined as:

To sum it up my question is what at "at constant state variable X" means in thermodynamics.

Does this imply that we should calculate such quantities only at quasi-statically processes?

For example (see FIG 1), let's say we have a constant quasi-static (reversible) external pressure expansion process between states 1 and 2. Clearly, $\Delta P=0$. But we could also connect the same two states by first conducting a reversible isothermal expansion from state 1 to the final volume and lower pressure (state 1a of FIG 1) and follow this with a reversible constant volume (isochoric) heat addition to increase the pressure to the original pressure (state 2). In this example $\Delta p=0$ but the path was not a constant pressure path.

There are, for that matter, an infinite number of possible paths connecting states 1 and 2. For every such path, $\Delta p=0$.

To sum it up my question is what at "at constant state variable X" means in thermodynamics.

Without seeing the statement in context, it seems to mean a property (pressure, temperature, pressure, internal energy, enthalpy) of the system that does not change during a process. But as I already stated, a property during a process between two equilibrium states does not necessarily have to be constant for that property to be the same for the two states. 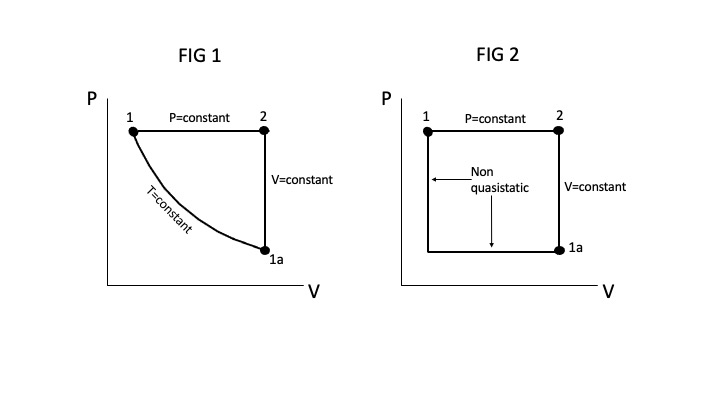