To make up a concrete situation consider a horseshoe magnet and a charge moving between the poles. 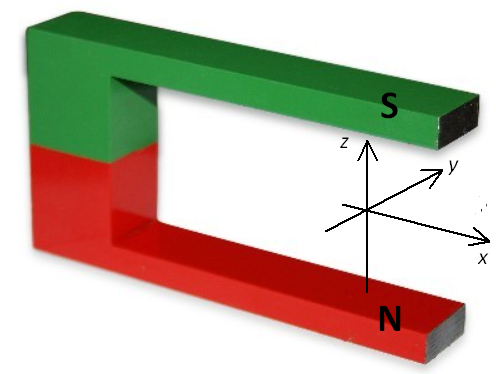 Note that, until now we didn't yet make any statement about how to define the direction of the magnetic field $\vec{B}$.

So my question is: why don’t we just define our magnetic field to be the vector field that is the direction (and magnitude) of the magnetic force that a particle experiences at a given location?

Looking at the results above, there is just no way to do this. You can't come up with a magnetic field vector $\vec{B}$ consistently having the same direction as the force $\vec{F}$.

Because the force experienced by the particle isn't just dependent on its location, either in magnitude or direction.

The force depends on the particle location and it is perpendicular to its velocity. Thus if you change the velocity direction, the direction of the force changes. But if you want the magnetic field to be defined only as a function of position, then it must have a fixed direction at any point and cannot change just because the particle velocity has changed.

To put it another way, your magnetic force field could not be defined in the way you propose because it would be multiple-valued - at any position particles can have different velocities and therefore experience different forces.

The proper way to define a changing force vector that is always perpendicular to the velocity is then in terms of the vector product of velocity with another fixed vector - the magnetic field.

The magnetic field at a point is supposed to enable you to determine the force on a unit moving charge at THAT point.

By defining it the way it has been defined, it is easier to determine the direction of magnetic force on any charged particle moving in any vector

You see, the magnetic field 'decides' on how to push the particle based on how it enters and what charge it has. Let's fix the charge to be $1C$, so we can write the expression of force as:

Now, let's say that we 'rotate' our coordinate basis vectors such that the $ \vec{B}$ is pointed along one our axes like say $\hat{k}$ theN:

Ultimately, the cross product is perfect because it easily always to say what we see in real life the easiest which is that the force experienced by a particle depends on what direction it was moving.

Not the answer you're looking for? Browse other questions tagged electromagnetism forces magnetic-fields definition vector-fields or ask your own question.