Is there a motion picture of sub-atomic particle collisions?

We're all familiar with these pictures describing the collision between two sub-atomic particles. 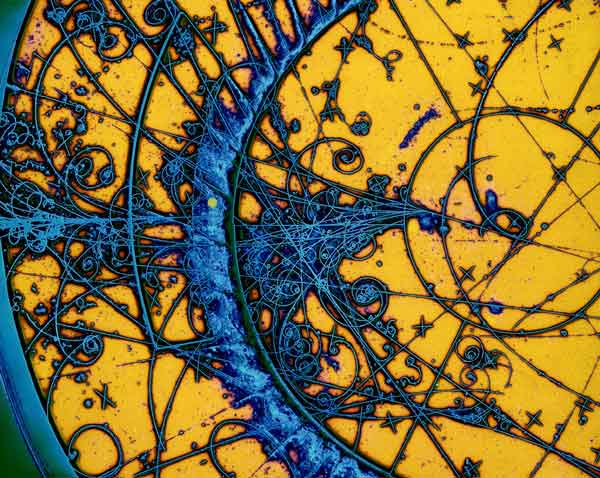 I was thinking about Richard Feynman's description of an anti-proton as a proton that's simply moving backward in time. I believe he said that mathematically, is was perfectly correct to think of a reaction this way. That got me to thinking about these pictures. How are they achieved? I understand in the old days, it was an oil drum or something to that effect, but it was basically a static picture (that is, no assumption about the order of the events could be deduced from the traces).

The reason I ask this is: if the technology is such that a series of pictures could be taken that would show the motion before and after the collision, then you could answer Feynman's hypothesis. If you saw the trace of an anti-proton appear before the collisions, then you would have proof that Fenman was correct: anti-protons are just protons going backward in time. If, on the other hand, there was nothing on the image until the collision, and you saw two distinct particles leaving - a proton and an anti-proton - then we have two distinct particles that can only be interpreted as moving forward in time.

Does that make sense? Is a sequence of pictures of the same collision possible, or is the technology such that we can only achieve these single snapshots of an event?

Any background information about how, for example, in the Large Hadron Collider, these images are taken, would be helpful to understand what we can and can't conclude from these diagrams.

In your question you have a photograph of tracks in some kind of bubble chamber. This is an old technology, in which some kind of fluid is prepared in a supercritical chemical state, on the wrong side of a phase change. (In a "cloud chamber" the fluid is ready to condense liquid from vapor; in a "bubble chamber" the fluid is ready to boil.) When energetic charged particles pass through such a chamber, they create ions along their path of travel (hence the name "ionizing radiation"). Each ion serves as a nucleation site for the supercritical phase change, so the ionizing radiation leaves a trail of droplets or bubbles which are visible to the naked eye. So the procedure for using a bubble chamber is something like

On the time scale of a chemical phase change, the motion of any relativistic particle across a fluid-detector volume is instantaneous. You do get motion in a bubble chamber: the bubbles move. (In a cloud chamber, the droplets fall.)

The chemistry part of this is slow, and messy, and expensive. Physicists don't like using chemistry for detectors. We like to use electronics.

In a modern gas ionization detector, we don't detect the ionization by waiting around for a chemical change. Instead we fill the volume with wires, run the chamber at high voltage, and the ions fall into our data acquisition system. If the wires are arranged in planes mostly perpendicular to the direction of the incident radiation beam, and the wires in one plane are mostly perpendicular to the wires in adjacent planes, then we can reconstruct a ton of information in both space and time. Perhaps one event has the most charge collected on wire 42 of plane A, on wire 86 of plane B, on wire 167 of plane C, and on wire 230 of plane D; this is already a track, and there are clever tricks you can use to get a position resolution that's much finer than the size of the gaps in the detector.

(You can also collect the ionization released with your radiation passes through a semiconductor, like silicon or diamond. These detectors are smaller and so have better position sensitivity; they are faster and so have better time sensitivity. They don't last as long in a high-radiation environment, though, and replacing the silicon in a wafer is more invasive than purging the gas in a wire chamber.)

The Wikipedia page on time projection chambers, which is one of several ways to get timing information from a wire chamber, is exactly as not-helpful as the first ten hours of seminars I sat through on the topic — it's a niche subject. But the short story is that, in a modern particle detector, timing information is absolutely part of track reconstruction. And in answer to your title question, I think probably 60% of physics graduate students who get a pile of position-and-time tracking data will make an animation of it. I've seen a dozen such animations (and made two), but only one (not mine) actually solved a problem and showed up in talks and theses.

In response to your extended question: the detritus of a collision always starts at the site of the collision and travels outwards, forwards in time. In collisions which produce antiparticles, it is not the case that the antiparticle detritus appears before the collision and travels towards it. Among other problems, having the detritus reach the collision at the right instant is an impossibly low-entropy requirement; you'd have better luck unscrambling an egg. Feynman's comment is a low-jargon way to claim CPT symmetry. The transformation CP reverses a particle's charge and parity, which makes it mathematically identical to an antiparticle; the transformation $T$ changes the signs of all the time intervals. It is a deep and important result that CPT symmetry is closely related to the way spacetime transforms in special relativity.

here is found in the list a "picture" of an antiproton:

The dark lines in this picture are produced by charged particles as they force their way through liquid deuterium.

In the top left corner of the picture, this antiproton annihilates with a proton , producing a 6-pronged annihilation 'star’.

We know it is an antiproton because of the energy (can be measured by the curvature and/or length of tracks) , we know it was an antilamda decaying because the mass is the mass of the lamda (the invariant mass of the two four vectors) and the charge of the track that gives the star is negative (from the direction of the magnetic field and all those little electrons turning in it). It is the motion recorded on film of an antiproton.

In addition my statements above are describing strict kinematical mathematics it is strict mathematics fitted on the tracks, that is consistent with the motion. Also the "hypothesis" that the antiproton materializes where the stars of pions are, violates entropy (order out of disorder) and the antiparticle time direction hypothesis, as some of the pions are not antiparticles . (let alone that they should not exist, as pions are made up of particle-antiparticle quark pairs and should be sitting dots).

Further, there have been electron positron colliders and proton antiproton colliders over kilometers of periphery turning accurately calculated in magnetic fields, following the causality path of time. The machines would not work to the great accuracy they have for the hundreds of thousands of antiprotons in the beam generated upstream by other accelerators.

That one in the Feynman diagrams can mathematically go forward and backward the time axis redefining if it is a particle or antiparticle, has the only correlation to measurements in the crossection calculation.

All the thousands of data of particle physics are fitted mathematically with the mathematical standard model hypothesis, (LHC data too) and if your hypothesis held it would be impossible to fit them .

Any background information about how, for example, in the Large Hadron Collider, these images are taken, would be helpful to understand what we can and can't conclude from these diagrams.

Many things could be deduced from such particle chamber. I've repainted main directions here : 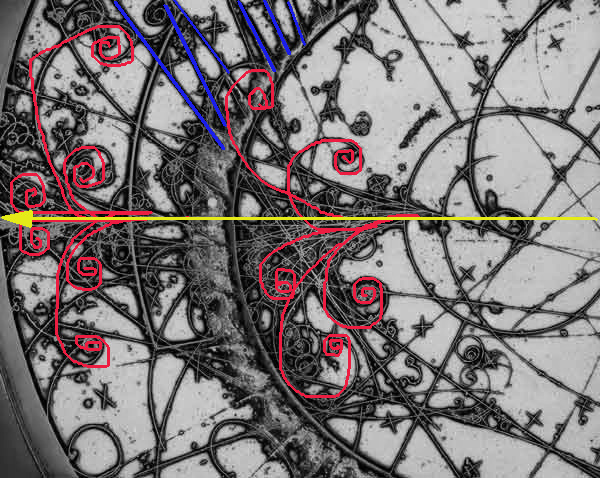 Given, that main test particle enters chamber from outside world and moves across chamber leaving various traces, I've painted probable particle path in yellow. The other red traces - is recoil movement of other collided particles with a test particle. From the curvature radius of traces, one can deduce particle tangential and angular velocities, etc. Turbulence-like movement paths shows that probably particles are under the influence of external magnetic and/or electric field, cause particles can't change straight movement along the line with no apparent reason. Given that, particles which descended along blue lines has no electric charge (like neutron, neutrino, etc) cause they don't reacts to applied external field and just moves straightly along the line out of impact area. From a scattering angle one can find-out a particle mass. Blue lines are more or less co-linear, so we can make a conclusion that particles going in a blue trajectories has same mass and no charge (as concluded before), so there is a big chance that they are of same type.

Not the answer you're looking for? Browse other questions tagged particle-physics time collision feynman-diagrams antimatter or ask your own question.

3
What barriers exist to prevent us from turning a baryon into a anti-baryon?
13
Anti-matter as matter going backwards in time? (requesting further clarification upon a previous post)
8
Can photons have negative energy?
1
Collision symmetry and measuring the asymmetry in the Drell-Yan process
1
Where all those particles come from - proton proton collision
0
Why the total momentum and kinetic energy of a subatomic particle in a head-on collision is transferred to another particle?
0
Can Anti-Particle like Anti-Proton give advantage in ADS (Accelerator Driven System) for Neutralizing Nuclear Waste?