What is the bare minimum of air density you need to fly a helicopter?

How high will a helicopter be able to fly before the propellers have not enough air particles to achieve lift?

What is the minimum air density needed to achieve flight with a helicopter?

Could you give me the air density from 100% to 1% in meters? Only when there is a significant decrease, otherwise it might be too much work.

Which air density is needed for each of them to fly? At what altitude would there be not enough air particles to achieve lift and what would the air density be?

Thanks in advance to the brilliant minds that read and answer my questions.

The minimum air density will depend on the weight and aerodynamic design of a given helicopter.

Perhaps the easiest way to get at this is to consider how high a typical helicopter can fly, and how air density typically varies with altitude.

For the first part, see How High up Can a Helicopter Fly? Lots of information here. Extremes: With years of preparation, a helicopter has landed on the summit of Mt. Everest. The altitude record was set in a harrowing flight to 40820 ft.

TLDR – Helicopters with turbine engines can reach altitudes of 25,000 feet during forward flight. However, helicopters cannot fly as high when hovering. The typical maximum height for a hovering helicopter is about 12,000.

As altitude increases, air pressure drops, which makes air density lower. On the other hand, temperature also drops, which means the density doesn't drop as much as it would if temperature was constant. It varies with weather and latitude.

For typical conditions, here is a chart from Wikipedia's Density of air 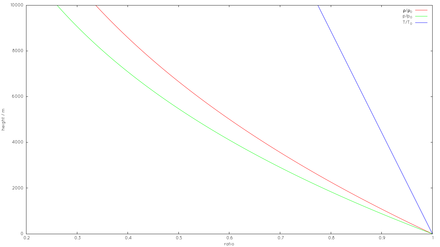 Here is a Density Altitude Calculator, if you want more precise answers. You will need temperature.

Veritasium has video all about it.

By contrast, most drones are consumer toys. They are limited by the FAA to $400$ feet. There isn't much point to making them capable of altitude.

However, maximum climb altitude of a drone considers the question in detail. Air density is important, but energy stored in the battery is also a limitation.

Not the answer you're looking for? Browse other questions tagged atmospheric-science drag aerodynamics aircraft lift or ask your own question.

4
Why ballasted gliders fly faster?
20
Why can't supersonic planes "just fly higher" to go faster while maintaining cost?
6
Levitating capacitor
3
How does quadcopter's battery capacity relate to it's maximum flight time?
5
Do helicopters and planes fly by different reasons?
6
Yet another airplane question