How is momentum conserved in the case of a ballistic pendulum collision?

To my knowledge, momentum is conserved when net external force equals zero.

In the case of a block $m_1$ attached to a string hitting another block $m_2$, there must be a net force on $m_1$, which would be its centripetal force, pointing inward. Therefore comparing just before $m_1$ hits $m_2$ and just after $m_1$ hits $m_2$, momentum cannot be conserved since net external force exists.

However the answer to this homework problem in my book states that momentum is still conserved.

How is this so? 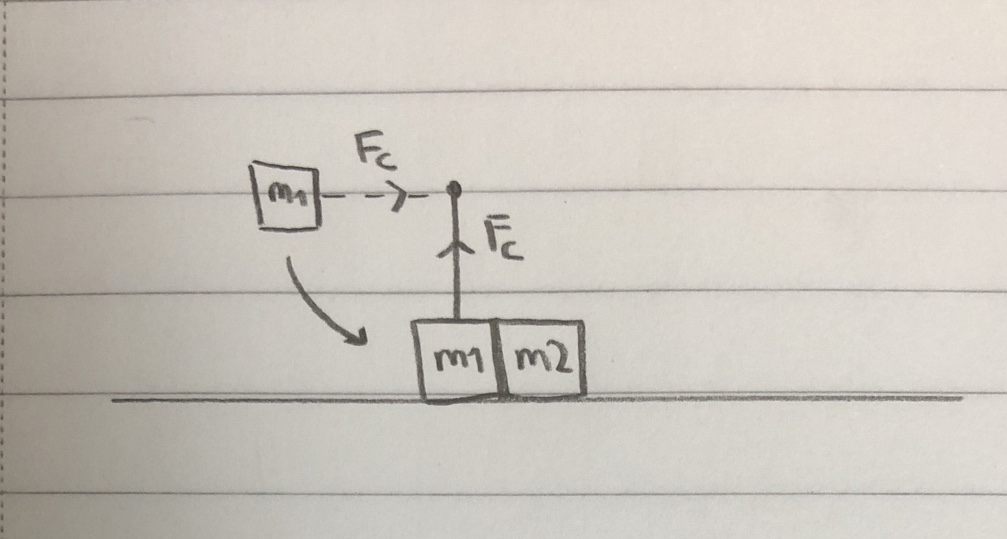 At the moment when $m_1$ collides with $m_2$, net force along X-axis is $0$ so, momentum is conserved in that direction. But momentum is not conserved along Y-axis.

You are right to be concerned. A better demonstration of momentum conservation would have been if the blocks had been sitting on perfectly frictionless ice, or even better: in space. The reason they chose this example because it shows how the famous Newton's cradle works. If you've ever seen a Newton's cradle in real life you know that after a while the balls slow down and come to rest. Especially the smaller ones. So obviously momentum is not totally conserved. But enough of it is conserved that it's still a nice experiment.

The reason the momentum is conserved is that the duration of the collision is very short. In this question I found and estimate that says the collision between two steel balls would last less than a millisecond. In a collision the force is very high but the timespan very short. The contributions of other forces can be approximated by $\Delta \vec p\approx\vec F\Delta t$. So as $\Delta t$ gets small the other contribution vanish.

So to conclude, don't worry that momentum isn't entirely conserved. The actual effect is small and you can still make predictions using momentum conservation. For example if you lift 3 out 5 balls in a Newton's cradle you can predict that 3 will bounce off which is still a nice result (in my opionion).

As a final note I should add that this experiment relies not only on momentum conservation but also on energy conservation. In a closed system momentum is always conserved but energy can still be dissipated as heat/sound etc. If a collision loses all of its energy (imagine throwing two blobs of clay into eachother in space) the two parts will stick to eachother. In a Newton's cradle you can recognise this when the balls start swinging together because the collisions aren't perfectly elastic (=energy conserving).

So yes, we can apply the conservation of linear momentum in this problem but only along the x-axis.