How does an accelerating mass on a ring interact with the ring?

In outer space, imagine a mass $m$ on a ring with mass $M$. The small mass is given a velocity $v$ after which it moves without friction on the ring. Initially, the velocity of the center of mass (COM) of the ring is zero.

If the small mass moves along the ring, it exerts a force on the ring. This centrifugal force is directed radially outward. The ring in its turn exerts a centripetal force on the small mass. The ring starts to move because of the centrifugal force imparted on it. Because no other forces are acting on the system mass-ring, the total momentum of the system is constant.

@kb314 made a clear comment. When the mass is accelerated from zero to its final velocity, the reaction force of the ring contains a tangential component (it has to, due to conservation of energy(?)) which decelerates the mass. Equilibrium hasn't been reached yet. I can't see though how this tangential force is imparted on the mass. There is no friction, so...
It seems clear that you can't give the mass an instantaneous increase in speed (from zero to the final value). In the mind one can, but not in practice. In practice, the mass is given a pulsed acceleration. So, what's happening?

It can be explained because it's momentum in a specific direction that we should consider:

"Now, because the ring will gain momentum due to the centrifugal force, this means that the velocity of the moving mass must decrease, in order to keep the total momentum constant. But how can the velocity of the mass decrease if the force on it (the centripetal force, given to it by the ring) is perpendicular to its velocity?"

It's true that the force up the page doesn't change the left/right component of velocity, but the component in the up/down direction can change.

More detail on this below:

If we draw a circle for the ring on paper, centre O, with the bead’s starting point at the bottom B, OB is down. Then the bead goes clockwise $45^\circ$ around the ring to a point A.

So to find the beads velocity relative to the observer (A3), we adapt A2, now starting at A, but adding components due to the rings motion, so now (for example) 1cm extra left and 1cm extra down, making A3, 3cm left and 1cm up.

We can now see that A1 is no longer perpendicular to A3 and could slow down the bead, even though the force acts towards O.

(a diagram of this is here) 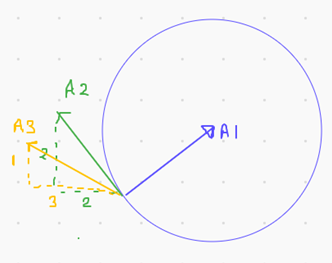 When we reach a stationary state, with the mass $m$ moving with a speed $v$ along the ring, it is true that the pair of forces on the contact mass and ring are radial.

But in the initial condition, that is for $t=0$, when mass $m$ starts to move tangentially, the contact force is zero. There is no centrifugal or centripetal force.

This answer is arrived at as a summary of the discussion in the comments to the answer by @JohnHunter.

Please see this schematic which shows a (different) mechanism where a frictionless bead rotates on a ring which is horizontal to the ground. The schematic contains the free body diagram (FBD) of forces acting on the bead at the time instant at which a jet (such as a miniscule firecracker quality rocket) applies an impulse force on the bead. The resulting reaction force (recall that the phenomenon is devoid of friction) acted by the ring on the bead is clearly not radial since the reaction to the impulse will cause a non-radial reaction component besides the instantaneous centripetal force component. The situation considered is the converse of the situation in the OP which was analyzed in a similar fashion in the answer by @JohnHunter.

This post elicits a great example illustrating the fact that directions of contact reaction forces may not always be perpendicular to the perceived tangent to the surface. Such an assumption therefore needs to be treated with caution.

Not the answer you're looking for? Browse other questions tagged newtonian-mechanics conservation-laws inertial-frames or ask your own question.