I simply want to know why, in an n-type semiconductor, we have this "new" kind of energy level called the "donor level", apart from the valence and conduction and band, and , more importantly, why is the donor level near the top of the band gap?

My (possibly arm-wavy) qualitative explanation is that the donor electrons are "free" , so you would naturally expect them to be in a higher energy level than the valence electrons...

Since small energy gaps are generally associated with large dielectric constants, it is almost always the case that the binding energy of an electron to a donor impurity is small compared with the energy gap of the semiconductor. Since this binding energy is measured relative to the energy of the conduction band levels from which the bound impurity level is formed, we conclude that donor impurities introduce additional electronic levels

A similar argument can be applied to acceptor impurities, whose valence is one less than that of the host atoms (e.g., gallium in germanium). Such an impurity can be represented by the superimposition of a fixed charge - e on top of a host atom, along with the presence of one less electron in the crystal. The missing electron can be represented as a bound hole, attracted by the excess negative charge representing the impurity, with a binding energy that is again small on the scale of the energy gap,$$E_g$$ In terms of the electron picture this bound hole will be manifested as an additional electronic level at an energy $$\epsilon_a$$ lying slightly above the top of the valence band. The hole is bound when the level is empty. The binding energy of the bole is just the energy $$\epsilon_a - \epsilon_v$$ necessary to excite an electron from the top of the valence band into the acceptor level, thereby filling the hole in the vicinity of the acceptor and creating a free bole in the valence band. 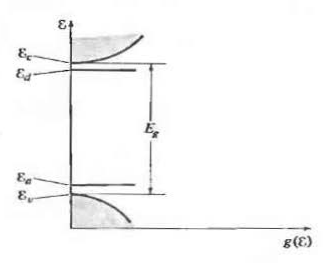 One approach is to consider the translation from a single covalent bond to a bulk semiconductor with multiple covalent bonds. The picture below shows the energy diagram.

Translate this single bond picture to the band structure. The HOMOs in Si become the valence band (VB) and the LUMOs become the conduction band (CB). The image shown has the case for one p-type or one n-type dopant.

Not the answer you're looking for? Browse other questions tagged solid-state-physics semiconductor-physics or ask your own question.

1
Doped semiconductors
2
Determining if a semiconductor is n-type, p-type or intrinsic
0
Understanding Wikipedia's “Semiconductor Band Structure” diagram where the bandgap appears to increase with increasing density of states
0
Can electrons move back into the donor level
1
Can the Fermi level go above the conduction band energy if doped heavily enough?
0
Some questions regarding n and p type semiconductor
0
Does doping affect the number of band states?