Can flat spacetime have curvature?

Hi I am new and I hope this can make sense. Is it true that flat spacetime can curve? For example, you have a flat piece of spacetime that curves at a constant rate of pi/2. the flat spacetime would therefore curve into a sphere. From my understanding this would mean it is flat 3-dimensionally, but a 4-dimensional sphere. This would ideally make a simple solution, because the radius (z-axis) would be constant while maintaining a flat coordinate system.

If this is a potential solution, what other attributes would such a structure have? What would be the assigned variables in Einstein's Field Equation for such a solution?

It might be helpful for you to read up on Riemannian and flat manifolds.

But, yes, it is possible for some flat N-D flat manifold to appear curved in some (N+1)-D hyperspace.

At least, that's my recollection. I'll go through my old notes soon and edit this comment as / if appropriate.

There a difference between intrinsic and extrinsic geometry. You might find this question on the mathematics stack exchange helpful.

Consider a flat sheet bent around to form the curved edge of a cylinder. That sheet is intrinsically flat and extrinsically curved. Any entity "living" on that sheet still obeys Euclidian geometry.

I do not think it's possible to have a flat N-D sheet form a sphere in some (N+1)-D embedding space, however.

EDIT 2: One way of testing whether a manifold is intrinsically curved is by parallel transporting a tangent vector around a closed geodesic on that manifold. 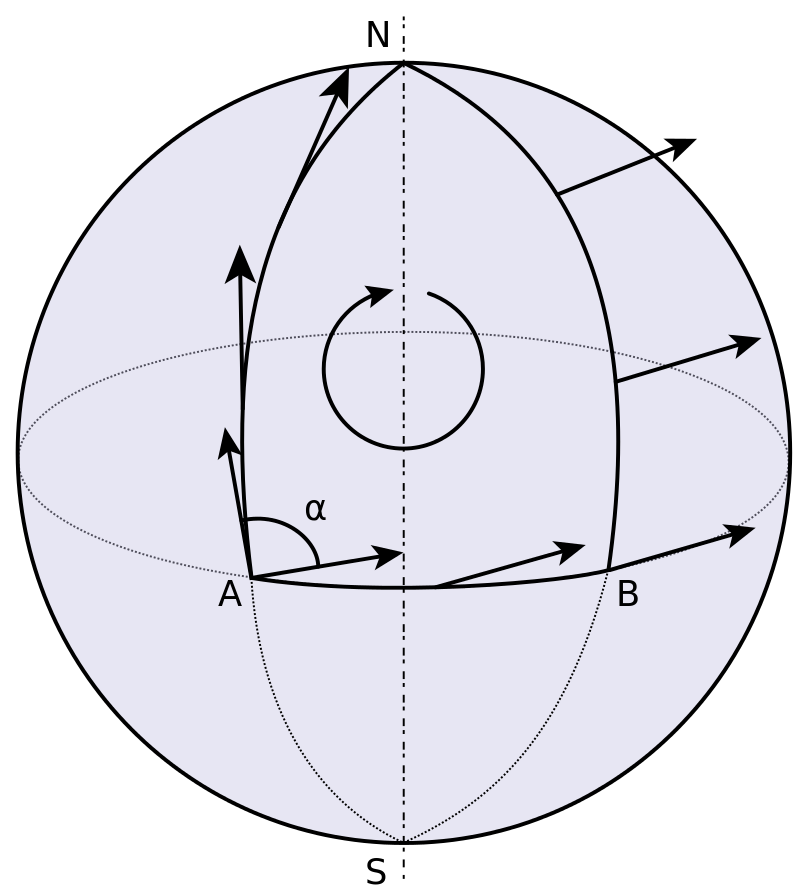 Since the vector has been altered after this transport, the manifold is intrinsically curved. Performing this on the curved edge of a cylinder, you'd find the vector unchanged, thus the curvature is only extrinsic.

The trick is the difference between intrinsic and extrinsic curvature.

Intrinsically curved spacetimes are curved relative to their own coordinate system. On intrinsically curved space(times), Euclid's laws, in particular, the parallel postulate, are not valid, and the geometry is necessarily different. Mathematically, there is an object called the Riemann tensor that (in one interpretation) measures what happens when you parallel transport a vector around a closed loop in every possible direction, and says "hey, you're not necessarily brought back to yourself!"${}^{1}$. There are many ways of detecting intrinsic curvature, but this is a first idea. Note that, contrary to your intuition, the 2-d sphere is intrinsically curved, and not flat, as shown in the footnote.

Then, you have extrinsic curvature. This describes how something curves in some enveloping space. Imagine a sheet of paper. You can curve this sheet into a cylinder without distorting it. An ant living on the sheet of paper would not and could not know if it was a flat paper or a cylinder without "going around the world" or looking out into the third dimension somehow. A cylinder is not intrinsically curved. Its curvature depends solely on the way in which it is fit into 3-dimensional space. There are several ways that we can detect this, but the simplest is to "look to see if the normal vector to the embedded space moves around relative to the bigger enveloping space". But note that this definition directly appeals to the enveloping space. You can even construct examples where a given 2-d space will have extrinsic curvature relative to some enveloping spaces, but not others.

${}^{1}$ If you are skeptical of this talk, imagine an arrow sitting at the equator in Africa pointing directly north. Take this arrow along a meridian , not changing its heading, until it hits the north pole. Now, take it back down to the equator, this time, hitting south america somewhere. Now, parallel transport it back to its original position in Africa. It's no longer pointing due north, right? This is because the globe is intrinsically curved.

Not the answer you're looking for? Browse other questions tagged general-relativity spacetime differential-geometry metric-tensor curvature or ask your own question.

1
Confusion regarding geodesic of thrown ball - curved or Cartesian coordinates?
12
How much choice did Einstein have in choosing his GR equations?
21
Physical meaning of non-trivial solutions of vacuum Einstein's field equations
5
Extent of coordinate freedom to set metric components along a spacetime path
2
Relation between curvature and metric determinant
1
Confusion re: geodesics, connections, and straightness
1
Can a gravitational field in the near vicinity of a massive object be thought of as a local extension of spacetime?
2
How to select which differentiable manifold to use to model spacetime?