Does a pendulum move slower at the bottom of its swing compared to a free-falling body dropped from the same height? (due to rotational energy)

My tentative understanding from two previous stackexchange posts listed at the end of this post (one my own) is that an object being swung in a circle with a rope possesses an internal rotational energy about its center of mass. However I don't feel totally confident in my conclusion because this perspective is new to me, and I want to ask a follow-up question about a pendulum (which was not addressed in the previous stackexchange posts) to check my understanding.

not totally exact for any real pendulum? It seems to me that some of the initial gravitational potential energy contributes to the internal rotational energy component at the expense of the translational energy component. Only at the top of the pendulum's swing, when the angular rotation direction changes direction does the angular rotational energy equal zero. Thus at the bottom of the swing, when the pendulum is moving the fastest, its translational speed will be less than that of a free-falling body dropped from the same height.

It is surprising to me that I haven't seen this point mentioned in texts that I've read, especially since the texts mention the small-angle approximation for the derivation of the equation of motion. I think that I see that this internal rotational energy term can be neglected under conditions of very long pendulum arm length. My purpose in asking this question is not to do a gotcha of the textbooks, as I realize that physics frequently makes use of limiting cases. I am just trying to better understand rotational motion, which my previous question had also addressed.

Along the same line of reasoning, would the full energy analysis of other common systems like a frictionless rollercoaster or brachistochrone also require a rotational energy term?

See Does angular momentum exist around the moving center of mass of a released swinging rigid body?

and this stackexchange question

Rotational Kinetic Energy of a Pendulum

The most general case is that of a solid rigid body attached to the end of the pendulum. The initial potential energy is converted into kinetic energy at the bottom of the swing. 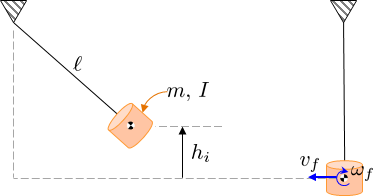 The solid object has not only mass $m$ but mass moment of inertia $I$ about the center of mass.

The way to think about it is in terms of energy. If there is a rotational energy component $\tfrac{1}{2} I \omega^2$ included then the translational kinetic energy is going to be less than the potential energy.

1
Does angular momentum exist around the moving center of mass of a released swinging rigid body?
1
Rotational Kinetic Energy of a Pendulum

6
Foucault pendulum initial velocity
1
Rotational Kinetic Energy of a Pendulum
0
Does a force does more work on an extended body?
3
Inverted pendulum on a cart - Lagrangian without moment of inertia?
0
Non-conservation of angular momentum example but is an external torque really required?
2
When do we only consider an object's rotational kinetic energy?
1
Confusion regarding translational and rotational kinetic energy
6
A bowling ball on an infinitely long track
0
Conservation of mechanical energy applied on rolling