How can Ohm's law be correct if superconductors have 0 resistivity?

However superconductors cause the resistance of a material to go to zero, and as I understand it, as $R \to 0$, $I \to \infty$. Does this present a problem for Ohm's law?

Ohm's law is generally NOT correct, it's called a law for historical reasons only!! It's a law in the same sense in which Hooke's law is a law... it holds only for certain systems under certain conditions, but it's widely known because it's simple and linear!

It's not just superconductors, diodes are a neat everyday example of Ohm's law failing to hold. But it fails for every material under sufficiently extreme circumstances.

Check out this I-V graph for a diode. 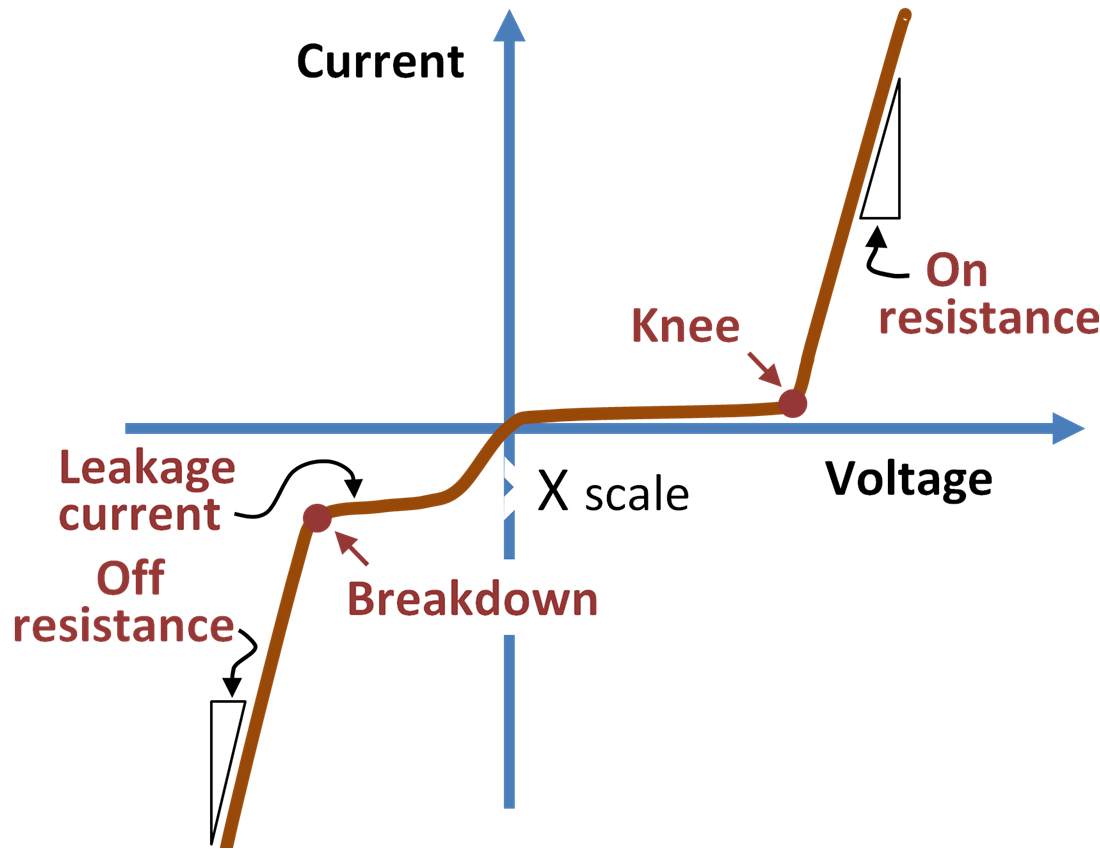 Ohm's law works for ordinary conductors for a reason: the particles carrying the current (usually, but not always electrons) scatter incoherently and inelastically from features of the conductor. In the case of an electron current, at low temperature this scattering is caused by impurities in the conductor; at high temperatures, the dominant source of scattering is electron-phonon scattering (phonons are coherent vibrations of the conductors fundamental lattice). As long as those conditions pertain, you can expect Ohm's law to be a good approximation to the behavior of the current.

However, in a superconductor quantum mechanics rears its elegant head and generates a situation in which coherent effect dominate to a point where is effectively no inelastic scattering and as such no energy loss in the flow of current.

Nor are these the only possible situations, as Schlomo Steinbergerstein notes semiconductors exhibit a wide range of conduction behaviors.

This business where regimes dominated by coherent and incoherent interaction show very different behavior comes up a lot in various corners of physics and one could spend a long (and possibly enjoyable) time surveying those effects alone.

Looking at your question from the perspective of ideal circuit theory, an ideal resistor has the following I-V relationship:

In ideal circuit theory, an ideal conductor can be thought of as a "zero ohm resistor". Setting $R = 0$ in the above equation gives:

In other words, for any value of current, the voltage across an ideal conductor is exactly $0V$.

Of course, in the real world, there are no ideal resistors or conductors. However, Ohm's Law is still a good approximation for many materials over some limited operating range.

Ohm's Law does not have a problem here any more than any other formula in the sciences which involves dividing by a denominator which can go to zero.

Ohm's Law exhibits a singularity when there is no resistance, but a nonzero voltage. An ideal voltage source cannot be connected in parallel with a zero resistance, because that implies that infinite current flows, which is absurd.

Note that superconductivity doesn't eliminate impedance. Even if you had an ideal voltage source to connect across a piece of superconductor, the current would not be infinite. It would be limited by inductance (which would allow the current to gradually rise without bound). To properly model the circuit, it would have to be drawn as an ideal voltage source connected to an ideal inductor. Such a thing is mathematically possible and analyzable (and in fact probably occurs in numerous elementary textbooks as an example).

Ohm's Law is an idealization based on ideal resistance, which has no parasitic inductance or capacitance. As such, it breaks down long before we reach zero resistance. So the singularity at R=0 is purely academic. At R=0, we have a piece of wire which may be superconductive, but it exhibits capacitance and inductance.

Note, by the way, that in superconductors, current can flow without voltage. But this fits in with all ordinary laws that we apply in analyzing simple circuits. If draw the schematic of a ciruit which consists of a loop of ideal wire, then some finite current can flow in that loop forever without any potential differences anywhere in that loop. We can divide the loop in half, and each half can "think" that there is a current source in the other half.

No, because the voltage drop across the device also goes to zero.

2
How does Ohm's law apply to superconductors?
1
Given Ohm's law, how can current increase if voltage increases, given fixed resistance?
0
Ohm's law and an ideal voltmeter
0
Ohm's Law Complications
9
Does Ohm's law $V = IR$ mean voltage causes current, or does it just say that voltage and current are related?
1
What exactly does Ohm's law say?
7
What are the dependent and independent variables in Ohm's law?