Let's say that we have a cold dark matter theory, so we imagine weakly interacting particles. Now, let's say that one of those dark-matter particles has a rare interaction while traveling through the Earth's mantle. Let's also imagine that this interaction causes the particle to lose most of its energy in Earth's reference frame (also rare, but nonetheless realistic), such that it's not energetically possible for it to rise above the surface. Since interactions are fairly improbable it also can't stop moving. Is it then correct to imagine that it will "orbit" within the center of the Earth for a while?

If we put the Earth's center at the origin and assume constant density, as I understand, the field should be:

I've read from several sources about the consequences of gravity being $1/r^p$ with $p \ne 2$, that is, not inverse-square. What would happen in this case where $p=-1$? Will the orbit be periodic? Or will its trajectory over time just be a big knot?

What you're looking for is Bertrand's theorem which states that for central force field in $1/r^p$, only $p=2$ (newtonian field) and $p=-1$ (harmonic field) give closed orbit whatever the initial conditions are (and assuming you are bounded to the field).

For sure you can find some initial conditions that give closed orbits (for example, all $p\in[-1;2]$ will give you closed circular orbits if you have the right initial velocity in norm and direction), but $p=2$ and $p=-1$ are the only one that works for all initial conditions. In these cases, booth curves are ellipses but in case $p=2$, the center of force is located at one of the focal points of the ellipse whereas for $p=-1$, it is located at the center of the ellipse.

Just to show what would happen outside those two special cases, here is an orbit computed for a $1/r$ field ($p=1$) which is the one experienced while travelling around a spiral galaxy (and responsible for the so called galaxy rotation curves). In that case, there is no closed orbit. 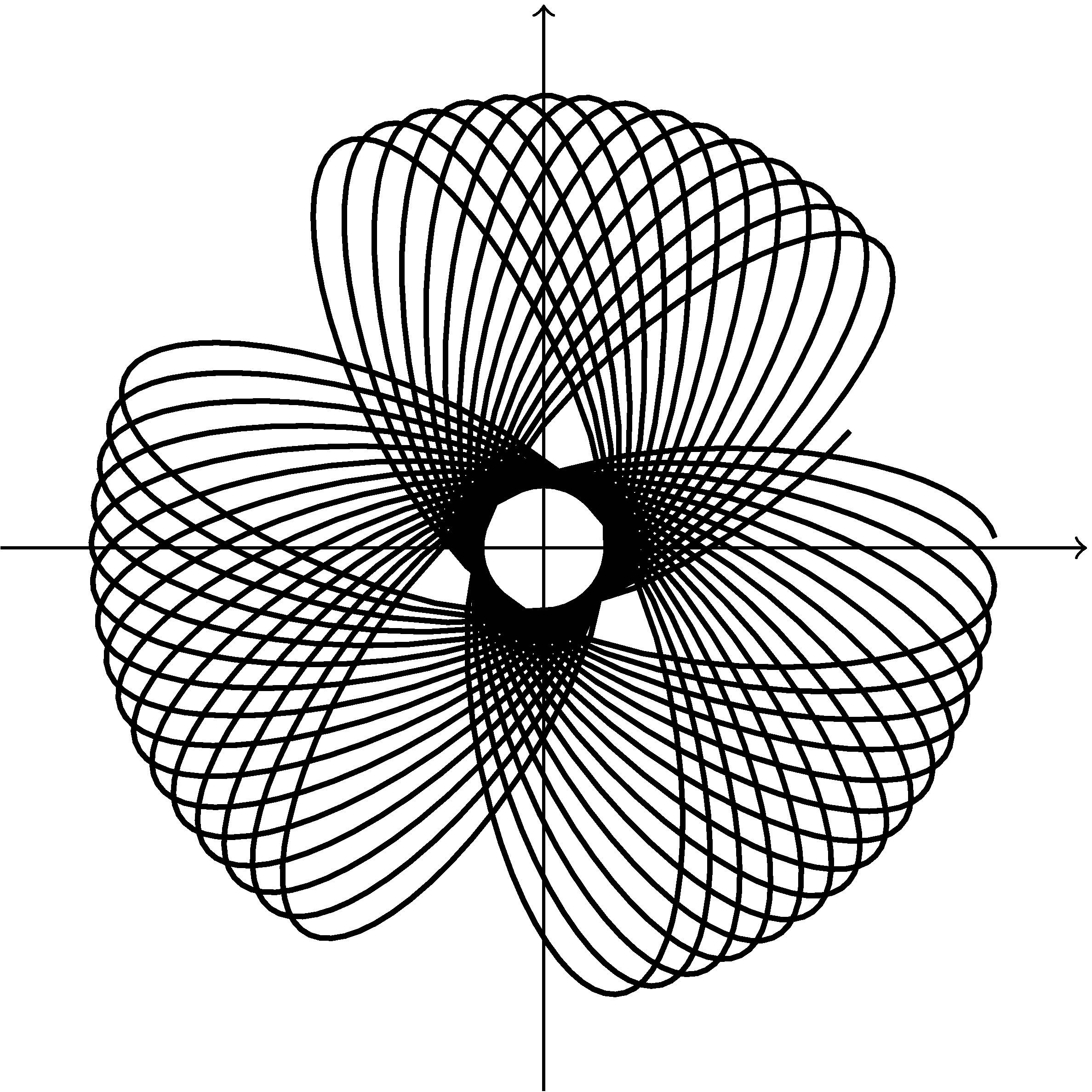 This link answers the question well:

It sidesteps some of the difficulties you would otherwise have with this class of problem by looking at the potential, which is a metric of the square of the radius, which eliminates the square root, which can then be isolated with each variable.

Solved, it is the following, with the z-component omitted because we don't need it.

Is this an ellipse? A valid equation for an ellipse is:

The starting time is arbitrary, so we are free to add some constant to $t$ to get these two things to be the same curve, but that alone doesn't seem to do it. You also need to rotate the graph, but that will add one more degree of freedom and probably allow you to show definitively that all of these orbits are ellipses.

Here is an example graph.

You'll notice that the center of the ellipse is at the origin, and this is the CM of the Earth in our problem. That differs from planetary orbits where the CM is at a focus of the ellipse. Obviously, the speed while moving around this ellipse will also be different. Here (as with planetary orbits), it will be the fastest nearest to the CM. So while the highly elliptic orbits in empty space we're familiar with follow kind of a swoop-stall pattern, this type of orbit follows more of a stall-swoop-stall-swoop pattern.

Not the answer you're looking for? Browse other questions tagged newtonian-gravity orbital-motion earth dark-matter or ask your own question.

13
How Does Dark Matter Form Lumps?
8
Temperature of WIMPs
3
Uniqueness and existence of polygonal orbits through a spherical shell
13
Mars just collided with Earth! A question of eccentricity
1
Could black holes interact with dark matter at distances far greater than matter?
1
Dark Matter - Why no strong interaction?
5
Current constraints on Dark Matter self-interaction from galactic profiles
1
Why Earth's axis is in this particular position with respect to the perihelion?
2
Are weakly interacting massive particles interacting weakly?