How does heat conduction take place in sound wave propagation?

I am new to wave mechanics. It would be of real help if someone could elaborate, although not in too much detail(as I am still a beginner) regarding the conduction of heat during rarefractions and compressions. What I am looking for is not a mathematical explanation, but a visual one, with which I can visualize as to how the process happens. I am not able to understand and visualize how the temperature increases/decreases during a rarefreaction or compression, and how it is adiabatic. Thanks in advance

As you might know, a sound wave is an example of a longitudinal wave. In brief, a longitudinal wave is a wave in which the particles of the medium vibrate( a more appropriate terminology would be 'perform a simple harmonic motion') in the same plane where the wave travels. This figure illustrates that: 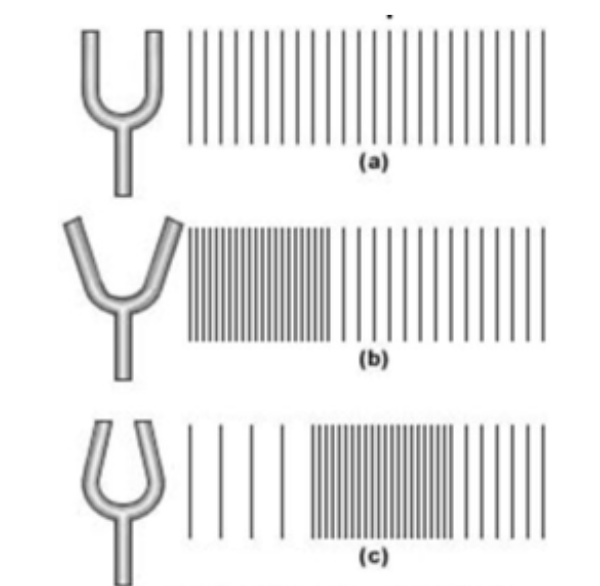 Here, you see a tuning fork set into vibration which consequently sets the particles of the medium around it in vibrations as well and this finally results in a longitudinal wave being formed.

If we focus more on how this happens, we see that when the sound wave is initiated, (you can simply visualise this by thinking of talking to someone) When we speak, the air particles right in front of our mouth are set into vibrations.

These particles then set their neighbouring particles into vibrations, and so on. This gif illustrates this:

As you can see, in the region of compressions, the density is increased. And as you might know, any particle of any medium has the property that it has some amount of vibrational kinetic energy. In the compressions, particles are packed in a smaller region which means more pressure(as the density is increased here). Consequently, this increases the temperature in this region. which also results in more energy being trapped.

Also, this happens so fast that this thermal energy does not have any time to flow out from the compressed region. The same applies in the case of rarefied regions. Consequently, it is safe to assume this to be adiabatic which is what Laplace did to correct Newton's formula for speed of sound in medium.

Remember that these variations are quite small and negligible. Think! Have you ever felt the temperature suddenly increasing/decreasing while speaking to someone?

OK, just so it is there, controversial as it is.

The way heat conduction takes place in sound wave propagation, is by a sequence of condensations and evaporations of particles as a consequence of local increase and decrease of pressure caused by the wave. As the energy provoking the condensation may vary, but the energy released in evaporation may not, the difference is shared by the particles involved as thermal energy. There is a radiating component involved too, but that is in comparison negligibly small. This concludes the full extend of heat conduction, caused by wave propagation.

All credits/discredits to the author. No references.

Not the answer you're looking for? Browse other questions tagged newtonian-mechanics waves acoustics or ask your own question.