How does friction allow bodies to rotate on merry go round? [duplicate]

Ask Question
Asked 2 months ago
Active 2 months ago
Viewed 164 times
0
$\begingroup$
This question already has answers here:
Why does friction play the role of centripetal force during the turning of a car? (3 answers)
Closed 3 months ago.

I did check some answers on similiar questions here, but I wasn't satisfied with the answer. When we are sitting (or if there is any body) on merry - go - round there should be some net force which acts radially in to keep us rotating relatively to ground. In this case it is said that static friction is this force since we are not moving with respect to merry - go - around. We are looking at things from inertial reference frame (no inertial forces). As far as I know static friction opposes motion when some outer force tries to move it from relatively to some other surface (to move us relatively to merry - go - round). So, there should be some force acting radially out to cause static friction acting radially in, but even in that case sum of forces acting in radial direction is zero since static friction balances outer force trying to move us. If so, there is no net force acting radially in to allow rotation. Where have I gone wrong?

Friction is the centripetal force in this scenario and aside from gravity it is the only force acting on the person on the Merry-go-round.

In an inertial reference frame (say you're standing on the ground looking at the Merry-go-round) and you are staring at person B on the Merry-go-round, you will see Person B moving in a circular motion. From Newton's first law, we know objects with no net force acting on them travel at a constant speed in a straight line which indicates that there is a net force on Person B (static friction acting towards the centre).

static friction opposes motion when some outer force tries to move it...

No, it is truer to say "Static friction always opposes relative motion at the point of contact". This does not necessitate the existence of another force. The centripetal force (static friction) is keeping person B constrained to a circle but is also giving them radial speed. If the force of static friction stopped, they would fly off in a tangential direction.

What may confuse you is your interpretation of Newton's 3rd Law. While the force of friction acts on person B, you may think that this law states that they are constrained to the circle because of another force. But this law states that each force acts on a different object. The force of friction acts from the Merry-go-round on Person B but Person B exerts an equal and opposite force in the Merry-go-round itself, so it has nothing to do with person B being constrained to a circle. There is still a net force acting inward, but it has to do with keeping them in that circle. If you increased the centripetal force, the circle would decrease in radius.

If the forces were balanced in the inertial frame, then the net force would be $0$ and according to Newton's first law, Person B would travel in a straight line but they move in a circle.

With the merry-go-round rotating at constant angular velocity, for an object fixed at the edge of the merry-go-round, in the inertial frame (observer on the ground) the object is accelerating due to the change in its velocity vector even though its speed is constant (acceleration is a vector). The force that causes the acceleration is radially inward and is called a centripetal (center seeking) force; in this case the centripetal force is due to friction.

Short and simple: friction opposes relative motion between surfaces. You do not need an opposing force for there to be friction.

However, as shown in the FBD of the block, the friction force the merry-go-round exerts on the object is the only external horizontal force acting on the object and is analogous to the example given in the answer by @BioPhycisist. It is this net force on the object that causes it to accelerate radially inward giving it circular motion. 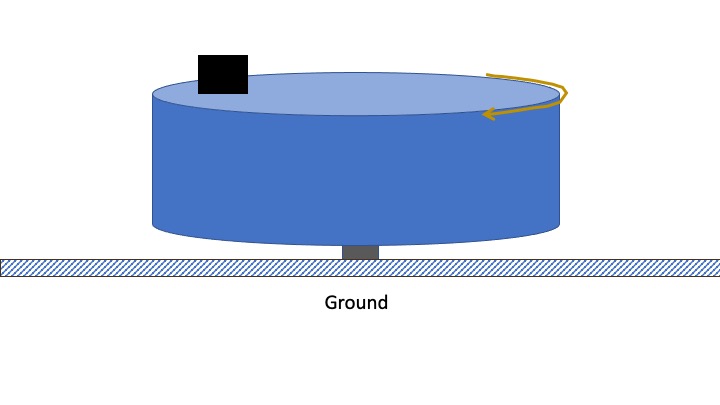 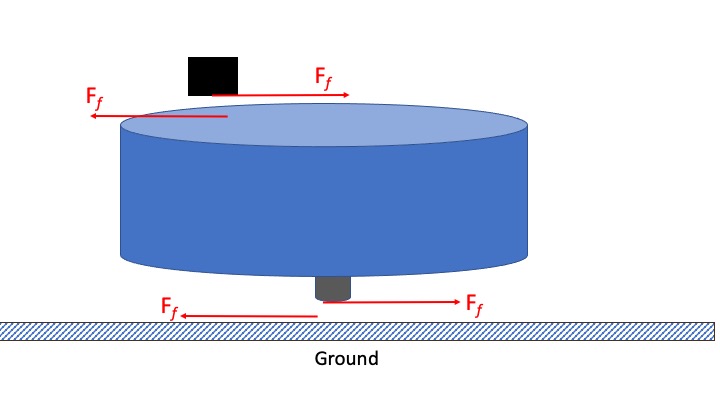 The friction force on an object which is sitting on a rotating turntable acts toward the center of rotation and provides the required centripetal acceleration.

Not the answer you're looking for? Browse other questions tagged classical-mechanics rotational-dynamics centripetal-force or ask your own question.

2
Pseudo force in rotating frames
0
Is this a correct understanding of circular motion?
1
max speed of circular motion
3
How is direction of static friction not opposite in direction but perpendicular when dealing with centripetal forces?
0
Is this the correct way to think about why static friction is directed radially during a turn on a level surface?
1
Net force on a brick sitting on an accelerating merry-go-round
3
How do car wheels use friction to accelerate?
3
Conceptual difficulty in a rotational dynamics
5
Calculating the direction of friction on an inclined plane/Determining the fate of a round body on an inclined plane