How is buoyant force still upwards in a mixture of fluids 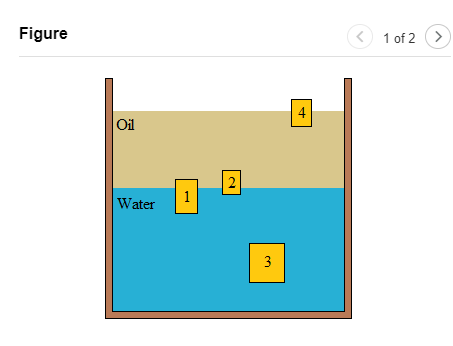 For objects 1 and 2, how is the buoyant force by oil still upwards? Shouldn't the pressure caused due to the oil push it down?

Yes, you are right. The oil only pushes down on 1 and 2. Since only the top of those are in the oil, it pushes down (the sides cancel). The oil cannot provide any upward force because there is no oil below the objects.

However, the fact that the oil pushes down on the blocks does not mean the total buoyant force is reduced by the oil; the oil also pushes on the water, which then pushes on the bottom of the objects. More quantitatively, if we have an object of height $H$ and cross-sectional area $A$ whose top surface is a distance $h_T$ from the top of the oil, and if the water-oil interface is at a distance $h_w$ from the top of the oil, the downward force of the oil has a magnitude of

This gives a net buoyant force of

Note that these two terms are in fact the weights of the water and oil displaced,

but that does not mean the oil pushes directly upwards on the objects.

It's like asking why is the Normal Force always upwards. And the oil must exert downward pressure but that is only because of unmissible properties of oil.