What is the relationship between the axes of the coordinate system used for vector resolution?

This question is with regards to the statement made around page 56 (1971 Edition) in Anthony French's Newtonian Mechanics. He is discussing the choice of a coordinate system where the axes are not necessarily perpendicular to each other. Here is the summary of what I read (as applied to vectors in a two-dimensional plane):

I have redrawn the accompanying figure: 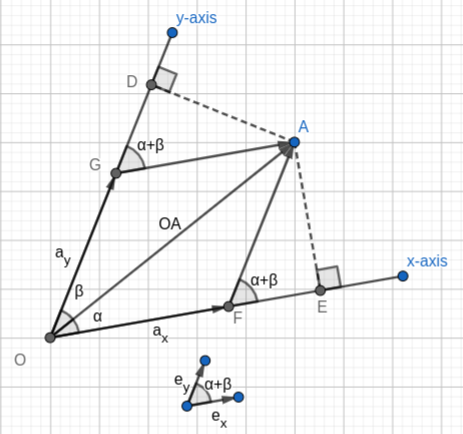 In the case of perpendicular axes in two dimensions, it is clear why it would hold, since $\alpha+\beta=\frac{\pi}{2}$. But I am not sure how it holds in general.

If the relationship holds for perpendicular axes, it cannot be true for your sketch (where one or the other angle is smaller).

Not the answer you're looking for? Browse other questions tagged reference-frames coordinate-systems vectors geometry or ask your own question.

9
Metric tensor in special and general relativity
2
How does one describe how a basis vector changes through space using the Christoffel symbols?
0
Directional cosines and rigid bodies
2
Why do the tangent vectors of coordinate curves correspond to the coordinate basis vectors?