Can I push something standing on a frictionless floor?

Suppose I stand on a friction less floor, and another object of finite nonzero mass stand in front of me. Can I push the mass, so that it has a nonzero acceleration? Also, where does this force arise, since I cannot push the ground, since that would make me slip on the floor.

Absolutely you can apply a force on some other object and make it accelerate. What will happen is that you too will accelerate - in the opposite direction. You push the thing, the thing pushes you, it's classic Newton's Third Law. This is akin to rocket propulsion.

You can apply a force to the object, but since you are on a frictionless surface, you will slide backwards.

In your example of standing on a frictionless surface and pushing another object on that same surface, you exert a force $F$ on the object and the object exerts a force $F$ of equal magnitude and opposite direction on you, according to Newton's third law. See the figure below.

So if your mass is $M$ and the object's mas is $m$, you experience an acceleration of

and the object experiences an acceleration of

Think of you and the object being skaters on an ice rink which is very low friction. What happens if you push against each other? 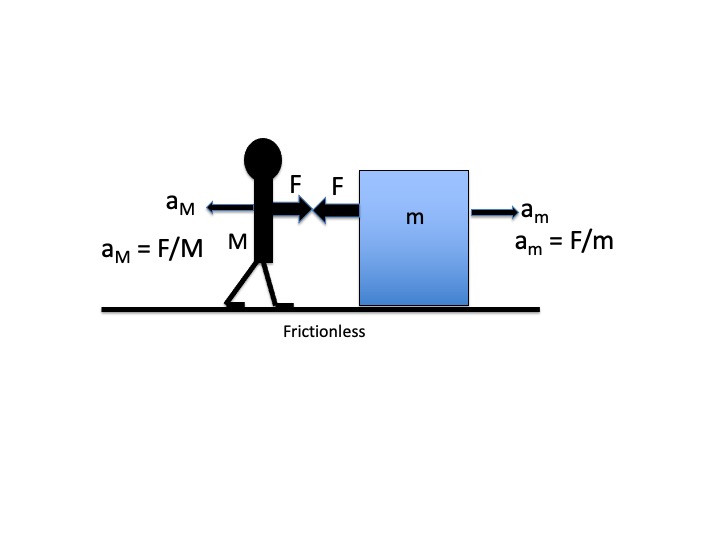 To add to the other answers:

The reason you ask this question might be that you intuitively and from other physics teaching know that you can't move anywhere on a frictionless surface. That you will never be able to set off and move away from your starting point.

Still, though, while you can't move as a whole, you can move your arms and legs about. Because they set off not from the floor but from your torso (when you stretch your arm, a force pushes the arm out while another but equal force simultaneously pushes the body in the opposite direction). Together your limbs of your body constitute a system - it is the system that as a whole can't move (there is nothing to set off from), while the individual parts can.

And a system is represented by its centre-of-mass. It is the centre-of-mass that remains stationary and can't move anywhere. Points of your body can move about by pushing off from each other, as long as an equal "portion of mass", so to say, simultaneously moves in the opposite direction.

In your present scenario you are able to push the box forwards by simultaneously pushing yourself backwards (the box sets off from you, and you set off from the box), so both you and box are able to move away from your starting point. That is because you and box are two parts of a system. Your combined centre-of-mass remains stationary.

As others said, indeed you can. This is a typical exercise in Newtonian mechanics.

As @BobD said, it can be seen from Newton's third law aka action-reaction law. If your mass is $m_y$ and the mass of the object is $m_o$, both objects will experience a force of the same magnitude but in the opposite direction! The acceleration will magnitude will not be the same but it will be scaled with the mass,

So far is what other including @BobD said (with the detail that the accelerations have opposite sign).

Now, this exercise typically is included in the unit covering conservation laws. If, as you said, there is no friction, we can assume there are no external forces to the system, hence, the momentum of the system consisting in you + the object 'o' is conserved at any time.

which is to be conserved, so, if you apply the force to the object and then measure the constant speed you have after it, you can derive the speed that the object has (provided you know both $m_y$ and $m_o$).

This expression is true before and after the you apply the force,

Just ignore the floor! If you push an object in front of you, by extending your arm, surely you and the object will have to move apart! So one or both of you will have to start moving! It makes no sense if only you move unless the other object is somehow fixed in place, since there is no critical difference between the object and you. (To see why, observe that the object could be another person, and you can replace your 'arm' by a mechanically extending stick in-between both of you.)

then imagine what would happen to you when you push the object and think how conservation of momentum can still hold.

5
Can a box on a frictionless rotating table rotate?
2
Does static friction only depend on the forces acting on the axis perpedicular to the plane where an object is located?
0
How does acceleration work for rolling?
2
Can a spinning ball bounce off the floor without slipping?
2
What is the exact role of friction in rolling without slipping?
15
Why does it seem everything I push moves at a constant velocity?
31
Will a falling rod stay in contact with the frictionless floor?
4
Work done walking on moving train