What is the point at which sliding occurs?

I know sliding is when the $V_{cm}$ goes faster than the point of contact on the ground. But I've been reading that sliding occurs when the total torque on the cylinder is greater than the "kinetic friction" or $\mu N$ where $N$ is the reaction force. Am I right in thinking that by rolling about the contact point, there is a "static" frictional force acting in the direction of transverse motion, and ONLY when this is greater than the "kinetic friction" $\mu N$ which acts against the transverse motion, can slipping occur?

I have seen some sources describe this as " In order for the ball not to slip, the torque on the ball from friction can not be less than the total torque on the ball when it rolls, and therefore" : $$RM\mu_{0}gcos(\theta) ≥ \frac{I}{R}a$$ where $R$ = radius, $I$ = MoI, and $a$ = transverse acceleration

Basically, how is this the case? 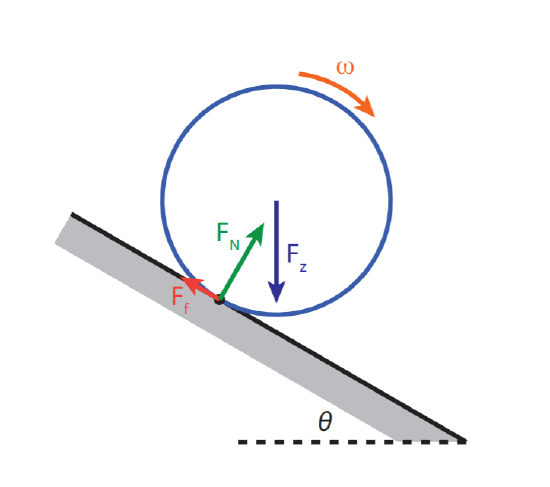 Actually, sliding is when the point of contact on the ground has any speed (let's call this Vb from "bottom" except 0. The cases are:

Gravity applies a force(read:acceleration), to Vcm. It does not apply torque, since it's applied to cm.

Friction applies a torque(read:rotational acceleration). Remember, perfect rolling is when the bottom point is stationary. So, if you take the rotational acceleration due to friction and apply it to the bottom point, if this is equal and not less than the linear acceleration of gravity (it can't be more because friction "auto-throttles"), then the cylinder will perfectly spin. Else, it will partly spin, partly slide. It can only "not spin at all" if friction is zero.

Now, static friction is known to be just a little higher that kinetic one. This means that it is possible to find a surface such that if you put a still cylinder on it it will do a perfect spin, while if you put the same cylinder and boost it a bit to start slide, then it will keep sliding (the lower, kinetic value of the friction will never provide enough torque to stop the sliding and convert it into rolling). 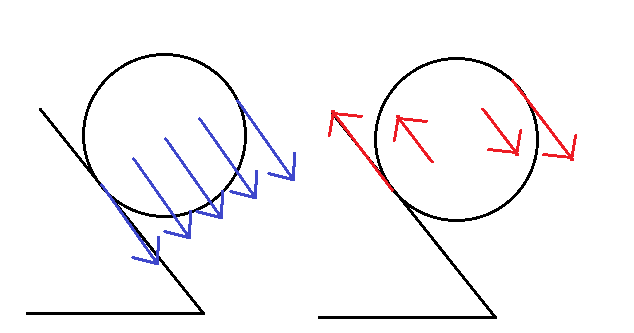 The blue linear acceleration vectors are the result of gravity's force, the red of friction's torque. Contrary to what you say on your comment, what happens on the perpendicular axis is not uniform.

If the red arrow can be as large as the blue one on the bottom point, then it(the bottom point) shall stay still and always have 0 velocity. The other points of the object will receive the "right" combination of accelerations so what you see is perfect spin. Else, the red arrows will be somewhat smaller and what you will see is the partial spin, partial rolling.

Not the answer you're looking for? Browse other questions tagged newtonian-mechanics rotational-dynamics friction rotational-kinematics or ask your own question.