How can the graviton spin-2 string have emerged from the strong interaction, mediated by spin-1 gluons?

The origin of string theory can be traced back to 1969:

String theory was first studied in the late 1960s as a theory of the strong nuclear force, before being abandoned in favor of quantum chromodynamics. 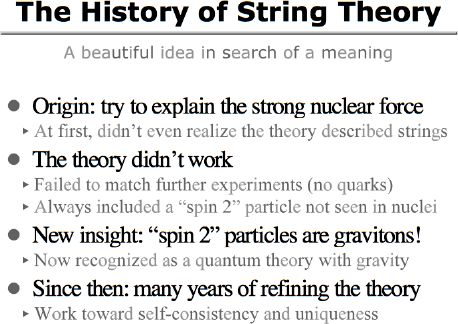 So, string-like objects were used back then to explain the workings of the strong force. The strong force is nowadays seen in the light of quantum chromodynamics (I typed chronodynamics first and wondered if one can speak of chronodynamics, the dynamics of time). Massless and colored spin-one gauge fields represent the strong force.
As can be seen in the very summit history above, spin 2 particles were contained in the attempt to describe the strong interaction. Quarks and the chromodynamic field were not known yet. The strong interaction between nucleons and mesons (the last of which were used in an even earlier attempt to describe the strong force) was considered as a bundle of strings existing between the particles that take part in a strong-force-mediated reaction. As such, the model could explain the force increasing with distance.

Now, gravitons carry spin-2. The chromodynamic gluon field has spin-1. This field wasn't known back then. Was the string bundle (quark confining flux tubes) somehow associated with spin-2 particles? I found this (in this question):

These higher spins states also have higher masses. Amazingly, when all the possible states are plotted in a spin-versus-mass-squared graph, the result is a beautiful set of straight lines with even spacing between the 2-spin additions. These lovely and highly unexpected lines are called Regge trajectories, and they are the true origins of string theory.

Spin-2 is mentioned here. Is this how the strong-string-bundle in the picture used is related to spin-2? The spin-1 colored gluon field was not known at the time, so spin-2 could be involved, but usually, spin-2 is related to quantum gravity. Tensor particles are related to spacetime distortions. How do they emerge in the early string description of the strong force?

The gravition, the speculative quanta of GR, was posited by looking at linearised GR and was shown to carry spin-2.

Whilst Regge trajectories of the strong force plots spin against mass-squared and they have found resonances of upto spin 11, these - as far as I understand - can't be elementary particles as there is a theorem by Weinberg that QFT constrains the spin of elementary particles so that particles of spin higher than two are inconsistent.

In other words, the graviton hasn't been detected yet (and this is why I called it a speculative particle).

Is this how the strong-string bundle ... is related to spin-2?

Essentially, the early models of the strong force, before QCD, were dual resonance models. It's here where Veneziano discovered a formula for the amplitude which had certain symmetries (and hence the dual in the dual model), called the Veneziano amplitude. It was later shown by Susskind & Nambu that this amplitude arose from quantising the bosonic string.

However, on quantising a bosonic string, we find in its low energy spectrum a tachyon (a faster than light speed particle), and it's for this reason, amongst others that the model was abandoned for the more fertile pastures of QCD, especially after t'Hooft showed that quantised Yang-Mills theories were renormalisable.

But, it was also discovered that the low-energy spectrum also contaimed a spin-2 particle. It was Schwartz that suggested this particle be identified with the graviton and to investigate the theory as a theory of quantum gravity.

Not the answer you're looking for? Browse other questions tagged string-theory quantum-gravity strong-force or ask your own question.

45
What are the strings in string theory made of?

7
Why does the non-linearity of the string action prohibit stretching due to strong excitations?
1
Can we quantitatively understand quark and gluon confinement in quantum chromodynamics and the existence of a mass gap?
4
How are gravity and the strong nuclear force related?
4
Pion-Meson production during nuclear force
11
String theory and one idea of "quantum structure of spacetime"
2
How do Graviton-based theories of gravity explain the expansion of the universe?
3
How do you explain stretched metrics in the graviton picture?
0
Can we infer from weak isospin symmetry the existence of sub-quark particles?
1
Black holes are excellent scramblers, but can they scramble points in the string-theory landscape?