Hubble parameter data from Cosmic Chronometers. Has time dilation been taken into account?

The expansion history of the Universe can found by measuring the differential age evolution of cosmic chronometers. This yields a measurement of the Hubble parameter H(z) as a function of redshift.

Then the quantities $dz$ and $dt$ need to be measured for a passively evolving system such as a group of stars, $dz$ is found from spectroscopic measurements. 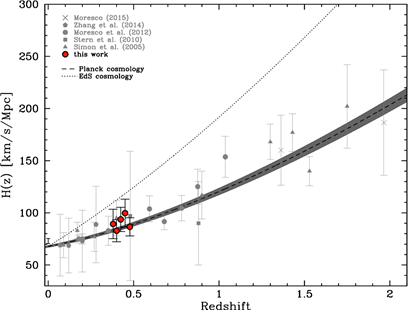 and a plot of $H(z)$ against $z$ can be obtained like the one above.

The method doesn’t need absolute ages of stars, but the difference in ages of the stars.

The question is this:

Since both the actual age of a star and the difference in ages of a pair of stars are both subject to time dilation, has this properly been accounted for in the method?

For example, with easy numbers.

It doesn’t seem to be taken into account, or is it already there in equation (1)?

The method in summary is to observe two galaxies that were assumed to have formed at the same cosmic epoch but are observed at different redshifts. The difference in their redshift is $\Delta z$ and then by measuring some spectral feature that depends on age (in their own frame of reference), to estimate the difference in age between them $\Delta t$. The idea is to choose a pair of galaxies that formed at a considerably higher redshift than where they are now observed; where "considerably higher" I think means that the time since they formed is a lot longer than the observed age difference between them.

The key thing here is that the calibration of whatever age indicator you are using is done (or calculated) in the rest frame. When we look at a galaxy at a redshift of 1, we see their stellar populations as they were about 7.9 billion years ago. A galaxy at redshift 1.1 is seen as it was 8.3 billion years ago (these numbers based on a standard cosmological model). We therefore expect to see a difference in the age of their populations of about 0.4 billion years, providing they were both formed at the same time at a much higher redshift than they have now. There is no further time dilation to insert into these ages or age differences.

You might be confused by the time dilation that must be taken into account if we were to see something change with time. For example if we could observe a very distant star pulsating and the pulsation period gave the age, then yes, that would need to be corrected for time dilation to estimate the rest frame pulsation period. But that correction is already done when observing spectral features - you just blueshift it back to where it was in the rest frame of the galaxy.

Not the answer you're looking for? Browse other questions tagged cosmology space-expansion redshift or ask your own question.