How can the products of a higher energy fusion reaction be heavier?

I was told the mass defect of an atom is the difference in mass of the atom versus it's particles, for example:

this negative difference means carbon has a negative mass defect, thus energy is released when carbon is formed, or energy is required to split carbon into it's particles.

for deuterium + deuterium -> either (neutron + He-3) or (proton + tritium), I would assume that a less massive product would also yield more energy. In these reactions, the reactants are the same, but I'm reading that the He-3 reaction generates 3.27 MeV and the tritium reaction generates 4.03 MeV. (image bellow from this link). is this value per nucleon or something? 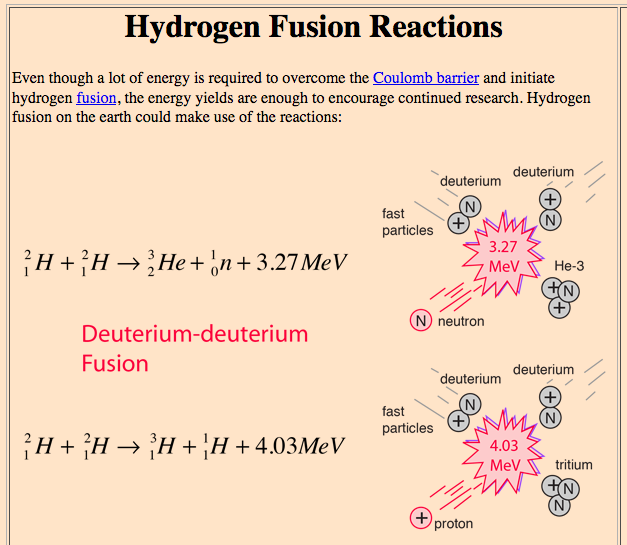 Since the tritium reaction yields more energy, how can it be that tritium is heavier (more massive) than He-3?

If tritium has more mass than He-3, shouldn't that reaction produce less energy?

Is the extra proton and neutron in each reaction weighed differently?

The quoted energy release value is per overall reaction.

Note that tritium is two neutrons plus a proton while He-3 is two protons plus a neutron. Neutrons are very slightly heavier than protons which means that tritium doesn't weigh the same as He-3.

Not the answer you're looking for? Browse other questions tagged energy mass nuclear-physics fusion or ask your own question.

11
How to explain $E=mc^2$ mass defect in fission/fusion?
2
Calculating the minimum Lawson parameter for sustained d-d fusion
3
Can Deuterium undergo a nuclear fusion without the presence of Tritium?
0
Energy release with hydrogen fusion
3
How does mass-energy equivalence work differently in nuclear decay where there is nucleus excitation?
0
How exactly does nuclear reactor work in generating energy, when the energy created from fission transformed into binding energy?
0
Energy budget of of proton-proton fusion (p-p chain)
2
How can nuclear fusion release energy (even in principle)?
2
$D+T$ fusion-fisson hybrid using particle accelerators