Can you expect to see Island of Stability nuclei in matter flung off of neutron stars?

Apparently, merging neutron stars fling off baryon-rich matter that condenses into heavy elements, and this has been observed electromagnetically.

It's not clear to me from the above sources whether they were able to get spectra for identifying the produced elements. ("Spectrally featureless" and "infrared [...] heat", it says.)

If Island of Stability isotopes exist, would you expect to see them in the ejecta from kilonovae? And if so, is the relationship there strong enough that you could expect to use their absence or presence in such ejecta as a proxy for confirming or disproving whether they exist?

Note that "island of stability" means different things to different people. If you just look at a table of isotopes, there is a very clear "strait of instability" beyond the doubly-magic lead-208. In that picture, all of the actinides (e.g. uranium) live on an "island of stability." Those elements are produced in kilonovae; kilonovae are responsible for a substantial fraction of all elements heavier than iron. 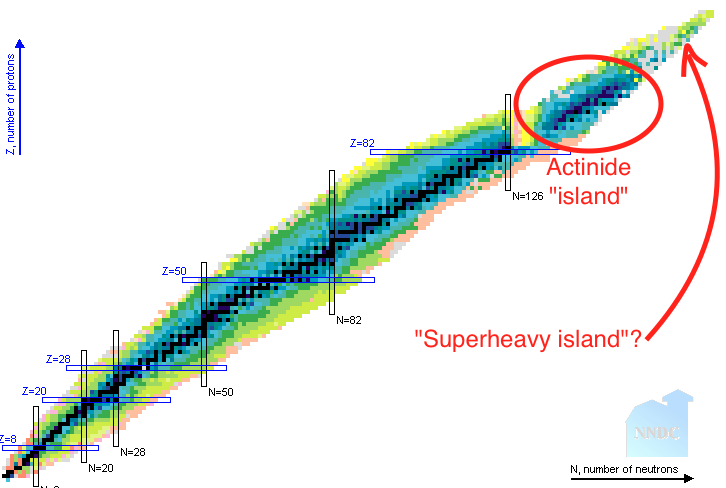 An open question is whether there exists a second "island" of even heavier elements whose lifetimes are "long." There is an illusion of such an island in this particular figure due to missing data for neutron numbers in the range $160 < N < 168$. However, of those superheavy isotopes which have so far been observed, the trend seems to be that the longest lifetime for a given mass $A$ only seems to decrease as $A$ gets bigger.

The absence of any geological evidence for a second, superheavy island of stability probably has more to do with the maximum lifetime of any of its hypothetical members than with whether such heavy fragments are produced by kilonovae. Even for the actinides, there are only three "primordial" isotopes with lifetimes comparable to the current age of the Earth; all the others occur only as decay products or in transmutation laboratories.

The optical/IR spectra from kilonovae (probable merging neutron star events) are not sufficiently detailed that you can identify individual chemical elements. The turbulent and high speed environment of an expanding fireball means that individual absorption lines and features will be (Doppler) smeared together. In addition there is just the problem of the overwhelmingly large number of transitions from hundreds of radioactive species, for most of which the necessary atomic data are very sparse (e.g. Pian 2021).

Instead, there are strong indications of enhanced opacities across broad wavelength intervals that are diagnostic of the production of heavy r-process elements in general (particularly lanthanides, e.g. see the introduction of Barnes et al. 2020 and references therein). There are thus no real constraints in the presence or not of possible rare super-heavy elements.

In terms of whether they could be there - why not? The crusts of neutron stars are expected to contain far more exotic and even heavier neutron-rich nuclei. If released "into the wild", some of these must surely decay via any islands of stability on the way. However, if they had half lives measured in years or less then I would say the prospects for observing them in optical/IR spectra were poor. Possibly there is more hope in looking for the gamma ray signatures of their decay modes (e.g. Korobkin et al. 2020)?

Not the answer you're looking for? Browse other questions tagged nuclear-physics astrophysics binding-energy neutron-stars elements or ask your own question.

14
Mining a neutron star — what do you get?
1
Island of Stability in Astronomical Surveys

2
What about the neutron stars with CMB temperature as dark matter?
1
Could there be a correlation between the Island of Stability and dark matter?
8
Is it possible that black holes are also neutron stars, but so dark that we cannot see them?
2
Can we apply no hair theorem to neutron stars?
5
Can astronomers observe neutron stars optically?
3
Can stars contain neutron-star dense cores?
2
Can gravitational waves be emitted from single neutron stars?
2
Can muons be used to reach the island of stability of superheavy elements?