What is an example of an electron acting as a particle? [closed]

Any help would be much appreciated!

In an old-school TV picture tube, electrons were shot into one end of it, accelerated, steered into specific directions, and then collided with a thin phosphor coating on the inside of the picture end of the tube. Each collision created a burst of light, building up a visible picture for the TV watchers.

This process is well-modeled by envisioning the electrons as particles.

The original SLAC particle accelerator can be thought of as a machine for adding huge amounts of energy to electrons by shooting them down an evacuated tube two miles long, in which the electrons were separated into individual bunches and then made to surf on the crests of an intense microwave beam traveling down the same tube.

This process is also well-modeled by envisioning the electrons as particles.

Since the idea of the electron as a particle predates the idea of it as a wave by a quarter century, why not ask why electrons were thought of as particles at first? And for that, why not go to their discoverer? In 1897 J. J. Thomson performed experiments on "cathode rays", the rays emitted when a voltage is applied between metal plates in vacuum. At this point, the idea of matter being made of atoms was almost a century old, if we count from Dalton. If we count from the Greeks, millennia. Boltzmann had published his statistical theory of gases 25 years previously, although it would not be universally accepted for another decade or so (Einstein's Brownian motion paper). Measurements of the charge-to-mass ratios of ions had been performed, Becquerel and Curie were working under atomism, etc. Thomson argued

The experiments* discussed in this paper were undertaken in the hope of gaining some information as to the nature of the Cathode Rays. The most diverse opinions are held as to these rays; according to the almost unanimous opinion of German physicists they are due to some process in the aether to which--inasmuch as in a uniform magnetic field their course is circular and not rectilinear--no phenomenon hitherto observed is analogous: another view of these rays is that, so far from being wholly aetherial, they are in fact wholly material, and that they mark the paths of particles of matter charged with negative electricity. It would seem at first sight that it ought not to be difficult to discriminate between views so different, yet experience shows that this is not the case, as amongst the physicists who have most deeply studied the subject can be found supporters of either theory.

The electrified-particle theory has for purposes of research a great advantage over the aetherial theory, since it is definite and its consequences can be predicted; with the aetherial theory it is impossible to predict what will happen under any given circumstances, as on this theory we are dealing with hitherto unobserved phenomena in the aether, of whose laws we are ignorant.

The following experiments were made to test some of the consequences of the electrified-particle theory.

By measuring the charge-to-mass ratio, he could rule out that cathode rays were atoms or molecules, for the particles are far too small or light.

Thus for the carriers of the electricity in the cathode rays $m/e$ is very small compared with its value in electrolysis. The smallness of $m/e$ may be due to the smallness of $m$ or the largeness of $e$, or to a combination of these two. That the carriers of the charges in the cathode rays are small compared with ordinary molecules is shown, I think, by Lenard's results as to the rate at which the brightness of the phosphorescence produced by these rays diminishes with the length of path travelled by the ray. If we regard this phosphorescence as due to the impact of the charged particles, the distance through which the rays must travel before the phosphorescence fades to a given fraction (say $1/e$, where $e = 2.71$) of its original intensity, will be some moderate multiple of the mean free path. Now Lenard found that this distance depends solely upon the density of the medium, and not upon its chemical nature or physical state. In air at atmospheric pressure the distance was about half a centimetre, and this must be comparable with the mean free path of the carriers through air at atmospheric pressure. But the mean free path of the molecules of air is a quantity of quite a different order. The carrier, then, must be small compared with ordinary molecules.

Being conceptually simple, in agreement with experiments, and in line with the general paradigm of atomism, it is not difficult to find plausible the idea that electrons are particles. (Perhaps it is a twist of irony that de Broglie and Schrödinger then some 20-30 years later showed that the Germans were -- in a very loose sense! -- also right.)

My absolute favorite example of the electron acting as just a particle is the bubble chamber. 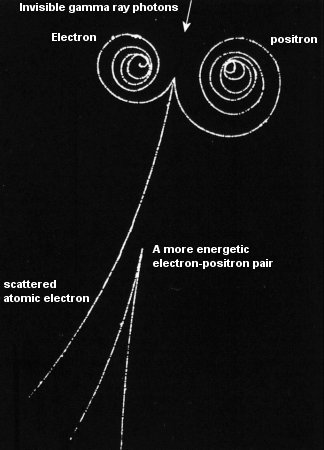 Is it possible to produce images of pair production in home-made cloud chamber?

As you can see on the left, the electron you are asking about is just a "scratch", leaving nothing but a track (of microscopic bubbles) behind as it spirals inwards. I believe this is the best example of the electron being a point particle that is able to leave this linear track. Just a (ionization) track, no waves.

Some experiments use some kind of medium analogous to ballistics jell. The electron travels through it and it's trajectory is traced out or left in it, so that it is easily seen. When there are electric fields the trajectory will spiral in accordance with lorents force and classical laws of electrodynamics. These are individual electron trajectories, and for intents and purposes, completely adheres to electrodynamics and Maxwell equations.

There are similar experiments that involve particle collisions or decay, were one particle splits into two and the two trajectories can be seen. I think this is common with early particle accelerators. Not sure if cern still uses such things, because here the scales are very large probably in correspondence with q.m. approaching classical mechanics. Cern however is completely dealing with q.m. phenomena I would presume. Sorry no sources as of yet only my vague recollection.

I think that this example (from Wikipedia, see comment below) shows clearly that the electrons (and photons) are treated in a particle-like way.

Not the answer you're looking for? Browse other questions tagged particle-physics experimental-physics electrons wave-particle-duality or ask your own question.

27
Do standard model particles actually exist or merely usefully describe behaviors of a medium?
8
Is it possible to produce images of pair production in home-made cloud chamber?
2
Understanding decoherence in the double slit experiment

1
Why does Davisson-Germer experiment confirm electron's wave-particle duality?
2
What happens to the physical properties of electrons after diffraction?
0
Electron waves through conductors
0
Question about point particle vs. wave equation location
0
How the wave nature of electron manifests the information that it is charged?
1
How do electron wavelengths relate to orbitals and probability density?
10
Example where photon acts only as a wave