Why have oscillating hoops the same frequency while swinging? [closed]

How can you explain that a group of circular hoops of radius R, which are hung over a knife edge, (with different lengths) have the same frequency when brought in oscillation?

Remarkable enough, the hoops have the same frequency of oscillation when brought out of their equilibrium position. 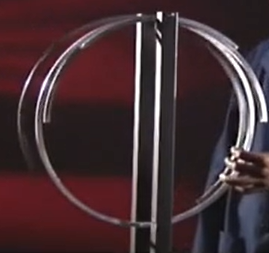 The reason is that the period will be dependendent on the radius of curvature $R$ but not on the length of the hoops, provided the oscillations are small and the hoop hangs at its center of curvature (i.e. with the same amount on mass on the two sides).

To prove this, we will go step by step: first we consider a full ring and solve its motion, then we generalize the results for fractions of a ring. It's going to be a long road but we will prove the final results eventually! Brace with me!

For oscillations, we need to use Newton's equation in angular form i.e.

where $\alpha$ is the angular acceleration around a given axis, $I$ the moment of inertia and $\tau$ the total torque. Let's solve this for the case of a ring.

the moment of inertia

$$I_o=MR^2$$ which is our moment of inertia around $o$. To get the one around $p$ we use the parallel axis theorem and find

We choose again $p$ as a reference point for the torque so that the fixing force keeping the pendulum fixed has no net momentum. This means that the total torque is given by gravity only, which points in the negative $y$ direction and acts on the center of mass. For a full ring the center of mass is always at a distance $R$ from the point $p$ so that the total torque is given by

where $\phi$ is the angle between gravity and the position vector of the center of mass as it oscillates.

More in general, for a pendulum like this, the period will always be given by

The general case of a hoop

We use what we learnt to compute the general case. We now have a fraction of a ring (a hoop) of radius $R$ and defined by its arc $\gamma$ (the angle the hoop forms) so that its length is $L=R\gamma$ and its mass density is $\lambda(\gamma)=M/R\gamma$.

What we need to prove is that our final result (the period) does not depend on $\gamma$ i.e. it is the same for all kind of hoops!

To find its period we need the new moment of inertia and the new position of the center of mass.

As far as the distance from the center of mass is concerned, that is easy and we can integrate the position of the center of mass from the origin, using in polar coordinates $y=Rcos(\theta)$ (due to the way in which we defined $\gamma$ as the angle with the y axis!) and integrating again 2 times from $0$ to $\gamma/2$

For the moment of inertia, again, we compute $I_o$ around the center which is now given by the same integral as before, except we only compute it from $0$ to $\gamma/2$ and multiply by two (because of the symmetry around the $y$ axis), so that

which eventually turns to

and again for $\gamma=2\pi$ we recover the moment of inertia of a ring.

exactly as in the ring case as the $\gamma$-dependent factor $\left(1-{2\over\gamma}\sin(\gamma/2)\right)$ simplifies on both sides.

So the final result is that the period does not depend on anything except the radius of curvature $R$. Also this result is mass-independant so you could to that also with hoops of different mass/materials.

Not the answer you're looking for? Browse other questions tagged homework-and-exercises newtonian-mechanics rotational-dynamics oscillators moment-of-inertia or ask your own question.

3
What is the significance of clamping the center of the spring?
1
Affect on Spring constant on cutting the spring into 2 unequal parts
0
Why does the sphere with the smaller radius (r1) have the greater charge density?
6
Understanding the differential in integrals
2
Is angular frequency the same as angular velocity or are they different?
1
Why do two masses connected to each other by a spring have the same frequency of oscillation?
0
Is natural frequency of an LC circuit equal to angular frequency? Why don't the units match?
2
If you keep the center of gravity of two objects on each other would you never be able to separate them?