Violation of Kelvin's statement of second law of thermodynamics 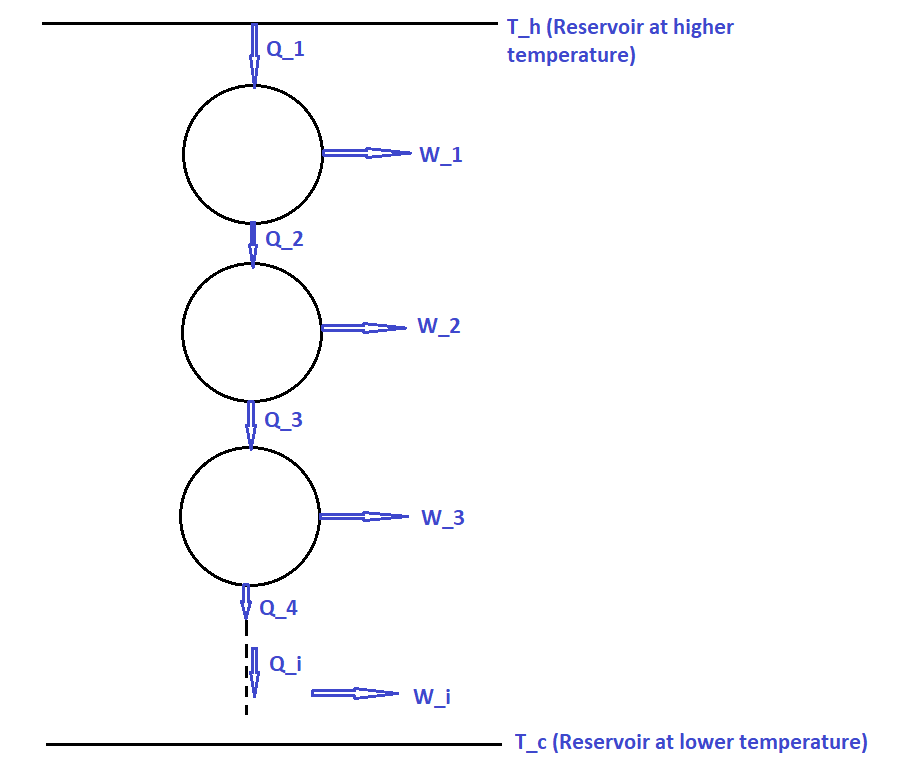 $\mathbf{Edit}$ - I have found that the question which I ask is not so precise. So I am rephrasing my question.

We know that a process is said to be thermodynamic if it follows first and second law of thermodynamics (I haven't studied 3rd law). If I have two heat reservoirs at temperature Th and Tc with Th>Tc (say 1000K and 500K respectively) having infinite heat engines with each having same efficiency (so they are not carnot engines as efficiency is independent of temperature of heat reservoirs), operating between them such that each heat engine dumps heat to the next. So the subsequent difference of temperature at which heat exchange takes place between them tend to zero. So, heat dumped by the engines also tend to zero and net work tend to Q1 as shown in my question.
So in the overall heat engine, heat taken by engine completely gets converted into work done by the engine. So we can see that the overall heat engine does not follow Kelvin's statement thus not undergoing thermodynamic process. But each engine in infinite set of engines follows first law and Kelvin's statement. So can we make a conclusion that if we consider a infinite sequence of thermodynamic processes then the net process which consists of all those thermodynamic processes may not be thermodynamic?
This is my exact question. I am extremely sorry for asking less precise question.

By Kelvin's statement of second law of thermodynamics, we can't have an engine operating between two heat reservoir having efficiency 1.

Correct, and the reason is the Kelvin-Planck statement says no heat engine can operate in a cycle while transferring heat with a single heat reservoir, meaning some heat must be rejected to another reservoir resulting in less heat available to do work. For the efficiency to be 1, all of the heat taken from the heat reservoir would be converted to work in a cycle.

The corollary to the Kelvin-Planck statement is no heat engine can have a higher efficiency than a Carnot Cycle operating between the same reservoirs. The Carnot efficiency is

So in theory the efficiency of a Carnot heat engine it can approach 1 for if either $T_{L}\rightarrow 0$ or if $T_H$ $\rightarrow \infty$.

So, theoretically, we can take infinite heat engines between two heat reservoirs such that each heat engine dumps heat to the next one.

Sure, but I fail to see how the overall combined efficiency of your infinite number of heat engines is any different than one Carnot heat engine operating between the same two reservoirs which, as already pointed out, can theoretically approach 1.

𝐄𝐝𝐢𝐭 - I have found that the question which I ask is not so precise. So I am rephrasing my question.

The work done by any of your heat engines is

And the efficiency of each heat engine is

As you place more engines between the two reservoirs the less the difference in input and output temperatures and heat transfers for each engine, so that

So while the addition of each heat engine adds work to the total, the work done by each additional engine approaches zero. The net effect is the work done is equal to that of a single engine operating between the two reservoirs, and the efficiency of that engine is

There is no violation of the second law.

Concerning the invocation of the monotone convergence theorem: I think you have confused a lower bound on a sequence of numbers with the infimum of that sequence. As an example, consider the following monotonically decreasing sequence of positive numbers: $$2, \frac{3}{2}, \frac{5}{4}, \frac{9}{8}, \frac{17}{16}, \frac{33}{32}, ..., 1 + \frac{1}{2^n}, ...$$ This is a monotonically decreasing positive sequence whose infimum is not zero. The number 0 is less than all numbers in the sequence, but it is not the largest such number with that property, and so it is not the infimum of the sequence. (It shouldn't be too hard to see that 1 is the infimum instead.)

Not the answer you're looking for? Browse other questions tagged thermodynamics statistical-mechanics work heat-engine or ask your own question.