To an observer inside a black hole, why is the rest of the universe outside the black hole not a white hole?

To an observer inside a black hole, why is the rest of the universe outside the black hole event horizon not a white hole?

"Obviously" the rest of the universe in not a "hole", so what in GR distinguishes a white hole from the area outside a black hole? What is a hole?

I am sure there is a key difference, but what is that?

In the maximally extended Schwarzschild spacetime there are two singularities, one in the past and one in the future. These singularities are local features of the spacetime meaning that you can test if you are local to the singularity using only local information (local tidal forces go to infinity and other nastiness).

The horizons are not local features. You cannot tell from information available locally at the horizon if you are at the horizon. Specifically:

It is an area the observer could never enter. It is an area from which things can only emerge. It is also in the past.

Is local information that is true for any null surface that any observer passes anywhere. 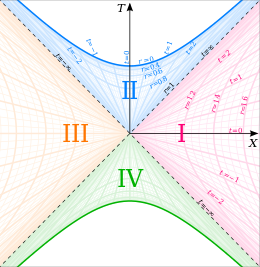 The picture above shows the Kruskal diagram, illustrated for $2GM=1$. The quadrants are the black hole interior (II), the white hole interior (IV) and the two exterior regions (I and III). The dotted 45° lines, which separate these four regions, are the event horizons. The darker hyperbolas which bound the top and bottom of the diagram are the physical singularities. The paler hyperbolas represent contours of the Schwarzschild $r$ coordinate, and the straight lines through the origin represent contours of the Schwarzschild $t$ coordinate.

The two diagrams below serve to understand how the two coördinate systems, $(t,r,\theta ,\phi )$, and $(X,T)$ are related. When, for example, a spherical lightwave (for which $r$ is a constant at any time $t$) is traveling towards the black hole, then you can see these waves as the concentric circles in the first picture (where $(x,y)$ represent $(r,t)$ and the angle refers to a Lorenz transformation, which is not important here). 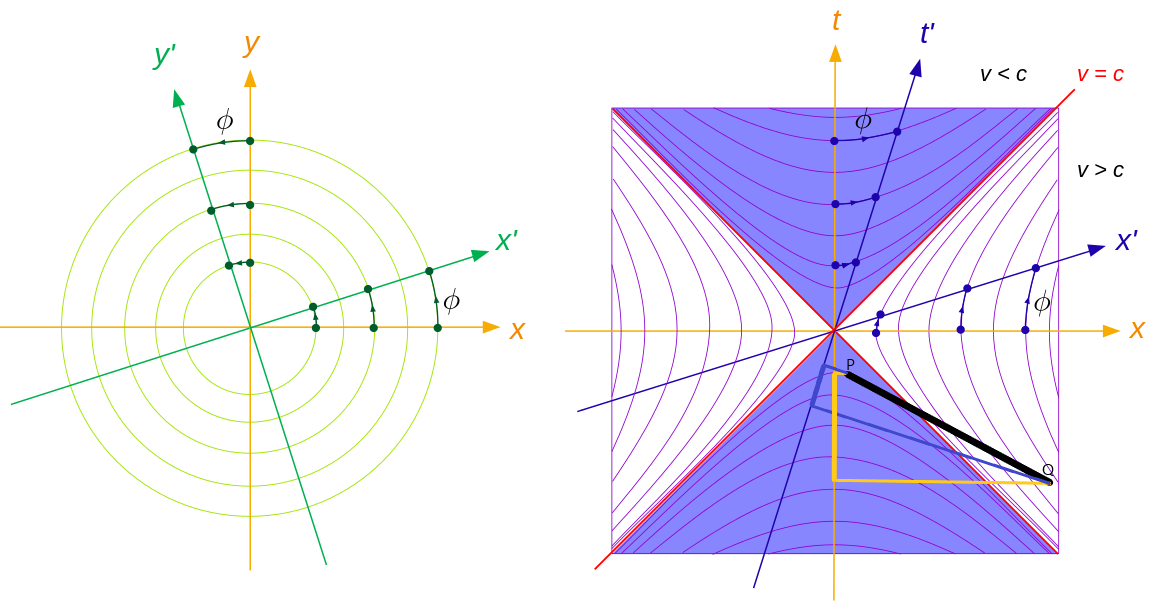 Maybe this gives you an idea.

There are no known physical circumstances that can lead to the existence of white holes. They are purely hypothetical (due to the math). Though Smolin says that they actually exist on the other side of black holes. The other side gives rise to other universes Smolin thinks some kind of a Natural selection "procedure" is happening. Likewise, he thinks that our big bang is similar to a white hole spitting out our universe, and as such there was a white hole geometry before the big bang. I'm not sure I understand this. Can time run backward?

3
For an object that has fallen into a black hole, does the event horizon they went thru look like a white hole?

7
The arrow of time and the cosmology of a black hole interior
2
Disintegrating as you enter a large black hole, instead of experiencing what's inside?
2
How can an observer reach the singularity if black hole interiors grow forever?
0
How would an outside observer see a moving black hole?
3
For an object that has fallen into a black hole, does the event horizon they went thru look like a white hole?