Centripetal and centrifugal acceleration in an athletics raceway (for example)

Addendum: I add any image for clarifications by the comments. 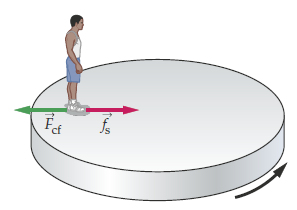 Comment for the picture: An observer on a rotating platform rotation feels a force that pushes it outward and, to remain stationary, it must exploit the friction with the floor. Since the weight force and the normal reaction of the floor cancel each other out, the only real force on the observer is the static friction force $\mathbf{f}_s$, which acts as centripetal force. We must then suppose that in the reference system of the platform another force appears, the centrifugal force $\mathbf{F}_{\text{cf}}$, which has the same intensity and the same direction as the centripetal centripetal force, but opposite direction. 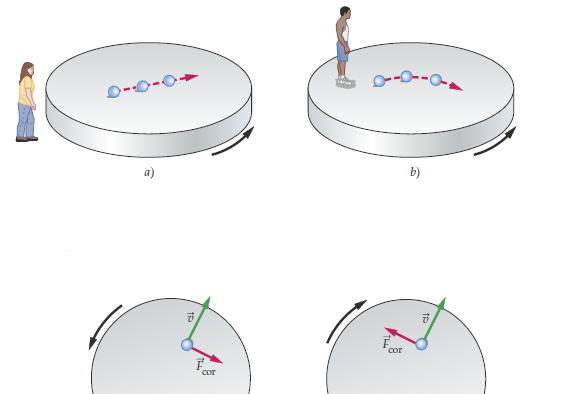 In an inertial frame, the centripetal force is simply the component of the net force directed to the center of rotation.

Consider the classic string with a mass attached at the end. Assume no gravity, such that the only force acting on the mass is the tension $T$. Now if the mass is to undergo circular motion in a perfect circle of fixed radius $r$, you know that the net force directed inwards (i.e. centripetal force) is $$F_C = \dfrac{mv^2}r$$

Now imagine this object rotating and you cut the string. I made an animation here: https://www.desmos.com/calculator/s8roerbvub. At first, the object is flying radially outwards. This is simply due to the object's inertia -- it continues moving with its given velocity.

Imagine you're in a car. You take a sharp left. Approximate the turn as perfectly circular. Even though you end up turning left, your body feels as though it "wants" to go right, outwards. After all, if you're leaned against the door, you will feel the door exert a force on you. The force would be the normal force, providing the necessary centripetal force to keep going in that circle (also friction, but we can ignore that for this purpose). The conclusion is that $F_C = N$

Another way to look at it is thinking of the centrifugal force as a real force, but acting on the ground, not on the runner. It is part of the horizontal component of the force that the runner does on the track. The ground reacts with a centripetal force on the runner, since there is enough friction between shoes and track.

The centrifugal force is the result of the latter option: it is a pseudo-force that has no "equal but opposite reaction".

And finally, the tangential component of the force is not the centrifugal force; it is a real component just like the centripetal force is.

Not the answer you're looking for? Browse other questions tagged newtonian-mechanics reference-frames acceleration centripetal-force centrifugal-force or ask your own question.

0
Centripetal and Centrifugal acceleration/force
0
How does friction allow bodies to rotate on merry go round?