Tension and force equilibrium analyzed via Newton's laws of motion

I was recently solving my workheets to apply basic concepts of Newtonian mechanics. I came came across the following problem. 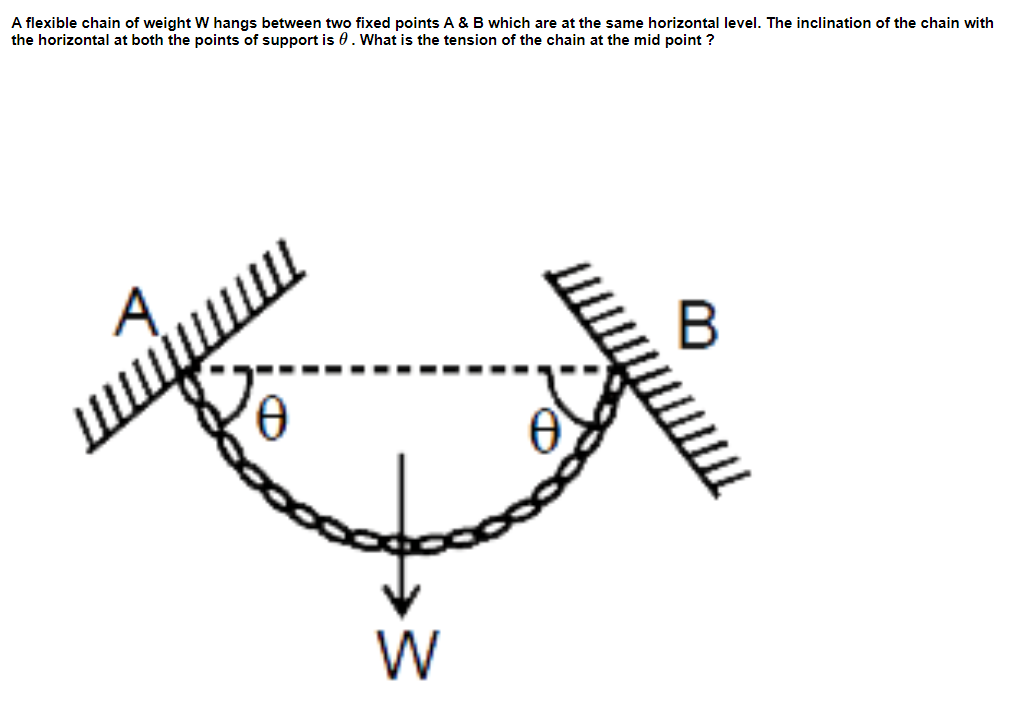 The above is under equilibrium. The solution the book gave me was as follows. 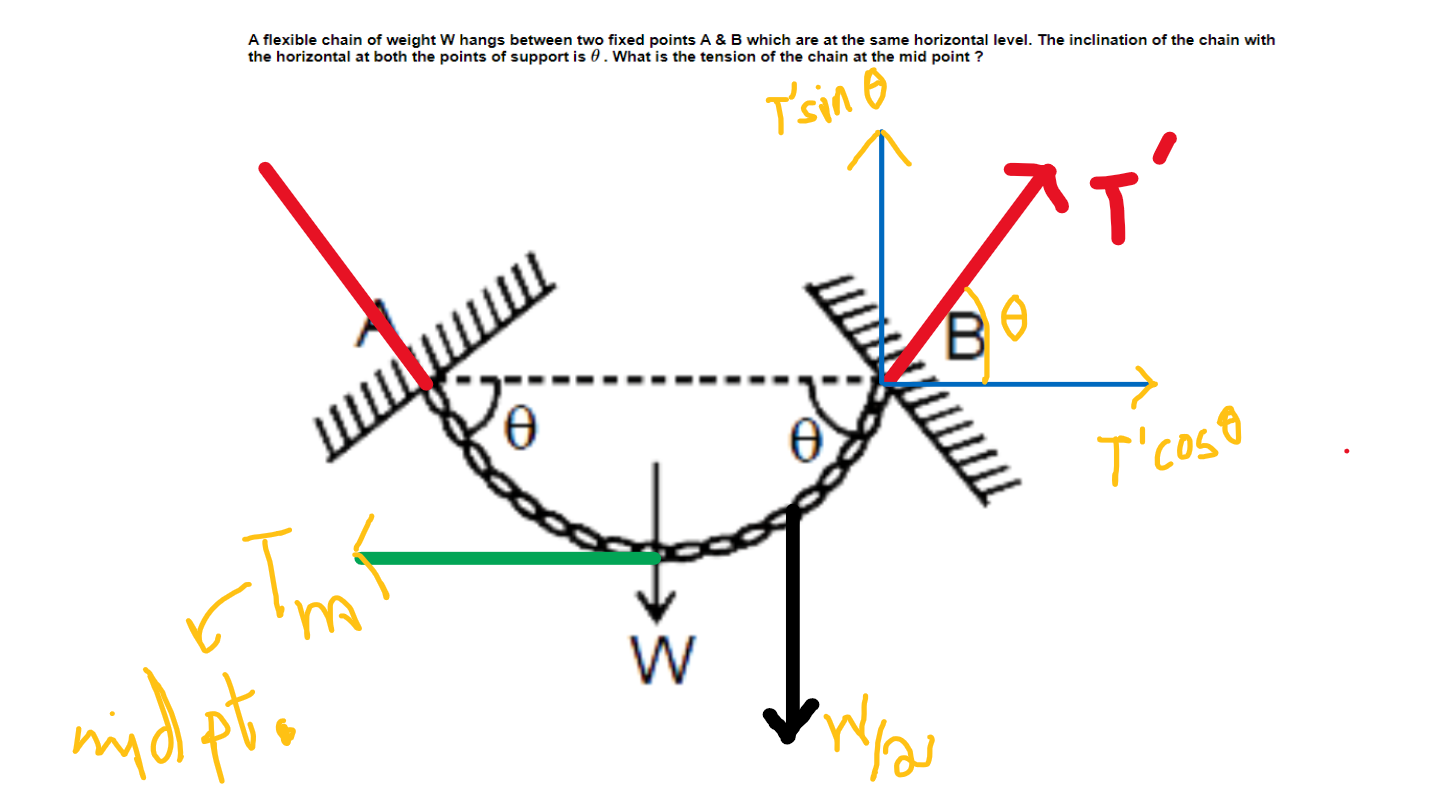 Please correct me wherever I am wrong.

It says that *T' cos theta = Tm for Horizontal equilibrium * and T'sin theta = w/2 for vertical equilibrium I mean this is gross. How can force at different parts of bodies keep it in equilibrium.For the horizontal equilibrium why do they simply cancel each other out. Why don't they give some torque to the part? Please correct me wherever I am wrong. thank you.

Consider the section of rope from $B$ to the midpoint, if we say the weight of rope till there is $ \frac{m}{2}$ then force balance gives:

How can force at different parts of bodies keep it in equilibrium.

This is an interesting point to think of, consider one person pulls your right hand and another person comes and pulls on your left hand. The forces are at different positions but ultimately if both pulls are equal in magnitude , then you will not move.

Why don't they give some torque to the part?

If the net force is zero, then it doesn't matter where you take torque around, they will all give same answer. Try taking the torques around the COM (here it is some point above the mid point I think) , you will find that by symmetry the torques caused by each mass element is zero. This is analogous to how it works for pulleys.

How can force at different parts of bodies keep it in equilibrium?

For the horizontal equilibrium why do they simply cancel each other out?

Total force $=M a_{cm}$ for an arbitrary collection of particles as I argued. So suppose you choose your arbitrary collection of particles to be only half of the hanging string. The symmetric half if you know what I mean. Then the sum of the forces is $T' \cos \theta - T_m$. All the other forces are internal forces and they come in equal and opposite pairs due to Newton's third law so they cancel out. Because the system is in equilibrium $a_{cm} = 0$ and so $T' \cos \theta = T_m$.

Why don't they give some torque to the part?

A mechanical system being in equilibrium doesn't mean that only the net force on it is zero. It also means that the net torque with respect to any origin is zero. One does not imply the other. That's what we mean when we say equilibrium in Newtonian mechanics. Another way of saying this is that an object in mechanical equilibrium should not have any translational or rotational kinetic energy. Nothing should be moving. Because of this definition, by imposing that the chain is in equilibrium, the shape of the chain has to be such that when you take the symmetric half of the chain or any portion of the chain, the net torque with respect to any origin on it is zero. 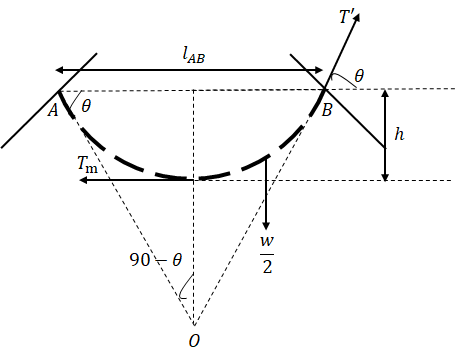 The analysis presented in the solution to the problem is accurate.

Force based statics Let us analyze the statics of the chain from a translational viewpoint. If we consider the chain to be split into two parts and focus on the right hand side (RHS) part then the free body diagram of the RHS part of the chain would have the forces $\vec{T}'$, $T_m$ and $\frac{\vec{w}}{2}$ acted on it by the wall at point $B$, left hand side (LHS) part of the chain and gravity respectively. The directions of these force vectors are easy to mathematically deduce using physical intuition. Resolving them into horizontal and vertical components leads to the conclusion that $T' \cos \theta = T_m$ and $T' \sin \theta = \frac{w}{2}$.

Torque based statics Let us analyze the statics of the chain from a rotational viewpoint. Let us calculate the torque acted by forces acting on the chain referred to the the stationary point $A$ of the chain. Indeed we can proceed by referring torques to the point $B$ as well, but the analysis would be a mirror image of the elaboration which follows. We denote the displacement vector of a point $P_2$ w.r.t. the point $P_1$ by $\vec{s}_{P_2 P_1}$, the lowest point of the chain by $m$ and the force vectors with directions shown in the figure by vector symbols corresponding to their magnitudes. Since the chain is static, the sum of the torques $$\vec{s}_{BA}\times \vec{T'} + \vec{s}_{mA}\times\vec{w}$$ (we assume that torques with the direction out of the screen are positive and into the screen are negative) acting on it must vanish. The scalar version of the sum of cross products equated to zero then reads $$0 = l_{AB} T' \sin \theta - \frac{l_{AB}}{2} w$$ which implies that $$T' \sin \theta = \frac{w}{2}$$ where $l_{AB}$ is the length of the segment between the points $A$ and $B$. Hence forth, it is possible but difficult to obtain the relationship between $T'$ and $T_m$ by analyzing torques referred to a point other than $A$ (restricting ourselves to torque analysis, we have already obtained all information possible by using point $A$ as the reference), which however, is simple when using forces for analysis. Further, note that the obtained relationship can be derived by referring the torques to almost any point in the plane of the chain. However, the point $A$ (or $B$) is convenient since the position vectors of the relevant points at which forces act on the system, namely $m$ and $B$ in this case, are readily available. Furthermore, the point $m$ for instance, is a bad choice for this part of the analysis although position vectors of forces w.r.t. it are known, since the torque due to the weight which is the only known magnitude of force will be vanishing in that case.

Newtonian vs Lagrangian The analysis above, whether using forces or torques for analysis, is based entirely on results obtained from the application of Newton's laws of motion to a system of particles (the chain in this case). The alternative approach is to use the D'Alembert principle which is the principle underlying the variational approach to dynamics comprised mainly by the literature on Lagrangian and Hamiltonian mechanics.

Not the answer you're looking for? Browse other questions tagged newtonian-mechanics forces newtonian-gravity free-body-diagram equilibrium or ask your own question.

0
Figuring out the force using Newton's 2nd Law
0
Find the tension and angle from a vertical of a rope hooked up to an object
3
Why are some forces not included in the sum of forces?
1
Frictional force on an inclined plane with applied force = Mgsinx - Mgcos x?
1
Coefficient of friction between inclined plane and ground
1
Evaluating sum of torques for different choices of origin when solving equilibrium problem
1
Newton's Laws of Motion, Pulleys, Rope and tension
0
Why isn't this rod in neutral equilibrium?
1
Friction and Newton's Laws of motion