Invariance of the spacetime interval in special relativity

All observers agree on what constitutes the past, the future, and elsewhere of a given event because the interval is invariant.

My question is: how are these two ideas related? 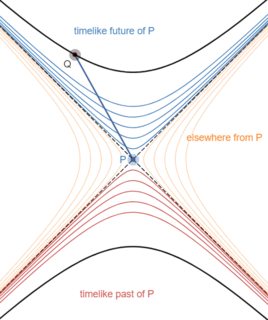 Under a boost, the events $P$ and $Q$ and $P$'s hyperbolas of constant-square-interval are transformed in such a way that $Q$ is on the same hyperbola centered at $P$, although the slope of $PQ$ is different.

The boost can be visualized by the following photoshop steps: 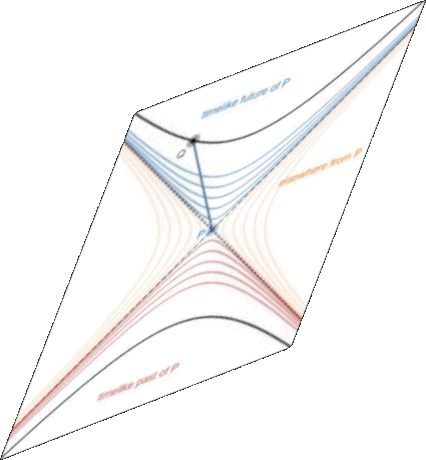 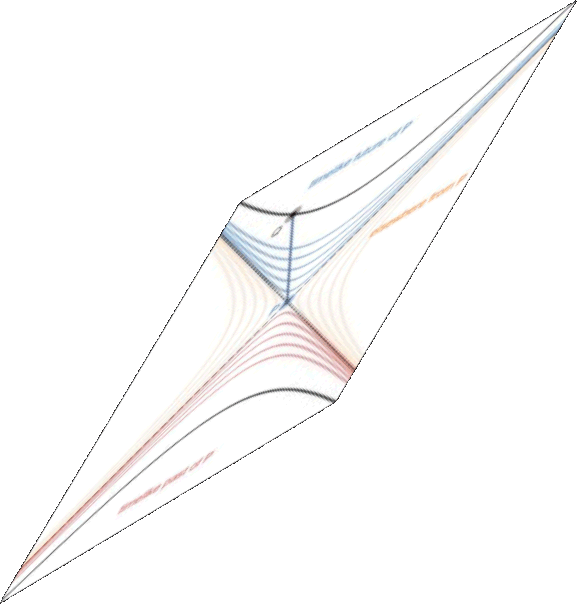 This k-factor is the Doppler factor $$k=\sqrt{\frac{1+V}{1-V}}$$ and is featured in Bondi's k-calculus approach to special relativity (Relativity and Common Sense"). The k-factor and its reciprocal are eigenvalues of the lorentz boost transformation, where the eigenvectors are along the lightcone. The boost preserves the area, as expected since the determinant of the boost is 1.

Past, present and future in special relativity are separated by the light cone.

Past and future are inside the light cone, which is what is called a timelike distance apart, or $$\Delta t^2-\Delta x^2 > 0$$ Past is characterized by $\Delta t < 0$, future by $\Delta t>0$. The inside of the light cone represents all events that might have a causal relationship with each other.

The present (or "elsewhere") is the outside of the light cone, which is what is called a spacelike distance apart, or $$\Delta t^2-\Delta x^2 < 0$$ This set represents events that can never ever have any mutual (direct) causal relationship with each other. They just happen independently (which does of course not exclude the possibility, that they are both caused by a common event in the intersection of their past light cones).

The fact that all observers agree upon what is past, present or future is related to the fact, that the relativistic world distance $\Delta t^2-\Delta x^2$ is unaffected by Lorentz transforms, ie. it is the same in all inertial systems.

The mathematical properties of Lorentz transforms have some things in common with rotations in 3D. However, while rotations map a sphere (a set of all points with the same euclidean distance from the center) into itself, Lorentz transforms (or more precisely a subset of Lorentz transforms, called "boosts", which describe two inertial systems differing only by relative velocity) map hyperboloids (a set of all points with the same relativistic world distance from "now and here") into themselves. These hyperboloids are located either inside or outside the light cone (depending on the relativistic distance), but they never intersect it. That is why past stays past, present stays present and future stays future in special relativity.

Note that the interpretation of present in special relativity is not a statement about the sequence of events, as it is in classical physics. Instead, what is happening after another event in one inertial frame, can be happening before the other event in a different frame. This is uncritical because events over spacelike distances have no causal relationship, so their sequence is irrelevant with respect to causality.

The squared interval from some fixed event P to other events in spacetime is zero on the light cone. The light cone cuts the rest of spacetime up into the three regions described by Schutz. At the light cone, the interval changes sign.

Not the answer you're looking for? Browse other questions tagged special-relativity metric-tensor inertial-frames causality or ask your own question.

4
Schutz's geometrical proof that spacetime interval is invariant
2
Deriving invariance of interval
11
How one uses the definition of observers in General Relativity?
0
Difficulty in understanding the three classes of events of light-cone
0
What is the physical interpretation of the equation for the invariant interval in general relativity?
4
What does this spacetime diagram mean?