Im currently studying thermodynamics in a contact geometric context and I've stumbled upon a comprehension problem on my side. We have the equilibrium connection $\Gamma_p$, which generates the horizontal subspace of dimension 2n which is equivalent to the kernel of the gibbs contact form $\eta$, which encodes the first law of thermodynamics.
We also know that the kernel of $\eta$ gives us the n dimensional legendre manifolds. They are only n dimensional, because of the non integrability condition of the contact form. So my problem is how do these 2 things agree, since both are the kernel yet somehow have a different dimension.

Something that could help with answering this question is the fact, that the distribution $D$ is also defined via the contact form with $D_p= \{X=T_pM \ |\ \eta(X)=0\}$, where $M$ is the 2n+1 dimensional contact manifold, but I'm not quite sure, if it actually helps solving the problem

Below you can find the text passages im referring to, they were taken from the article "Conformal Gauge Transformations in Thermodynamics".

So where exactly does my comprehension fail or did I simply not consider a certain aspect of the construct?

EDIT: A conclusion i came to so far is, that the legendre submanifolds needs to be a maximal integral submanifold, while the kernel of $\eta$ is indeed 2n dimensional and we basically have that the legendre submanifold is a subspace of the horizontal subspace.
I am not exactly sure about this conclusion since, to have an integral submanifold, the distribution of my space and the embedding of the tangent space of the (legendre) submanifold need to agree. Which means, that i would have an n dimensional distribution at any point, which is obviously wrong, because of the existence of the natural splitting into vertical and horizontal part, where the horizontal part is 2n dimensional

EDIT 2: I found another definition of a Legendrian submanifold which is is the following:

This definition very well supports my claim, that the legendrian submanifold is a subspace of the $ker(\eta)$, which is the complement of the vertical subbundle, described by the reebs vector field 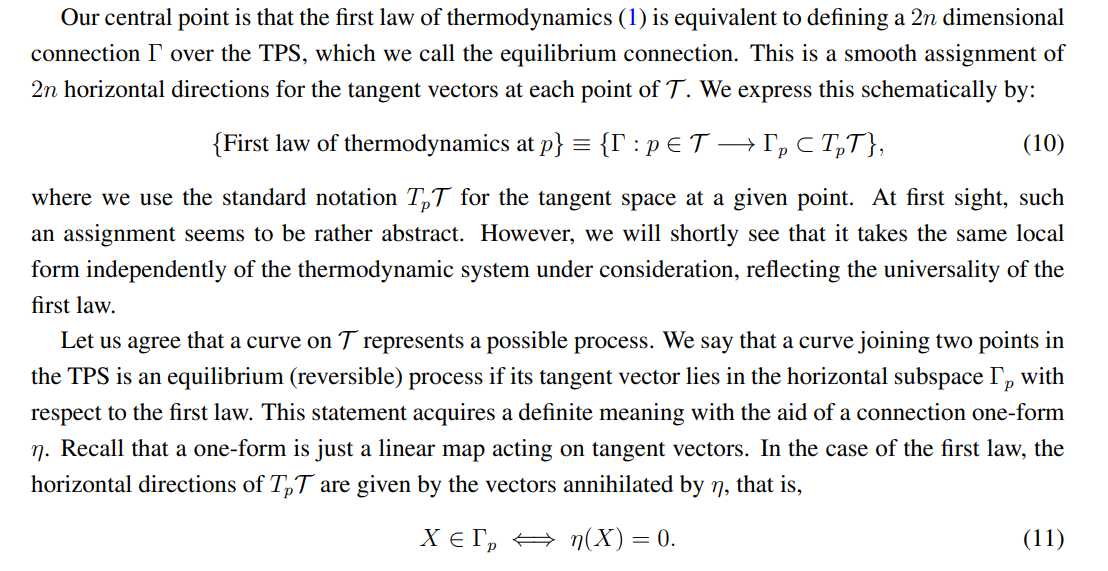 Browse other questions tagged thermodynamics differential-geometry phase-space contact-mechanics or ask your own question.

1
Thermodynamic potentials without unconstrained variables?
2
Meaning of the phase space in statistical physics
0
Phase space and phase line
22
How exactly is the formalism of thermodynamics based on contact geometry?
1
Relationship between $\star$-products in phase-space QM and NC geometry
6
Freshman-level justification for the use of $(x,p)$ in thermodynamic phase space
1
Hamilton equations and phase space
4
The physical meaning of maximal non-integrability of the contact structure
2
Can a null hypersurface be foliated by spacelike sections?