Does time dilation in a constant gravitational field depend on the choice of coordinates?

I am currently taking a course in general relativity and one of the homework problems for the course asks to justify the fact that time dilates in a constant gravitational field using the equivalence principle. Although this might be fairly straightforward to many, this pushed me into questioning everything. My reasoning for this problem goes as follows: We know from the equivalence principle that a constant gravitational field is the same as being accelerated with a proper acceleration '$g$'. So I have tried to use the Rindler coordinate system to describe two observers $A$ and $B$ a certain distance apart in an inertial frame (with coordinates x,t). Although this may be going a little overboard, I just wanted to understand time dilation in its full glory. In the image below, I have shifted the Rindler coordinate system by a constant $a - r_0$ such that an observer with acceleration $1/r_0$ would be located at $a$ when $t=0$. I then derived the coordinates $(r,w)$ in terms of $(x,y)$ and derived the Rindler metric: $ds^2 = dr^2-r^2dw^2$. It is clear that an observer A (with constant acceleration $1/r_0$) will trace out a hyperbola and will experience proper time given by $-ds^2=r_0^2dw^2$. Now, it is possible to relate the proper time and $w$ as follows: $\tau _A/r_0 = w$. So following this, I placed an other observer B that is located a distance $\Delta a$ to the right of Observer A with the same acceleration $1/r_0$. I parameterised the trajectory of Observer B in the $(x,t)$ inertial frame and used the coordinate transformation equations to obtain the trajectory in terms of $(r,w)$ (rindler coordinates of Observer A). Using this, I (if this is correct) derived the relation between the proper times of Observers A and B. 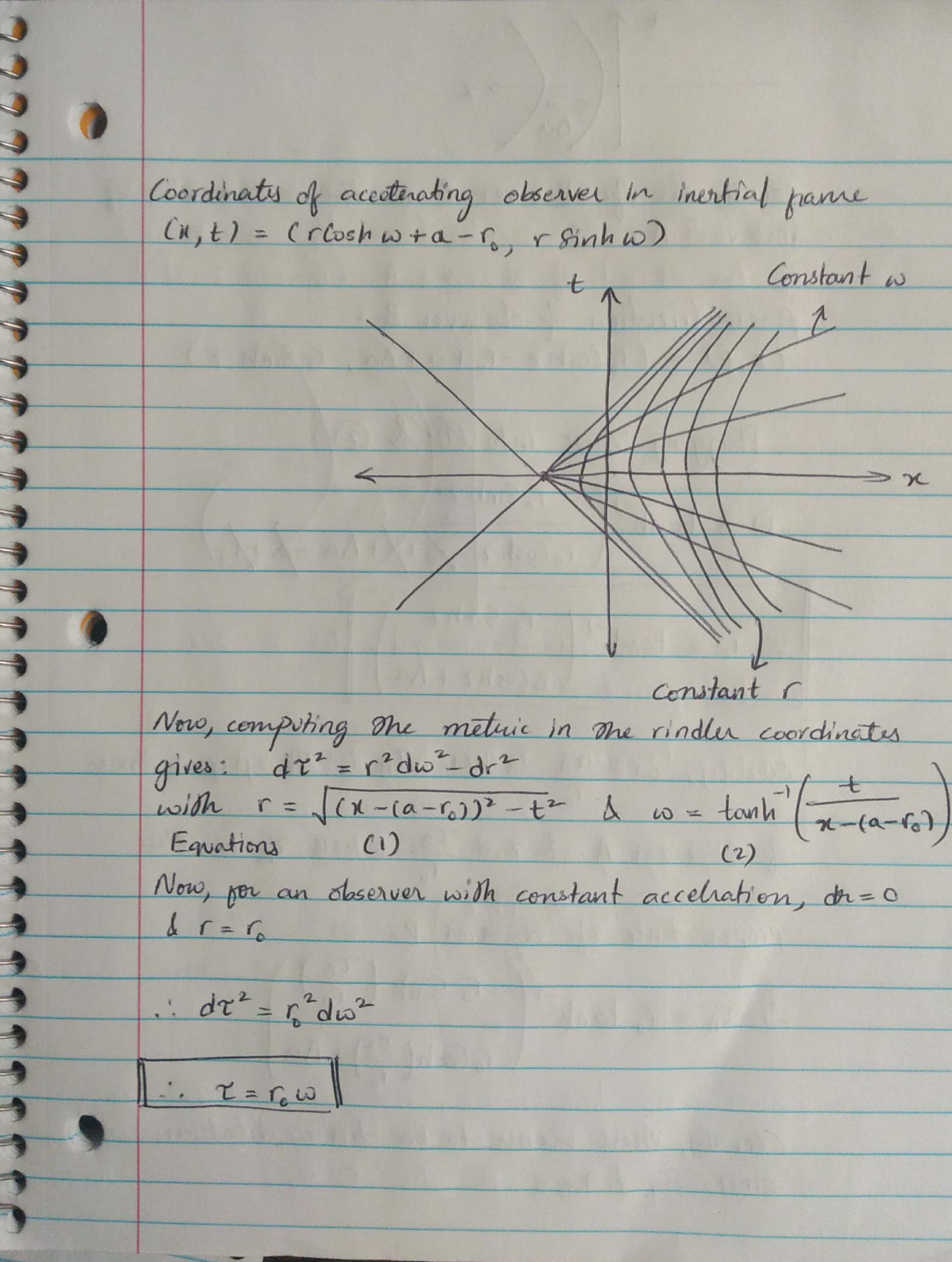 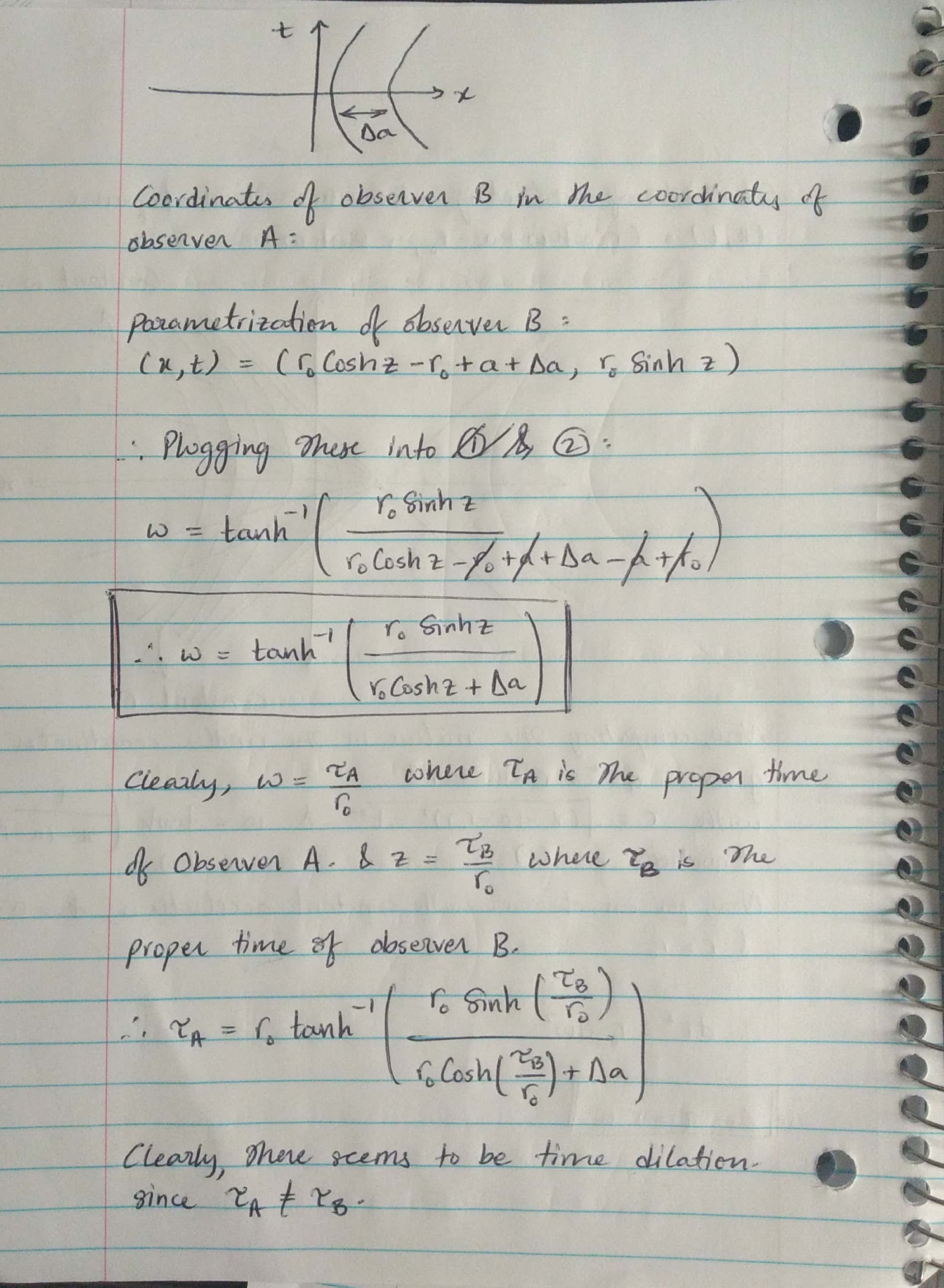 This seems to predict some sort of time dilation between Observers A and B (although it does not quite agree with the time dilation equations I have seen). However, just so I could understand how different coordinates can affect physics, I considered a different coordinate system defined by the following transformation: $(x,t) = (r_0 cosh(w)+r-r_0, r_0 sinh(w))$. This coordinate system corresponds to observers accelerating with the same acceleration $1/r_0$ starting at different points on the x-axis (they start at $x=r$ when $t=0$). Now, I used the same procedure as before to determine the metric and transformation functions. I considered Observer B to be located at a distance $\Delta a$ ahead of Observer A in the inertial frame just like before and tried to relate their proper times. However, this time, I just got $\tau _A = \tau _B $ 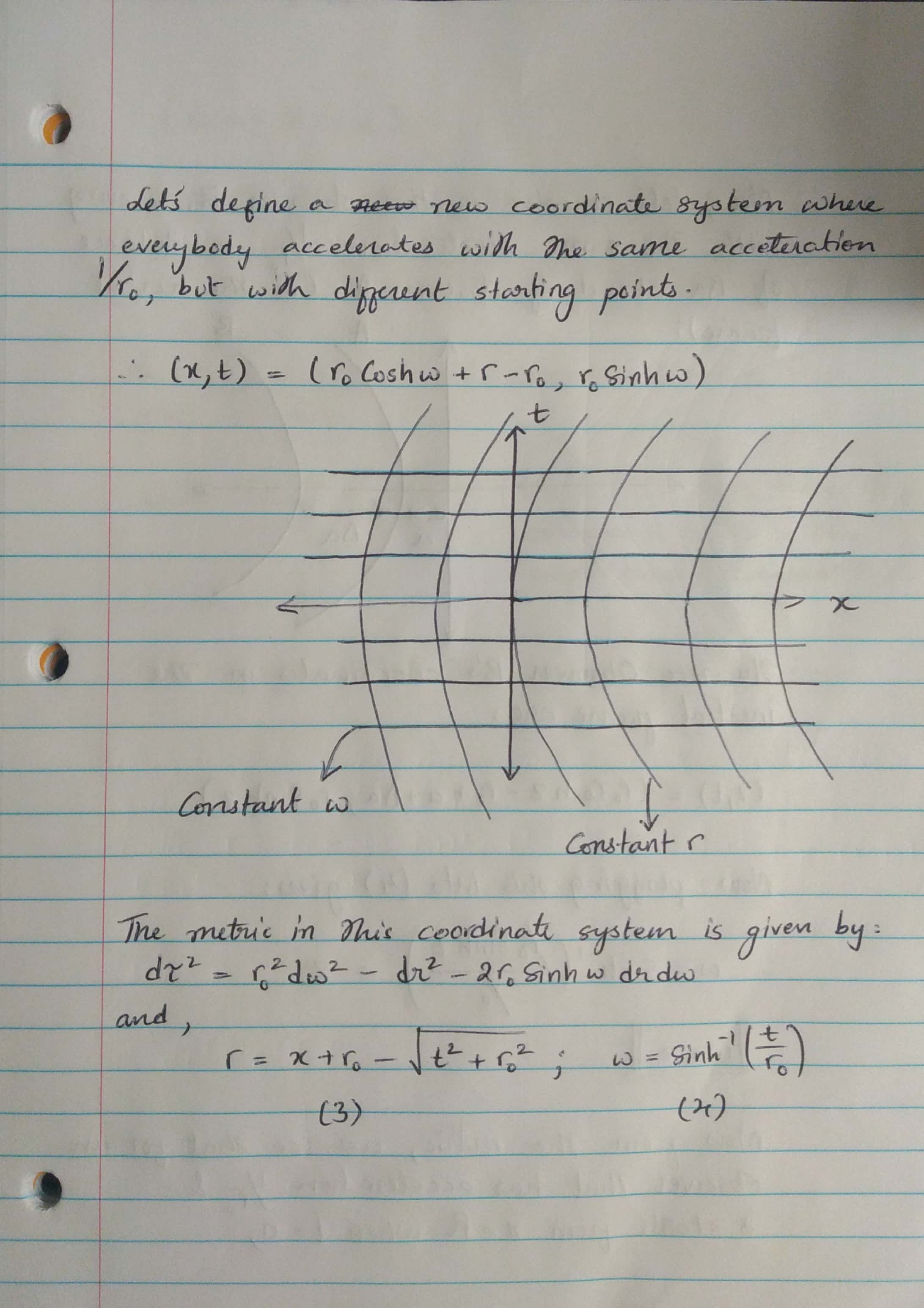 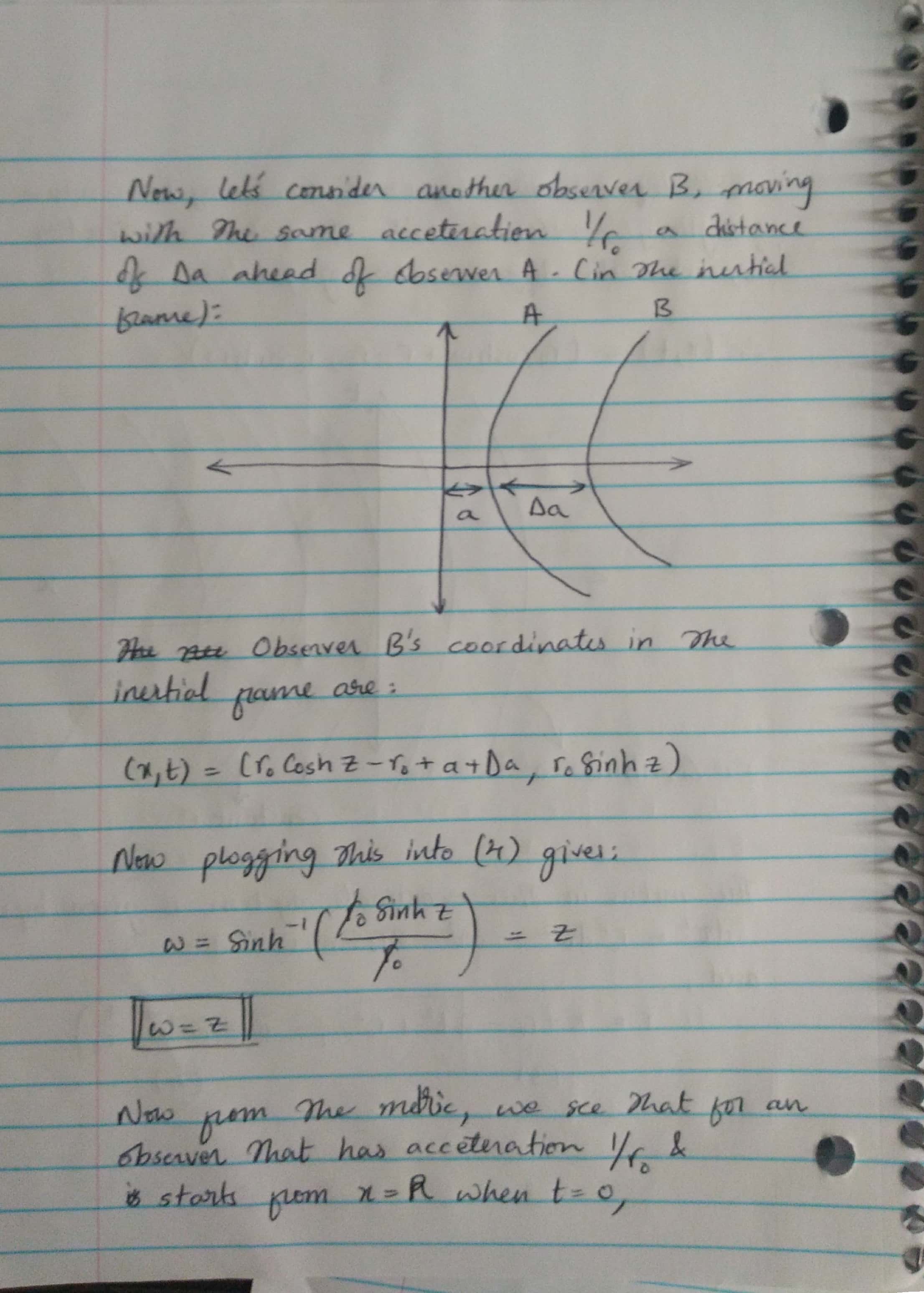 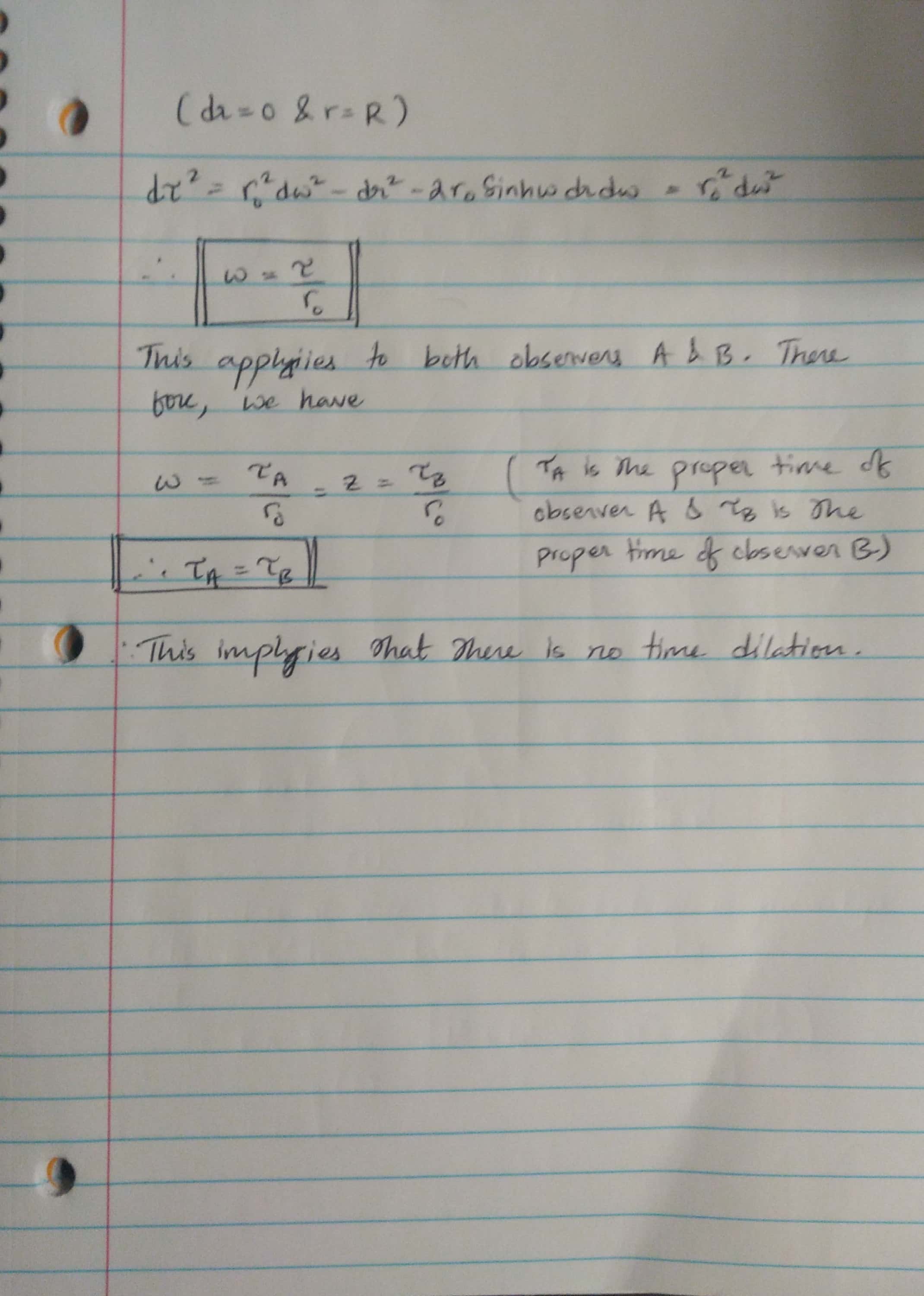 You have gone way overboard here. Once you have derived the Rindler metric you are nearly done.

That is it, all of that extra stuff is not needed.

Not the answer you're looking for? Browse other questions tagged general-relativity spacetime coordinate-systems time-dilation equivalence-principle or ask your own question.

43
Why can't I do this to get infinite energy?
2
About the standard derivation of the gravitational redshift