Confusion in Signs when formulation mathematical equations for physics problems

One of the common confusion I face when writing and solving mathematical equations for physical problems is regarding signs. Consider this problem;

A ball is dropped from rest from top of the building,it falls down subjected to air resistance which is directly proportional to velocity. Find Velocity as function of time?

Let $+y$ be along downward direction

Assuming velocity and acceleration is downwards,writing Newton equation gives;$$mg-c(v)=m(a)$$ where $g$,$m$,$c$ are positive constants. Since this is a scalar equation since $v$ and $a$ are magnitude of the vectors. But mathematically $v$ and $a$ are variables hence can be positive or negative. Since $a={d|v|\over dt}$,the fact that speed is decreasing or increasing will mess up the sign of acceleration.

A ball is dropped from a top of a building at a velocity greater than the terminal velocity,moving under air drag. Find $v(t)$?

Here since the ball is dropped at a velocity greater than the terminal velocity we may expect that the net acceleration is upward and velocity is downward so that it's speed decreases and it obtains terminal speed. By using same coordinate system as above and writing force equation $$mg-c(v)=m(-a)$$ but this equation is wrong in terms of sign( $(-a)$ because acceleration was in upwards direction which is negative).

So how do we deal with the sign of variables in mathematical equations in physics problems?

You first must differentiate between the component and the magnitude of a vector.
A magnitude is always positive, think of it as a length and it does not matter which way (left to right or right to left) you measure the length.
If the component is positive then that is also equal to the magnitude.

$\bf -c\, \vec v$
Why is this term written in such a way?
It is because it has been decided that the frictional force is always in the opposite direction to the velocity.
To make this work the numerical value of $c$ is defined to be positive.
If $\vec v = v\, \hat d$ where $v$ is the component of velocity in the $\hat d$ direction then the term $-c\,\vec v = -c\,v\,\hat y = c\,v\, (-\hat d)$ is in the opposite direction.
Notice this is always true irrespective of the numerical value of $v$.

We must always pick a direction to be positive and stick to it throughout.

A good tip to reduce confusion is to pick the positive direction to be the way you expect the object to accelerate.

After calculating $a$, you'll have your answer. If it comes out positive that's fine, it's in the direction you expected. Occasionally it might come out negative, this means that your initial guess for the direction of the acceleration wasn't right and it's accelerating the other way.

One thing you need to learn in physics is to trust your coordinate system. As long as you define which direction are positive and negative and stick to it, the math works out.

So, you defined down to be $+y$. This is perfectly fine. You defined two forces: gravity ($mg$) and air resistance ($-cv$). This is also correct. One way to check this is to substitute values of the correct sign into each expression to make sure it is the right sign. Let $m=2 \textrm{kg}$ and $g=10 \textrm{m/s^2}$. This results in a gravitational force of $20\textrm{N}$. This is a positive value, which you defined as downwards, which is correct. For air resistance, let $c=20$ (a positive constant) and $v=10\textrm{m/s}$. This results in a force of $-200\textrm{N}$. If positive is downwards, then negative is upwards. Air resistance is always resisting motion, so downward velocity should result in an upward force, which is what we have here. If you put in a negative value for $v$, you get a positive air resistance force, which would point down as it should.

Finally, you used Newton's second law to find the acceleration: $\Sigma F = mg - cv = ma$. If the magnitude of the gravitational force is greater than the air resistance force, the acceleration is positive (meaning downward). If the air resistance force is the greater magnitude, then the total force will be negative (meaning upward). You did this correctly.

So far, so good. Where you go wrong is thinking you need to change the equation to work on a different starting velocity. The equation you came up with $$mg - cv = ma$$ works for all situations, no matter the starting velocity. The variables $v$ and $a$ will take on their appropriate signs when you plug in starting values that have consistent with your coordinate system definition. Even if you want to solve a problem where the ball is thrown up, you don't need a new equation. You just need to make sure that the sign of the initial velocity is negative, since positive means down.

Once you define down as positive displacement, you also define downwards as the direction of positive velocity and positive acceleration. Just be consistent, and the math will work out. 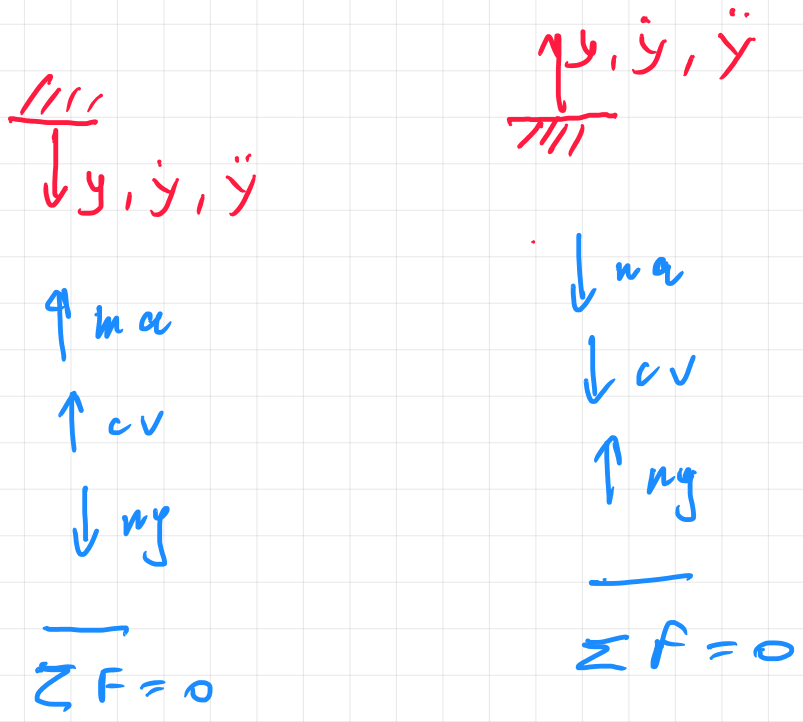 you can choose arbitrary the positive y coordinate left or right diagram.

now you can sum all the forces equal zero, again i choose $m\,a$ force plus.

Not the answer you're looking for? Browse other questions tagged newtonian-mechanics forces coordinate-systems conventions drag or ask your own question.

9
Physics Paradox about Newtons Second Law $F=ma$
2
Limitations of drag equation
0
How do I correctly choose signs for a falling particle?
0
"Simple" air resistance question
1
Confusion about signs in this kinematics question?
1
How should the sign of acceleration be chosen when I apply Newton's second Law
0
Vertical motion with linear drag axis problem
1
Motion of ball (air viscosity concerned)