Ask Question
Asked 4 months ago
Active 4 months ago
Viewed 49 times
0
$\begingroup$
Homework-like questions and check-my-work questions are considered off-topic here, particularly when asking about specific computations instead of underlying physics concepts. Homework questions can be on-topic when they are useful to a broader audience. Note that answers to homework questions with complete solutions may be deleted!

I am requesting a clarification to the solution of a question posed in my Physics 1 course.

Calculate the force acting on an astronaut with mass $m$ in a rocket that is starting on earth's surface with acceleration $a$.

The solution provided to this question states that the force is equal to $-m(g(r)+a)$, which makes sense to me. The next question then asks for the force after the rocket stopped its engine (so that $a=0$) (the flight occurs purely in the radial direction so it does not orbit the planet).

The solution to this second question then states that the inertial force on the astronaut is $0$, but given the equation from the first part there should still be a force equal to $-m(g(r)+0) = -m g(r)$ (since $a=0$, but $g(r)$ still acts on the ship).

Is the provided solution wrong or am I overseeing something? 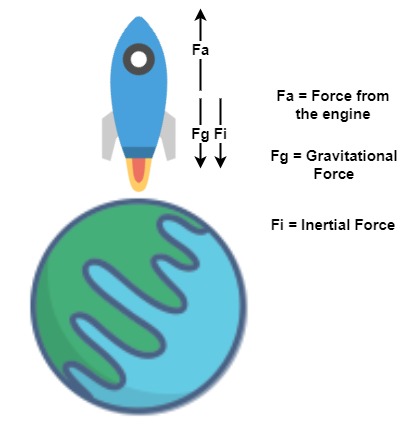 Not the answer you're looking for? Browse other questions tagged newtonian-mechanics forces inertial-frames free-body-diagram rocket-science or ask your own question.

0
Rocket with Drag force, Exam Question
0
Why is time $1\ \mathrm{s}$? Is this a default?
0
Question about the Normal Force exerted by Planet Earth in relation to centripetal force
41
When you hit a baseball, does the ball ever travel faster than the bat?
3
Rocket Leaving Earth's Gravitational Field
48
Can you exit the event horizon with a rocket?