Cosmology - an expansion of all length scales

From the link Is non-mainstream physics appropriate for this site?

"a question that proposes a new concept or paradigm, but asks for evaluation of that concept within the framework of current (mainstream) physics is OK."

Here is a concept, evaluation within the framework of current (mainstream) physics would be welcome.

Is it possible that an expansion of all length scales can be happening, as in the cartoon below? 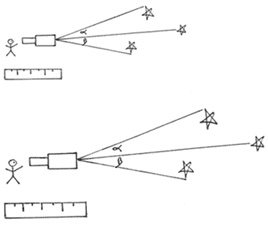 It shows all lengths increasing, the size of atoms, people, stars and the distances between all objects. Each physical quantity and constant varies depending on the number of length dimensions in it. For example since Planck's constant has a length dimension of 2, so it's change with time is

where $H$ is an expansion constant and $t$ is time.

Can this type of expansion be ruled out A) locally or B) by distant measurements e.g. of distant stars or galaxies, from within mainstream physics?

The expansion referred to occurs for the whole universe. It's proposed as there could be another reason for the redshift of light from distant stars. If the energy of a photon is conserved during flight, but was emitted when Planck's constant was lower, then from $E=hf$, the frequency of the received photon would be lower and the light from a distant star would be redshifted.

A bounty has now been added. A convincing reason why the above type of expansion cannot be occurring would be welcome.

Here is the work done so far.

It is to determine the apparent matter density that would be concluded in a flat universe, with a matter density of $1.0$ and the type of expansion above.

It leads to the conclusion that the matter density would be measured to be $0.25$ or $0.33$ from galaxy clusters and supernovae data respectively. A Diagram of supernovae data is below and then more details of the calculations. 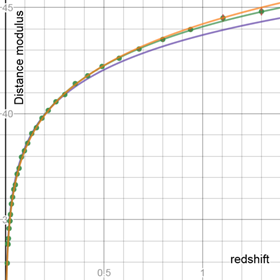 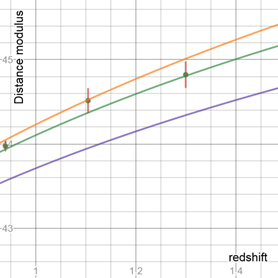 The diagrams show the distance modulus predicited by the type of expansion in the question, top curve. Concordance cosmology with a matter density of 0.3 and 1.0 are the middle and bottom curve respectively. The second diagram is an enlargement of the first.

Traditionally the scale factor of the universe at redshift $z$ is

For an emitted wavelength of $\lambda_1$

($a$ decreases with increasing $z$ in an expanding universe) so

i.e. Hubble’s law is still valid but we identify the expansion parameter $H$ with half of Hubble’s constant $H_0$

this leads to the conclusion that the matter density will be measured to be $\frac{1}{4}$ of the true value, as follows.

In LCDM the Hubble parameter is

The comoving distance is obtained from

Using a flat universe approximation, omitting $\frac{c}{H_0}$ and using $m$ for $\Omega_m$ ,the comoving distance, for small $z$ is

For the type of expansion that we hope to rule out,

The co-moving distance is

So we conclude from Galaxy and supernovae data, or combinations of data sets, that the matter density would be measured, with the type of expansion in the question, at between $0.25$ and $0.33$. As it is measured at this value, it's concluded that the expansion cannot be ruled out this way. A diagram with supernovae data is above.

Is there a convincing reason why the expansion described should be ruled out?

Mainstream physics/cosmology says that local systems that are held together e.g. by gravity or electromagnetic forces do not take part in the global expansion. Our solar system had the same size billions of years ago (there is certainly no evidence to the contrary) and atoms in galaxies billions of light years (in space and time) away have the same size as those locally (as one can conclude from the spectra of distant objects).

Anyway, if your ruler expands as well (like you have drawn above) there would not be an expansion of the universe in the first place, as you would always measure the same distance to a galaxy.

the frequency of the received photon would be lower

Why would it ? Since $c=\lambda f$ and $c$ and $\lambda$ change in the same proportion then $f$ is constant. All you are doing is changing the units in which length is measured. You get exactly the same effect if you measure the wavelength in furlongs instead of metres, and denominate the speed of light in furlongs per second - frequency remains unchanged.

I ll just simply write couple of reasons why its not possible.

If all things expand, atoms become bigger. Bigger atoms have at least different electromagnetic spectra. Hence, if we look at the hydrogen lines from the andromeda galaxy, we see them like they were 2.5 million years ago, and that would mean, emitted by much smaller atoms. The energy levels of the hydrogen atom are proportional to the reciprocal of the Bohr radius $a_0$ and if this was smaller in the past, that means higher energy differences, or higher frequencies.

Of course the wavelength of the received light would have been expanded since then, due to the alleged spatial expansion, but their frequency would have stayed the same, because time is not affected by the expansion, as I understand you.

Hence, we should see different atomic spectra for distant objects, namely blue-shifted ones (higher atomic frequencies in the past), which has not been observed, as to my knowledge.

It is hard to write a precise answer because it is not clear to me that the concept being presented is sufficiently worked out to make something one can assess. This may be a failure of understanding on my part, but I hope it will help if I simply give a few reactions so that you can see what a physicist with reasonable general knowledge of this area makes of this (but I am not a cosmologist).

The above reveals one difficulty I have with the whole approach. It is not clear to me that it can hang together overall. When we detect the light from distant supernovae, the instruments to measure red shift use, I think, optical methods such as diffraction gratings and Michelson interferometers, so it is wavelength not frequency that they are measuring. But when they detect luminosity then it is, I think, more like an energy measurement. Meanwhile, when we do stellar physics calculations to describe the supernovae (or other stars) we adopt the standard methods and mostly think in terms of energy and frequency. So if frequency and wavelength are scaling differently as cosmological time goes on, we don't have, at the outset, any idea of which of our calculations to trust, or which aspect of them, until a lot more working out has been done. And the suspicion is that that working-out cannot be done because it won't in fact hang together as a logical whole. I am not being so bold as to assert that; I am simply giving a response which signals some of the issues which need to be addressed before the ideas can be taken forward.

Not the answer you're looking for? Browse other questions tagged cosmology space-expansion cosmological-constant redshift or ask your own question.

35
Is it possible to speak about changes in a physical constant which is not dimensionless?
14
Could Planck's constant be changing?
13
Do we have theories about why gravity exists/how it works?
4
What is the physical meaning and origin of the gravitational constant $G$?
3
Does General Relativity allow a reduction in the strength of gravity?
1
How does the universe preserve distance?
2
Dilaton field causes universe expansion?
1
Is the "expansion of space" limited to intersteller space only?
2
Why is the flatness problem a problem?
0
If the universe is expanding, how can constants not change?
See more linked questions

2
Cosmology: proper evolution of energy density ratios with time?
13
FLRW cosmology with a scalar field: what are the phase-space variables?
1
Acceleration of Universe expansion
0
Cosmology - how to do the $V/V_{max}$ test?
5
Results of WMAP mission
1
Numerically solving for cosmological scale factor in mathematica
1
Where can I find the latest Cosmological Parameters derived from SNe Ia magnitudes?
2
Dilaton field causes universe expansion?