What happens to the non-axial photons of a laser cavity?

In short: The part of the light with small enough deviation from the optical axis is kept in the resonator, the rest leaks out, but is stopped by the housing of the laser.

Which light is kept?

Imagine a ray being tilted with respect to the optical axis.

Because the mirrors in a laser cavity are slightly concave the ray gets deflected more towards the middle of the cavity again and therefore doesn't walk off, as it would be the case with two planar mirrors. In the particular example I've chosen, the mirrors form a confocal cavity, i.e. the radii of curvature of the mirrors $R_1$, $R_2$ are equal to the cavity length $L$. Here, one can geometrically show that said ray will travel in a $8$-shaped loop and be identical to itself after 4 reflections:

This holds for any tilt angle as long as the ray still hits the mirror. So there is a whole class of rays which map onto itself after 4 reflections, not just the axial ray. Similarly, you can imagine what happens to a ray being shifted from the optical axis. Analogously, it will also travel in a $8$-shaped loop, irrespective of its exact displacement. For a mathematical proof using the ray tranfer matrix method see for example Kogelnik & Li, Appl. Opt. 5 (1966).

You can also model the situation with waves. Here, the mode formed in the cavity is given by the criterion that the wavefronts of the beam must match the mirror shape, so that the beam is mapped onto itself after a full round trip.

Of course the confocal cavity is just one possible geometry out of many. Which cavities are stable is summarized in the cavity stability diagram. It describes which cavity shapes allow mapping a ray/beam onto itself in terms of geometric parameters $g_1 = 1 - \frac{L}{R_1}$ and $g_2 = 1 - \frac{L}{R_2}$. 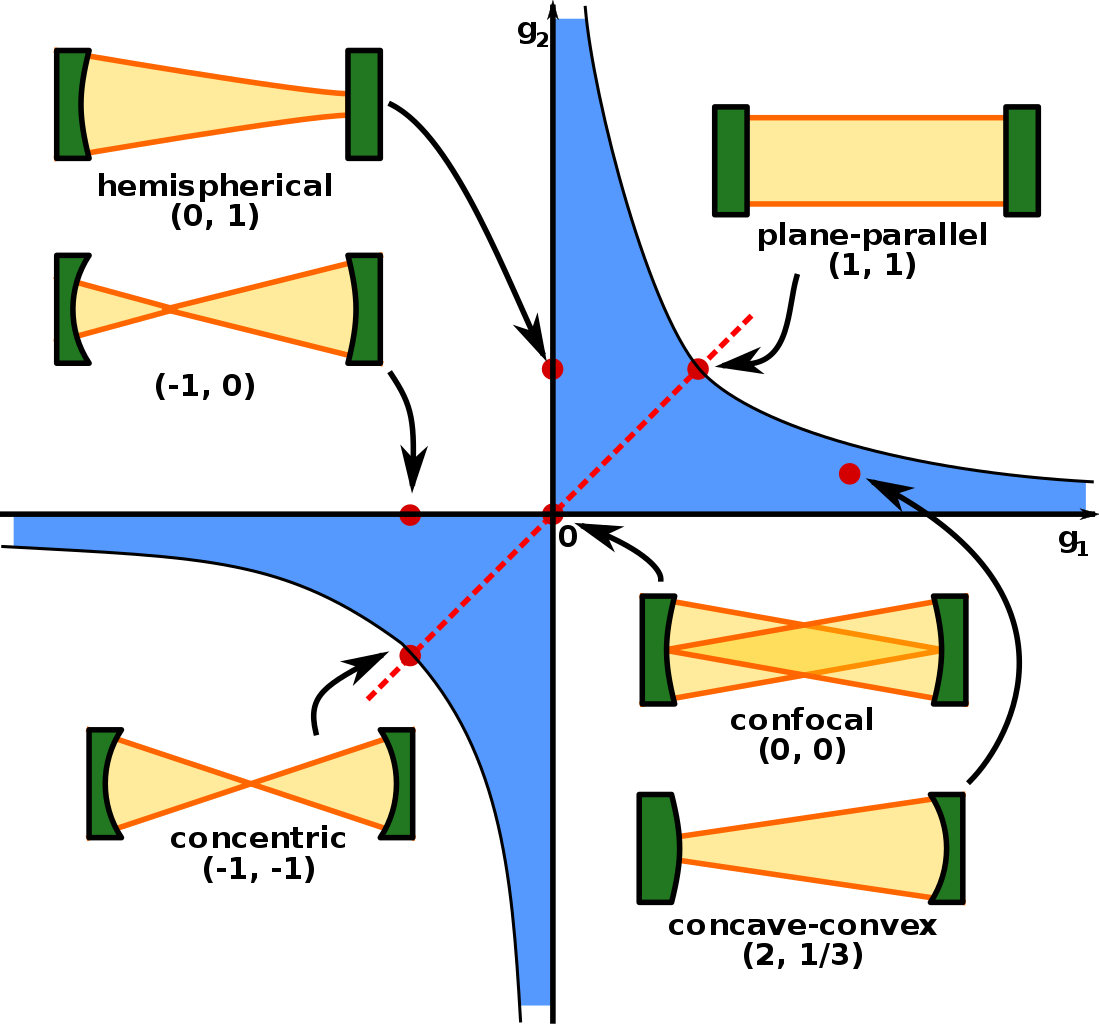 And the light which deviates too much from the optical axis?

Regarding the safety issues, you are right, there is also light which is not kept in the resonator, as shown in the image below. This is why lasers are typically enclosed during normal operation. For alignment one uses low power to minimize the risks. 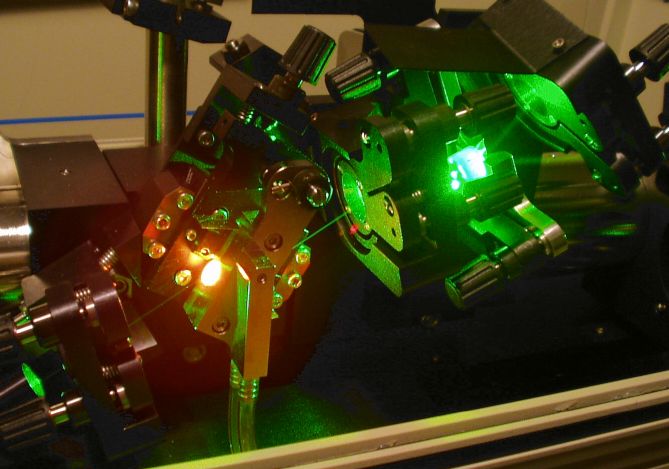 For the most part the intensity of the non-laser emission is not a health issue, but I wouldn't bet on it in all circumstances. I'd be more concerned about UV emission from the glow discharge in the case of gas lasers.

@garyp's answer is excellent and this supplements it.

A short, tl;dr-like answer to your question is roughly: "There aren't that many (non-axial photons), but the ones that do occur go everywhere."

There is spontaneous emission; the metastable excited state can be pumped because it is long lived, but it must couple at least weakly to a photon otherwise lasing wouldn't be possible. The states can also couple to other de-excitation channels, both radiative and non-radiative; in optical crystals that lase there are phonons, defects and impurities, in liquids and solid lasing materials there are collisions, and all of these can also trigger both radiative and non-radiative de-excitation, potentially at around the wavelength of interest or others as well.

So the excited state will have a natural half-life, and as soon as it is populated there will be a slow, exponential decay in this population, and some of that will be spontaneous emission.

What happens to the non-axial photons of a laser cavity?

The bright red glow in the glass tube containing a HeNe laser cavity tube shown below is the photons you are asking about, and the answer is that they shoot off and then get absorbed in something. But it's usually but not always a small fraction of the total amount of light produced and 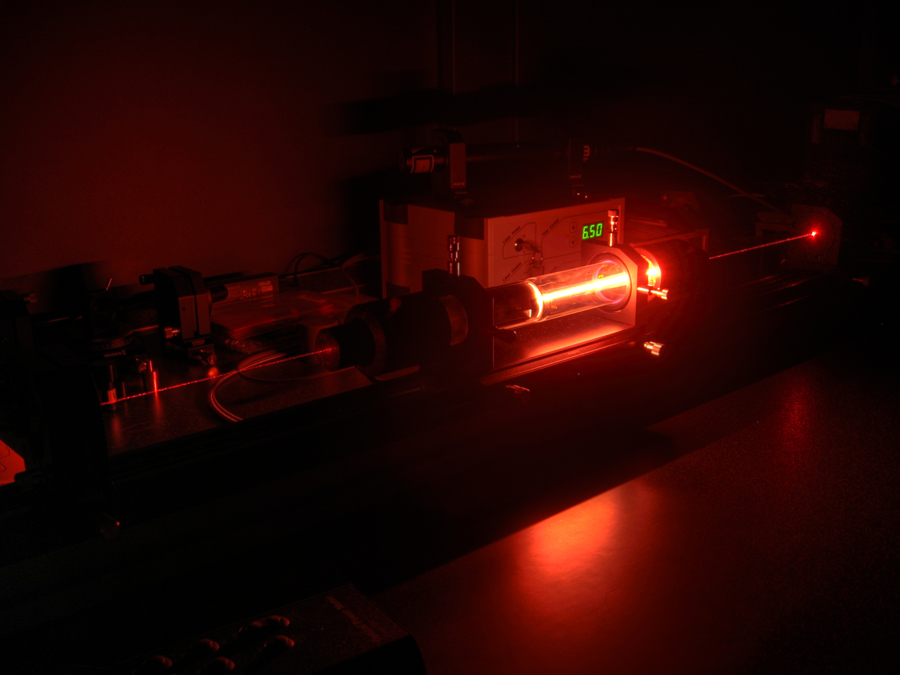 For some laser types where the gain region is not long and thin like a gas laser tube but instead is closer in cross-section to length, there can be strong amplified spontaneous emission or ASE; a photon in a random direction stimulates a second excitation to emit another one in the same direct. Since the spontaneous photons are isotropic, these will be too.

Do these non-axial photons pose a safety risk?

For ordinary visible light lasers, spontaneous emission light is emitted pretty much isotropically so by the time it reaches you it's not concentrated like the primary laser beam would be.

What's a lot more dangerous is accidental reflections of the laser beam itself. It can be off of any smooth surface, it doesn't have to be a perfect mirror to get a high brightness reflected beam into your eye.

Safety requires that you use safety goggles of the correct wavelength for your laser. Particularly dangerous are invisible laser wavelengths in the infrared and ultraviolet that you can never see without special equipment. But even visible laser beams can accidentally reach your eyes. So wear the correct goggles at all times.

Not the answer you're looking for? Browse other questions tagged optics laser photon-emission photonics laser-cavity or ask your own question.

0
How is it that having a laser cavity geometry with one flat mirror and one curved mirror produces a more divergent beam?
0
What is the angular distribution of stimulated emission radiation? Is it zero at 90 degrees?