I have recently found a video claiming the earth is flat that shows a man in a plane above texas who can see the tip of Baja California. The distance between them is about 760 miles and I can't find anything that explains why he can see it. Most calculators do not account for these effects and the ones that do require an extremely high refraction coefficient.

So if someone could explain how the light from a mountain 760 miles away can be seen and how refraction works at high altitudes I would appreciate it.

I looked at that video, and also the original source video.

There's no evidence presented whatsoever, that what we are looking at is Baja California at all. The guy just says so.

So we are left with maybe 4 hypotheses:

My money's on anything but 1.

I made some observaton on google earth and on google maps. I think the answer is that what was recorded was not Baja California, but some mountain nearby with low land covered with dusty air or fog.

The proof is that the highest mountain on the peninsula is about 2 miles and the length of California penisula is 760 miles. The ratio is 1/380. But on the photo the height/length ratio is about 1/50.

It's hard to interpret long-range, high-zoom photography of horizons. For photography away from horizons, you can usually make the assumption that the air column is not very thick and that light travels in straight lines. However, looking along the horizon, you are looking through a maximum-density column of air which probably has temperature and density variations nearly parallel to your line of sight. Weird stuff happens.

For instance, the Fata Morgana mirage can interpose an image of the sky between the image of nearer ground/sea and the image of a more distant tall object: 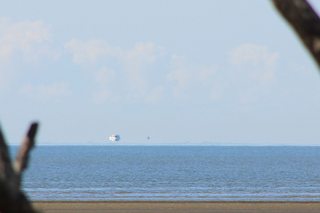 That seems to me the most likely explanation for the sky-colored feature labeled "Gulf of Baja" in your linked video:

Identifying which mountain peaks are visible in the photo would be an interesting project, but would require substantially more information about the location and direction of the filming than is given, and would also require more information about the topography of Texas (and possibly northern Mexico) than I have off the top of my head. I have seen this done with Google Earth and other landmarks. Central Texas is flat, but southwestern Texas is in the northern end of the Sierra Madre Oriental mountain range. Some features that should appear in the foreground, along the claimed line of sight, are the mountains around Fort Davis and the mountains on either side of the Rio Grande; the distance from the claimed location to the Rio Grande is consistent with the video's computed horizon distance of about 230 miles.

In addition to mirages adding layers of fake sky under your distant mountaintops, it is possible to see around Earth's curvature thanks to atmospheric refraction. For a sense of how tough that is, consider this series of photos from a Mediterranean sunset in Marseilles by Alain Origné, 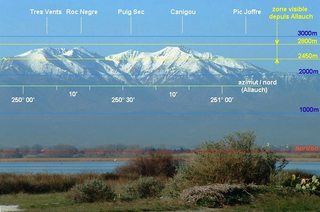 I don't have enough French to get much from Origné's web pages, but there are two nice English-language blurbs at Atmospheric Optics.

There's a lot of mirage effect in this sunset photo, including the green flash above the sun and a little hint of Fata Morgana appearing as a horizontal line of sunlight below the mountain peaks. The distance here is 170 miles.

Not the answer you're looking for? Browse other questions tagged atmospheric-science estimation geometry or ask your own question.

10
How far into space does one have to travel to see the entire sphere of earth?
4
How far does typical view of clouds/atmosphere extend?
11
If I were standing on the surface of the sun, how far could I see?
9
From how far away could Earth's telescopes detect Earth like radio signals?
0
Invariant Interval Interpretation
7
Why does an ice stupa not melt for 6 months?